SHE HAS only been living in Bratislava for three years, yet she has already published a photo book that illustrates her view of the Slovak capital. 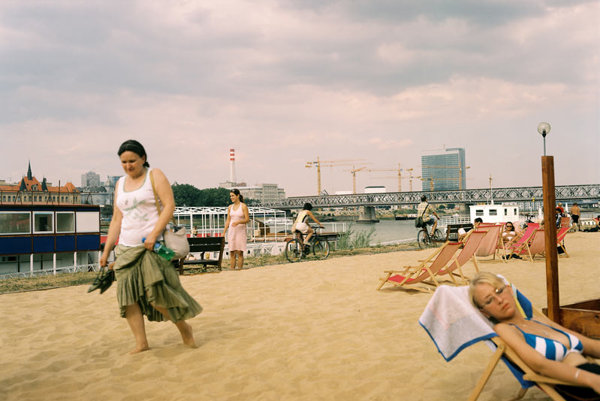 SHE HAS only been living in Bratislava for three years, yet she has already published a photo book that illustrates her view of the Slovak capital.

Her name is Illah van Oijen, and the photos from her book, Bratislava – mesto na mieru Urban landscapes of Bratislava, are on display in the Bastart Gallery in Bratislava.

The images hang alongside sketches from City Interventions, a project by architects Matúš Vallo and Oliver Sadovský that van Oijen is also involved in.

“I’m very proud to present this exhibition, because it will be the first time my photos are really shown in a gallery in Bratislava, which is different from seeing them in a book,” van Oijen told The Slovak Spectator. ”There will be one exclusively new picture I took just two weeks ago. The rest is all from the project.”

Van Oijen published the book in 2007 as part of her ongoing project Human Landscapes.

The young Dutch photographer came to Slovakia in 2005, but she had already been to this part of Europe in 1992, when she was just 11 years old. Her mother decided not to vacation in France that year because she wanted the family to see something different, so they set off for Czechoslovakia, which had just emerged from decades of Communism.

“It immediately challenged my visual perception,” van Oijen told The Slovak Spectator. “For me, this trip was a turning point.”

Few years ago, she found she had kept a whole collection of postcards from Spiš Castle, which proved just how large an impression the visit had had on her. So when the chance to go to Slovakia arose, van Oijen didn’t hesitate for a second.

Since arriving she has enrolled in a supplementary study programme at the Academy of Fine Arts and Design under the leadership of Ľubo Stacho.

“His style of teaching is to take students to workshops in the countryside,” van Oijen told The Slovak Spectator. “During the first year I was in Slovakia I travelled all the time. So I photographed a lot of countryside.”

Van Oijen said she enjoyed this time because the Slovak countryside looks very different from that in the Netherlands. But some people remarked that there is much more to Slovakia and asked why she wasn’t showing its modern side.

Van Oijen agreed, but didn’t know where to start. Then, in November 2006, she met Frits Gierstberg, the curator and director of the Fotomuseum in Rotterdam.

“He told me, ‘Illah, you have gold in your hands, pure gold,’” van Oijen recalled for The Slovak Spectator. “He said, ‘You are at the right place at the right time. But you have to go and look what is changing around you.’”

So she did. It was while travelling around Senec and nearby villages that she got the idea of portraying human landscapes.

“Because the idea, which is why my project is called Human Landscapes, is a very typical Dutch way of looking at the environment,” van Oijen told The Slovak Spectator. “Because we have so little land, and it is in danger of water, we are always working on it, cultivating it, and making it into something human. Nature has become a human fabrication.

“So I wanted look in that way at the landscape in Slovakia: to take a view of the city as though it was a landscape. It is not nature, but nature and culture. And how this culture reflects on what people think.”

The images in her photo book explore some of the sites Bratislavans take for granted or would rather forget. They examine the positive and negative sides of the city’s construction boom and show the remnants of socialist architecture, some of which van Oijen believes are worth preserving.
One of the photos shows the Hotel Kyjev, one of the most prominent examples of socialist architecture, covered with a large advertisement.

This photo shows something that bothers her about Bratislava. She delved deeper into the
issue of usage of large advertisements in Bratislava in her contribution to the City Interventions project. The architects invited 12 artists and architects to submit proposals on how to improve the quality of public space in Bratislava, which they offered to the city for free.

Van Oijen thinks that billboards should be used more sparingly.

“I’ve always wondered how the city can afford to have so many billboards on such beautiful places in the city,” van Oijen told The Slovak Spectator. “It is really changing the way the city looks.”

Her research on billboards found that cities in the Netherlands place a high administrative burden on companies that want to place them and have the right to deny permission for the signs.

Moreover, the Dutch population is more aware of what is being done with its public spaces, she said.
Van Oijen said her impression of public space in Slovakia is that the public doesn’t value it, or doesn’t feel it has the power to effect it.

“Participating in the democratic processes takes energy,” van Oijen told The Slovak
Spectator. “Read regulations and architectural plans. All this takes time, but it is the way.”