Brought down by his own ambitions

The Mafia career of Peter Čongrády ended at just past 10:30 on September 9, 2004 on a sidewalk in the Petržalka suburb of Bratislava. Čongrady had just arrived at his favorite pizza parlor and was getting out of his armor-plated Mercedes when he and his bodyguard, Marek Ivančík, were fired on by two unidentified men in Balaclava masks. Čongrády was hit by 12 bullets from an AK-47 machine-gun and died on the spot, while Ivančík took a bullet in the thigh but managed to escape. The assailants fled in a car with stolen Czech plates that was later found burned out at an intersection in the Lamáč suburb. 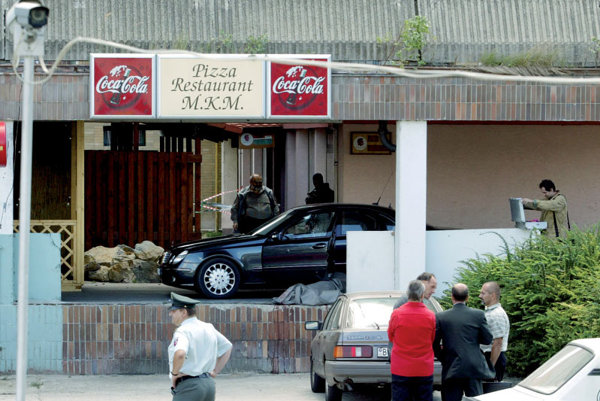 Ćongrády was killed by gunmen wielding an AK-47 outside his side his favorite pizza restaurant in PetrÏalka. (Source: SME, SLOVAK POLICE ARCHIVES)
Font size:A-|A+

The Mafia career of Peter Čongrády ended at just past 10:30 on September 9, 2004 on a sidewalk in the Petržalka suburb of Bratislava. Čongrady had just arrived at his favorite pizza parlor and was getting out of his armor-plated Mercedes when he and his bodyguard, Marek Ivančík, were fired on by two unidentified men in Balaclava masks. Čongrády was hit by 12 bullets from an AK-47 machine-gun and died on the spot, while Ivančík took a bullet in the thigh but managed to escape. The assailants fled in a car with stolen Czech plates that was later found burned out at an intersection in the Lamáč suburb.

Čongrády’s murder was the last major killing in the mafia war that erupted in Slovakia from 2003 to 2004, and which left bodies on both sides of the ‘Takačovci’ and ‘Sýkorovci’ organized crime families in the capital.

But whereas the killings of Ján Takáč and Jozef Surovčík in 2003 and Jozef Svoboda and Peter Havasi in 2004 had come as a surprise, Čongrády’s murder was perhaps less of a shock. As one of the most publicly visible members of the Sýkorovci mob, he had appeared on the now-defunct VTV channel, and had staged the takeover of the country’s most-watched TV station, Markíza.

Moreover, while people in Čongrády’s line of work have a notoriously short life expectancy, events apparently conspired to hasten his demise. According to a source from the police organized crime unit, Čongrády had borrowed Sk500 million from a powerful businessman to invest in Slovakia’s organized crime cash-cow, a scam in which cheap heating oil was chemically altered and sold as highly-taxed diesel. But a series of police raids on the olejári or ‘fuel scammers’ in the summer of 2004 led to 81 arrests and dozens of people being taken into custody, ending any chance for Čongrády to recover his investment and repay his sponsor.

“He knew he was going to die,” the source said. “But then, they all do when their turn comes.”

Čongrády grew up in an orphanage in the Zlatovce district in Trenčín in Western Slovakia. Curiously, he gave the address of the orphanage, Na Dolinách 27, as his permanent residence in 1997 when founding the CPKB and RAF firms.

He began as a driver for the founding father of Slovak organized crime, Miroslav Sýkora. A tough street kid with a burning desire to prove himself, he found favor with Sýkora, an alliance that was to give him great standing within the Sýkorovci.

A police source who handled organized crime cases in the 1990s said that Čongradý’s role within the Sýkorovci was largely a ‘human resources’ one. He would recruit new footsoldiers for the gang, but lacked the ability to generate money that the bosses did. He was also content to be the public face of the group while the real bosses (such as Ladislav B. or Robert L., a.k.a. kybel or ‘bucket’) remained in the background.

One of the most public events Čongrády was ever engaged in was the seizure of the Markíza commercial TV station on August 18 and again on September 15, 1998, only weeks before scheduled elections. A security company owned by Čongrády provided the muscle for the Gamatex firm to attempt the takeover of Markíza, the most-watched channel in the country, over an unpaid debt owed by Markíza owner Pavol Rusko. Misinterpreting the takeover as an attempt by the authoritarian Vladimír Mečiar government to stifle political opposition in the run-up to the elections (Markíza was visibly anti-government), opposition supporters rallied outside the station against Mečiar, while opposition politicians used the ‘crisis’ as a platform to address the public. During the constant coverage of the stand-off, Čongrády was visible at the elbow of Gamatex owners Marián Kočner and Štefan Agh (he and Agh actually co-owned the Property security firm).

“Mr. Čongrády worked for a security company that provided services for Gamatex, and that’s how I knew him,” said Kočner, who in 2006 ran for mayor of Bratislava. “Has anyone ever proved that he worked for the underworld?”

But Čongrády’s interests extended far beyond the media. He was an avid football fan, and along with mob boss Jozef Svoboda exercised significant influence over the management of the Slovan Bratislava club; he reputedly sponsored the club and had a hand in player transactions. For example, he stayed at the same hotel in England as the Slovan delegation at the time the club was negotiating the sale of footballer Robert Vittek to Birmingham (in the end Vittek was sold to Norimberg of the Bundesliga). In the evenings, Čongrády and Slovan officials met up for beer and meals at a local pub.

Following the sale of striker Szilárd Nemeth, Slovan Chairman Roman Dubeň was asked what role Čongrády played in talks: “It’s so complicated you wouldn’t understand even if I told you,” he responded. “But he certainly didn’t finance either Slovan or Vittek, and he wasn’t paid by Slovan to be there. It was his private initiative.”

Čongrády also provided ‘security’ to a number of pubs and restaurants in Bratislava’s Old Town from his base of operations at No. 5 Michalská Street, the green ‘Broker’ building. One of the pubs he allegedly secured, the Montana’s Grizzly Grill at Michalská 19, changed hands in 2002, with two men connected to the Sýkorovci taking over from US owner Ky Didier.

“All I ever heard was ‘Čongi, Čongi’,” said Didier at the time, admitting that he had been pressured to take on a silent partner, but denying that Čongrády’s men had pushed him out of his own pub.

By the end of his first decade in organized crime, Čongrády had money, power and friends in high places, among them former SME daily journalist Peter Tóth, who in 2004 became the head of counter-intelligence for the Slovak secret service, the SIS. His business interests had grown from pubs and security companies to the oil trade and real estate. “The Sýkorovci had their people in the city council who told them what lucrative properties were coming up for sale or rent,” said the police source.

Current Bratislava Mayor Andrej Ďurkovský had another explanation for the power of the Mafia in the capital. Asked to explain the claim of a political opponent, Peter Kresánek, that “these [organized crime] groups legally signed rental contracts on most of the buildings and public spaces in the downtown core”, Ďurkovský said it had not happened under his watch.

“It’s the result of ‘small privatization’ [an early phase in the sale of state property from 1991-93 that preceded the sale of major assets – ed. note], when rental contracts for these buildings were auctioned off and the people who came forward were those who had financial resources,” he said. “It wasn’t the best procedure.” Čongrády’s building at Michalská 5 is still owned by the city of Bratislava.

Čongrády’s brother-in-law, architect Branislav Kaliský, is another who has a number of firms registered at Michalská 5. Kaliský’s Respekt architecture office did the design work on the Eurovea project of Irish developer Ballymore, a Sk10 billion complex which is currently going up on the banks of the Danube River between the Old Bridge and the Harbor Bridge (Pristavný most). Kaliský led talks with the Interior Ministry on behalf of Ballymore to buy the Interior Ministry building near the Old Bridge, an aim which was later reduced to acquiring part of the ministry’s parking lot. According to the police source, Čongrády visited the ministry for talks in the early stages, but the deal was not closed until after his death.

“At our request, only employees of Ballymore Properties will take part in substantive negotiations with leading ministry officials, and only with them will the ministry sign any contract,” said then-ministry spokesman Boris Ažaltovič in December 2004.

Čongrady’s death thus came when he was at the height of his power. According to then-police vice-president Jaroslav Spišiak, his power was exactly what killed him.

“This was not a part of some mafia war, it was the elimination of an inconvenient person,” he said. “Regular members of the Mafia do what they do. But once they start to think that they have such a high social standing that they can permit themselves to conduct legal business deals, to enter legitimate society and even to interfere with the interests of state, it becomes a problem.”