DENMARK has its Roskilde festival, while Hungary waits the entire year for Sziget. In Slovakia, there is Pohoda. The country’s largest music and multimedia festival now has over a decade of rock, beer and sun-soaked attendance under its belt. Still, Michal Kaščák, the founder and main organizer of Pohoda, isn’t about to blow his own horn. Festivals, he says, are only a small part of the world of music. 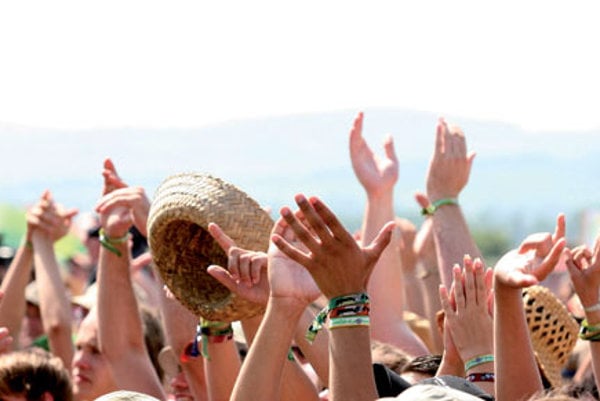 The Pohoda music festival, now in its 11th year, has become a mainstay of the Slovak cultural scene. Whatever its self-effacing organizer says. (Source: ČTK)
Font size:A-|A+

DENMARK has its Roskilde festival, while Hungary waits the entire year for Sziget. In Slovakia, there is Pohoda. The country’s largest music and multimedia festival now has over a decade of rock, beer and sun-soaked attendance under its belt. Still, Michal Kaščák, the founder and main organizer of Pohoda, isn’t about to blow his own horn. Festivals, he says, are only a small part of the world of music.

“The important thing for music is the club scene,” he said. “Festivals are just a highlight during the year.”

Pohoda is Slovak for ‘relaxation’, and maybe the language’s closest equivalent to the English ‘cool’. But soon, despite Kaščák’s modesty, dictionaries may be listing it as a synonym for an international music festival, thanks to the tremendous success of the event.

The story of Pohoda

The Pohoda tradition started in 1997 when Kaščák and a buddy, Mário Michna, staged a one-day event at the city stadium in Trenčín. The first edition of Pohoda hosted eight mainly Slovak and Czech groups on one stage.

“When I had a band, we always used to be jealous that in the Czech Republic they had a lot of festivals, while in Slovakia there were very few,” Kaščák said. And so he set out to redress the imbalance.

Today, the festival is his full-time job. Pohoda is the largest music festival in Slovakia in terms of both the number of visitors and the number of musicians and accompanying events, and is growing larger and more diverse every year.

The core idea was to stage a multi-genre festival, and Pohoda now includes rock, dance music, world music, reggae, ska and even classical and alternative music and a variety of other genres.

Last year, the number of visitors hit 27,000 a day, while in 2008 Kaščák says he would like to see 30,000. He notes that visitors include couples with babies and children as well as elderly people who attend the festival’s theater programs or classical music concerts.

“In Slovakia it used to be unusual for elderly people to attend festivals, but that’s gradually changing,” Kaščák said.

Last year’s Pohoda was the 10th anniversary edition of the festival. Over the years, Pohoda has brought many famous artists to Slovakia such as the Wu Tang Clan (in 2007), Garbage (2005) or the Cardigans (2003).

“We have a good reputation, so getting good bands to come is easy, but each confirmation is still a little cause for celebration, because the interest in such artists is enormous,” Kaščák said.
In the late 1990s, Pohoda was the only event of its kind in Slovakia, but those times are long gone. Public demand supports dozens of summer festivals that take place across the country every year. For the organizers of Pohoda, that means tougher competition, and even though Pohoda remains the premier music event of the year, Kaščák says he and his crew constantly have to work to improve the services offered and the entertainment on display.

“Even though we have more than 100 artists and different performances every year, we can’t cover everything. That’s why it’s good that there are other festivals too, local events that showcase local talents,” Kaščák said.

To maintain their position abreast of the competition, Pohoda’s organizers change the program significantly constantly, with at least 75% of the artists in any given year new to the festival.

The most attractive international artists at Pohoda 2008 will include Fatboy Slim, the Streets and the Editors. Among Slovak artists, this year’s headliner is Richard Müller, a gravelly-voiced troubador who is putting back together a career gone awry.

One of the more interesting headliner concerts will be a joint effort by the Royal Choral Society from the UK and the Orchestra of the Slovak National Theater. This summer, the 11th edition of Pohoda will take place at nine sites: two open-air stages, a dance hall, two festival arenas, a literature café, a cinema tent, and a dance house. According to Kaščák, the tent will be the largest Pohoda has ever seen. Besides music guests can enjoy music, literature, dance, and movies .
Kaščák said the most important guest at Pohoda 2008 will be Václav Havel who, besides serving as the first president of Czechoslovakia and later the Czech Republic after the revolution in 1989, also enjoys a solid reputation as a playwright. Two of Havel’s plays will be performed at Pohoda, while the former president will also be on hand for an autograph session, and the Citizen Havel movie will be screened.

“We’re very proud that Havel will be coming to our festival. He can make Pohoda shine even brighter,” Kaščák said.

After Havel confirmed, American folk star Joan Baez also agreed to attend Pohoda. Kaščák said that the two met in 1989, before the Velvet Revolution, when Baez gave a concert in Bratislava. She caused a stir at the time by greeting Havel, who then was a dissident, from the stage, and inviting another dissident, Ivan Hoffman, to play with her. The organizers responded by switching off the electricity in the hall.

This time around, Baez and Havel will be meeting under completely different conditions. It’s not just the absence of Communists and dissidents, of festival censors and political light systems - it’s also an audience with first-hand experience of democracy, tolerance and diversity.

Together with the summer sun, the music and the company, this will make for another pretty cool festival Pohoda.