As in each of the last 27 years, on the last weekend in August the Kremnické gagy (Kremnica Gags) festival of humor and satire will take place in the former mining town of Kremnica. 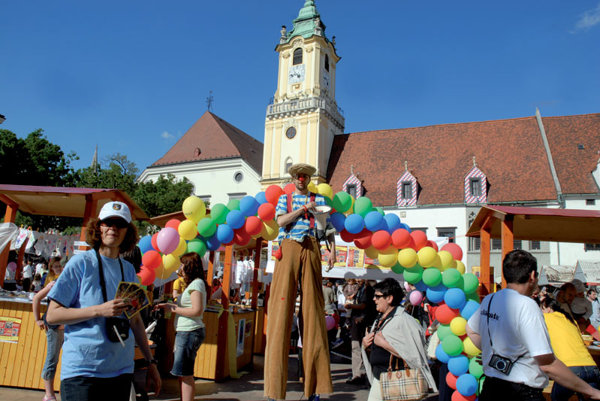 As in each of the last 27 years, on the last weekend in August the Kremnické gagy (Kremnica Gags) festival of humor and satire will take place in the former mining town of Kremnica.

But festival director Ján Fakla said that while the organizers wanted to grow the event, they were starting to feel their limits, “especially in terms of finances, personnel, and space.”

The 28th annual Kremnica Gags will feature artists from the Netherlands, England, France, Germany, Switzerland, Bulgaria, and Serbia, as well as some 300 performers from Slovakia. The aim of the event is to show off the best works of Slovak humor in all genres and as produced by both amateurs and professionals.

This year, the best recent artistic performances in humour and satire will be awarded in 10 categories. Apart from traditional theater, music, cabaret, puppet, and street performances, visitors will be able to take in various street improvisations and exhibits such as the Museum of Kitsch and the Alley of Famous Noses (more on these later). The shows will take place on 12 stages and platforms, and half of them will be free.

Fakla told Spex that more foreign artists will be on hand this year than last. “But the number is not as important as the quality. We try to choose the best pieces from abroad, even if they are not world-famous names.”

Amog the most interesting participants will be award-winning British mime Paul Clark, German puppet theater Zirkus Gockelini, and Portuguese street clown Enano, who applied to participate in Kremnica Gags on his own. “I don’t know how he found us,” Fakla said.

British puppeteer Cleve Chandler will be appearing with his Punch, Judy and Baby, while Osadia, a show put on by two barbers from Barcelona, will use volunteers from the audience to make up amusing hairstyles. The Olga trio from Amsterdam and the Slovak band Funny Fellows will perform a mixture of music, dance and slapstick.

From the Czech Republic, the De Facto Mimo theater from Jihlava will show off their classical silent slapstick comedies. Various music bands will play jazz on the main square.
Bad taste and kitsch will also be honored with an anti-prize, The Struck Goose.

This year, another nose will be ‘inducted’ into the Alley of Famous Noses, a sort of Hall of Fame for prodigious beaks that runs off the top of the main square. This year’s laureate is famous actor and humorist František Dibarbora.

Look out also for the opening of the Kremnica Museum of Kitsch, which contains some truly awful art, such as a stuffed fox wielding an axe and smoking a pipe.

The event gives a strong boost to the life of the town and the region. Last year, over 12,000 people flocked to Kremnica from across Slovakia to see 83 productions from 7 European countries. Artistic groups and solo acts performed at locations scattered around the center of town as well as on indoor and outdoor stages in squares and courtyards that had been specially adapted for the occasion. Accommodation and food outlets buzzed with festival activity, while local artists and cultural institutions got their day in the sun as well.

Money remains a problem, however, as the Culture Ministry grant covers only 15% of the total cost. The rest has to be raised by the organizers. And as the festival gets bigger and more Europe-wide, finding enough space for all the acts is also a challenge. Fakla said that Kremnica was bursting at the seams even last year.

“Kremnica has fabulous little corners and outdoor spaces, but it doesn’t have a single decent theater hall,” he said.

Organizers urged city leaders in Kremnica to reconstruct the town cinema, but were told that while a larger hall might serve the needs of the festival, it would not be fully used the rest of the year, and therefore was not a sensible investment for the town.

The Kremnické gagy festival was launched in 1981, but the idea of organizing a festival of humor and satire was kicked around in the late 1970’s in the “Kremnica underground”. We can only wonder what those rebels would have thought of Kremnica Gags today, and how their fringe event has transformed into a major event on the Slovak cultural calendar. n