GETTING a grenade in your spaghetti isnot most people’s idea of the perfect night out. While mercifully rare, it’s anoccupational hazard for the growing number of Slovaks working abroad as election observers in some of the world’s more dangerous places.One of them is Alexander Matúš, a Slovak observer with several years’ experience who recently returned from a three-month stint in Pakistan. 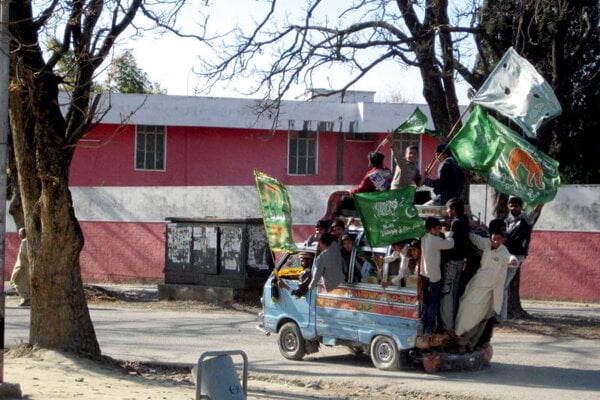 GETTING a grenade in your spaghetti isnot most people’s idea of the perfect night out. While mercifully rare, it’s anoccupational hazard for the growing number of Slovaks working abroad as election observers in some of the world’s more dangerous places.One of them is Alexander Matúš, a Slovak observer with several years’ experience who recently returned from a three-month stint in Pakistan.

While there, he coordinated the work of dozens of international volunteers monitoring the country’s parliamentary elections in February. A few days after he left, the pasta restaurant in Islamabad where he and fellow-observers had met for a meal was the target of a grenade attack, which killed one international aid worker and left ten others injured. But the narrow shave isn’t deterring him – or other Slovaks – from taking part in democratization efforts around the world.

Slovaks on the world stage

International election observing is a growth business and one in which Slovaks are playing a significant role: Matúš is one of perhaps twenty who now regularly participate in observer missions. Not least, this is because of Slovakia’s own relatively recent – and successful – experience of democratic transition. Despite some wobbly moments, Slovakia’s post-communist experience of democracy has been a relatively smooth and happy one. Their faults aside, politicians can take a large chunk of the credit for this. Since 1990 they have respected the result of every election held here, a far cry from the continuing travails of some other post-communist states such as Georgia and Armenia in just the last few months. Also doing their bit have been Slovakia’s democratic activists, election workers and observers. In the early days they studied how other countries did it, and then brought that learning to bear here. Ever since, they’ve helped to ensure that Slovakia’s electoral machinery functions properly. Their experience is now in demand further afield. Several are now fanning out across the globe
to monitor other countries’ sometimes painful efforts to democratize. One of them is Matúš.

A former post office employee, Matúš was seconded in 1996 to the Universal Postal Union,the Bratislava-based regional office of the UN’s specialized agency for posts. This gave him the opportunity to travel widely in Europe and the former Soviet Union.

Armed with an interest in politics and the experience his new job brought, Matúš joined a Slovak NGO, Občianske oko (Civic Eye), and helped observe the 1998 Slovak elections. Then came an opportunity to start taking part in international observer missions, beginning with elections in Bosnia in 1999. Since then he’s worked in Kosovo, Serbia, Ukraine and Georgia
as well as Ethiopia, Yemen, Bangladesh, Liberia and Sierra Leone. Since 2004 he’s been a freelance election observer.
Observing has become big business since bodies like the European Union and the Organization for Security and Cooperation in Europe (OSCE) started organizing missions in the 1990s. They began in Europe, but now operate worldwide.
Observer missions are typically divided into three elements: a core team, normally in the capital, which coordinates the whole effort; longterm observers, who visit the subject country several weeks ahead of the election to observe preparations and other elements such as media coverage; and short-term observers, whose main job is to monitor the process of voting and
counting during the election itself.

Matúš points out that, on election day especially, observers’ main role is, as their name suggests, just to be present, and observe. “Fraud detection is not the observer’s main job,” he says. “More, it is to deter fraud and check the reliability of the electoral process.” He says that isolated incidences of bad practice are fairly common, but that monitors rarely witness outright fraud. Nonetheless it does sometimes happen. “Georgia [in November 2003] was a really bad election,” he says. “You don’t normally see open manipulation or fraud, but in this case, ballot boxes were being stuffed [with fake votes]
and ballot papers stolen.” Outrage at the voterigging led to the Rose Revolution, the overthrow of the then-president, Eduard Shevardnadze, and the subsequent annulment of the elections. While most missions pass off safely – some have even been criticized as well-paid ‘junkets’ for observers - others carry significant risks. Matúš’ most recent mission, to Pakistan, is a case in point.

Pakistan’s recent history epitomizes that favorite euphemism of political commentators, ‘troubled.’ It has lurched between bouts of unstable civilian administration and harsh military dictatorship, interrupted by wars, coups and political assassinations. The country nevertheless has what is, by Asian standards, a fairly long, though patchy, record of holding
elections. This year’s polls were intended to mark the latest transition from military dictatorship to civilian rule. Matúš describes the security situation in Pakistan as being “quite tense” when he arrived there.After flying out in early December 2007 for what was intended to be a six-week mission as a member of the core team, he ended up spending over three months in Islamabad. The extension came after a leading candidate, former Prime Minister Benazir Bhutto, was assassinated at an election rally in nearby Rawalpindi in late December. Her killing led to the postponement
of the elections and left Matúš and other observers waiting in the capital. Though the Islamabad restaurant attack
seems to have been the only time in the election period that foreign civilians were directly targeted, the campaign was marked by a spate of suicide bombings which meant observers faced travel restrictions. “Of course, there’s always a risk – and especially so in Pakistan,” remarks Matúš. “The events [a series of riots] following Benazir Bhutto’s assassination showed that things could turn violent very quickly.” Nonetheless, he says the effects of violence were less visible in Pakistan, a country of around 170 million people, than in some other places he has visited. In Liberia, where he observed the 2005 presidential and parliamentary elections, and again in Sierra Leone, in 2007, limbless civilians mutilated by one armed group or another were a common sight, Matúš says.

The criteria used to select observers for missions differ –there are typically representatives from a host of European
countries – but Slovaks offer some distinctive qualities. “Of course that’s the added value you bring tothe mission: your own experience might make it easier to understand the politics or situation in a country which has had a similar experience,”
Matúš explains. He points to the Balkans and the former Soviet Union as regions where shared experience of socialist rule makes Slovak involvement particularly valid. It‘s a characteristic other Slovaks have built on. The Pontis Foundation, based in Bratislava, is an NGO with programs focused on democratization abroad, in particular in Serbia, Belarus and Cuba. Vladimír Vladár, a manager at Pontis, points out that these countries are also the focus of official Slovak foreign policy.
Vladár says that Slovakia, though not unique among former socialist countries, has the capacities – knowledge of the environment, access to local contacts – to make its assistance in these areas tell. In fact, Slovakia has become a significant
player in official European policy towards the western Balkans: Vladár points to the achievements of Slovak diplomat Miroslav Lajčák, who is now the International High Representative for Bosnia and Herzegovina. Personalities and contacts are also important. Organizations like Pontis have been developing contacts in places like the Balkans since the
1990s, and Slovaks have had a relationship with Yugoslavia going back since before 1989, not least as holidaymakers.
Observers point out that in places like Serbia, where lectures on democratization from America or other western countries are not – to put it mildly – particularly warmly-received, it can be easier for Slovaks to offer advice given that their
own country has overcome the challenges of transition and achieved concrete results.

As events in Zimbabwe – or, closer to home, in Belarus and Armenia – have recently shown, democracy has a long way to go in many parts of the world. But in spite of the occasional risks and the itinerant lifestyle, Matúš says he plans to continue observing. After all, he points out, the results are sometimes very positive. The Pakistan elections have, to the surprise of many, led to a civilian government taking office. The frequent suicide bombings seem to have stopped, at least for now. And, Matúš points out with a hint of pride, the response of all the major political parties to the work of the mission which he helped to organize has been overwhelmingly positive.