Her century in Bratislava

She saw the Austro-Hungarian monarch Charles Habsburg pass by in an open car on Štefániková Street in Bratislava following his coronation, accompanied by crown prince Otto von Habsburg. 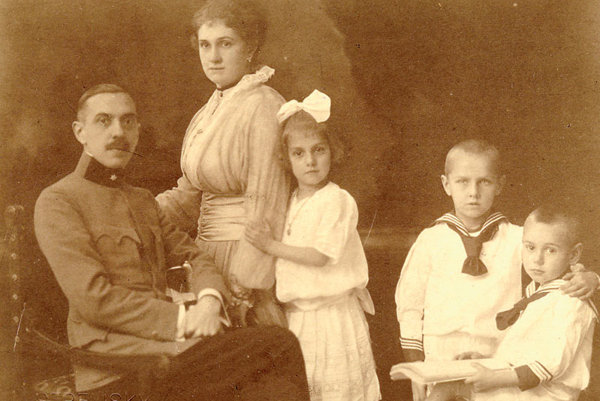 The Kállay family was a happy one under parents Margita and Ferdinand.
Font size:A-|A+

She saw the Austro-Hungarian monarch Charles Habsburg pass by in an open car on Štefániková Street in Bratislava following his coronation, accompanied by crown prince Otto von Habsburg.

During the air raids in the Second World War, she used to hide from the bombs with her family in the tunnel under Bratislava castle. In the house where she lived with her husband and children during the war, her brother hid a Jewish family from the authorities.

During the long period of totalitarian regimes in her country, lasting almost five decades, she gave her students not only a whiff of forbidden Western Europe, but also a feeling of continuity with the Austro-Hungarian monarchy. And when the totalitarian regime fell in the Velvet Revolution, she followed events very closely through the live reports on television.

At the age of 95, she was still doing her own shopping. Small, fragile, and hunched, but always smartly dressed, friendly, and smiling. Over the years, she taught English and German to dozens of students out of her flat, until the age of 97. Unafraid of change, a few days before her death she was Skyping with her granddaughter.

When she was finally brought to the hospital in January 2008, she told the doctors and nurses that she would only be staying for a short time, as she would soon recover, and would live to be 100. But at the age of 98, a rich life behind her, she died.

Margita Kállayová-Tichá was born in Bratislava on July 23, 1909. Her father, Friedrich Tichý, was a bank clerk at Tatra banka, and later became the bank’s director. At home they spoke German and Hungarian, the way many older, respectable Bratislava families did.

They lived in a flat belonging to Tatra banka. Now, the building is home to the Culture Ministry on Námestie SNP.

When the Austro-Hungarian monarchy fell apart and Czechoslovakia was founded in 1918, Tichý started learning Slovak. The headquarters of Tatra banka was in Martin, and as his colleagues from Martin all spoke Slovak, Tichý had to go with the flow. He was given the assignment of founding a Tatra banka branch in Bratislava.

In 1885, the bank’s founder, Rudolf Krupec, launched the Bank Tatra in Upper Hungary as a Slovak bank within the empire. After 1918, Tatra banka became the bank with the most branches in Slovakia.
Margita Tichá attended a secondary boarding school in Pressbaum near Vienna. The school was run by the Sacré Coeur Catholic order, which meant that the teachers were nuns. They stressed the learning of languages, especially French and English. German, of course, was the teaching language. The school still exists.

In 1926, Friedrich Tichý died suddenly of a ruptured appendix. By then, Margita was 17, and had three siblings. Due to her excellent academic results, Margita was allowed to finish her education for free, even though it was a private school. After passing her final exams, she returned to Bratislava.

Her daughter says that as a child Margita dreamed of becoming a teacher. She used to play at being teacher with buttons. She would place the buttons on the table, pretending that they were students, and then would deliver her ‘lessons’. It was an unusual dream at a time when girls were not encouraged to study.

When she was 20, Margita took a job at the Kablo factory, which produced cables and had been founded in Bratislava in 1895, near the present-day bus station. The factory, known as Káblovka, played a major role in brining electricity to Slovak territory.

Margita served as the secretary to the Kablo director. She wrote letters using her fluent German, Hungarian, and English. A young man named Ferdinand Kállay was also working for Káblovka at the time as clerk. A friendship between the two blossomed into romance. In 1932, at the age of 23, Margita married Ferdinand Kállay in St. Martin’s Cathedral in Bratislava.

The Kállays often went on business trips together, visiting destinations across Europe. In 1937, Margita gave birth to a son, Peter, and three years later to a daughter, Felicitas. But the death of her mother in 1938 left her with the care of her youngest sister, Babci, an orphan at 16.

At the time the war broke out, Margita and Ferdinand lived in a villa on Čelakovského Street. After her father died they had bought a house on Baštová Street in the very center of Bratislava, where two of Margita’s brothers also lived with their families.

Margita was at home with her children when the Apollo refinery was bombed by the Allies in 1944, and exploded. Apollo was near the Kablo factory, where her husband was supposed to be working. Margita feared that the worst had happened to him, but the Kablo employees had been warned before the air raid on Apollo, and had managed to escape.

During the air raids, Margita used to hide with her children and sister in the nearby tunnel under the Bratislava castle, which served as an air-raid shelter. Today, the tunnel is a tramway under the castle hill.

In 1944, when Slovakia’s Jews were being deported, she saw soldiers take the family of the Tatra banka director, a Jew who lived on the next street over. The mother of the family begged the soldiers not to take her children, but they pushed her away, put the two children on a truck and drove away. The director’s wife ran down the street, crying for her children, long after the truck was gone. Later, both she and her husband died in a concentration camp. Margita told this story occasionally to her daughter.

Towards the end of war, Margita and Ferdinand were evacuated with their children to a nearby village, which is now called Mariánka. Their house on Čelakovského Street remained empty. When they returned, they found that the Soviet army had set up its headquarters there. The Kállay family was allowed to take only a few belongings, so they took one of the children’s beds, loaded goods on it, and moved in to the house on Baštová Street.

The Kállays never moved back to Čelakovského, nor did they ever see the things they left there again. The deduced that a neighbor on Čelakovského had denounced them for speaking German and Hungarian at home. After the Communists took power in February 1948, the house was administered by the National Committee (i.e. a local office headed by communists). Later, circumstances forced the Kállay family to sell the house very cheaply to a tenant who had moved in.

In February 1947, they moved from Baštová to Puškinova Street, into a flat belonging to the Kablo factory.

Although they still spoke German and Hungarian among themselves, Margita sent both of her children to Slovak schools so they would learn to master the official language. Kállay was offered a position in England, but refused, fearing that he would end up remaining in exile with his family.
The Kállays tried to shut out the violence and stress of the 1950s, with its cult of Josef Vissarionovič Stalin, its political trials, political prisoners, and executions, by meeting up with other families. They played cards, bridge by preference, while the children play-acted or learned to play musical instruments. The audiences for these concerts included Ľudovít Rajter, one of the most famous Slovak conductors and classical music composers, who died in 2000.

Meanwhile, Margita passed her state exams in English and German, and started teaching privately in her flat. At first her students were children, but later she taught adults as well. It was a career that sustained her almost until her death. She ended up teaching mostly conversation, sometimes even to the grandchildren of her original students from the 1950s. She tried to make her students forget their fear of talking and of making mistakes. She motivated them to speak, and they were often delighted when they found out they could actually use the grammar they had learned.

During these conversations, her students also expressed things they needed to talk about, private matters. Several students came back later to thank her for the personal advice she had given them. Among her students were Professor Peter Strmeň, an ophthalmologist; the current chief architect of Bratislava, Štefan Šlachta; and the famous actor Juraj Kukura, who took lessons from her before emigrating to Germany.

Following the invasion of Czechoslovakia by Warsaw Pact troops in August 1968, Margita’s son Peter emigrated to Switzerland with his family. Margita deeply regretted losing contact not only with her son, but also with her grandchildren. Peter did not return to Bratislava for 20 years, at Christmas 1989.

Margita remained fascinated by anything and everything that was new until the end of her days. She travelled to Torino with her father to buy her first car in the 1920s. It was a cabriolet, and on the drive back to Bratislava they wore leather caps on their heads to protect them from the wind and dust. They were one of the first families in Bratislava to have a telephone, and their home number was 26.

After the Internet came to Slovakia, she asked her daughter, a biochemist, what ‘the www’ meant. In the same way she had wanted to know what principle the fax operated on, or how satellites worked.
She lived with her husband for 55 years until Ferdinand Kállay died in 1987. After the funeral, she went to see her son and to travel with him across the US. (As a pensioner, she was allowed by the Communists to travel abroad from time to time.) She put away her black clothes, saying she wore her grief for her husband inside her.

She reminisced about her husband in the best possible way. Her daughter says their marriage was without arguments, an almost ideal union full of love and respect for each other.

To celebrate her 90th birthday, her children took her to the famous fish restaurant in Fischamend, which she used to frequent during her school years in Pressbaum. Fischamend is a small town at the confluence of the Fischa and Danube rivers, a few minutes by car from Vienna.

Margita told the restaurant owner that she used to come there as a child, and that the boss had been a tall, large woman in a long white apron who smoked cigarillos. “Yes, that was my grandmother,” replied the owner.

Margita’s 90th birthday celebration continued in the south of Slovakia, in the village of Michal na Ostrove. Her grandfather, a doctor, had worked there, and his brother, a priest, also lived there. During the First World War, the village bell was melted down to make cannon balls. In the 1920s, after the war, Friedrich Tichý as the director of Tatra banka gave the village money to make a new bell.

Margita was a very strong personality. She was fond of saying that things were not so bad that they could not be worse. Dozens of her relatives and students visited her, took advice from her, respected her and liked her. She died in January 2008, having failed to reach the age of 100. If she were still around to give an opinion, she might agree that she could have done a lot worse, both by herself and by the many people who loved her.