JunifestThe fifth edition of the national beer festival, inspired by the famous Oktoberfest in Munich, offers its visitors more than beer and klobasa. Junifest also offers fun events and concerts by some of the biggest music stars from the Czech and Slovak republics. 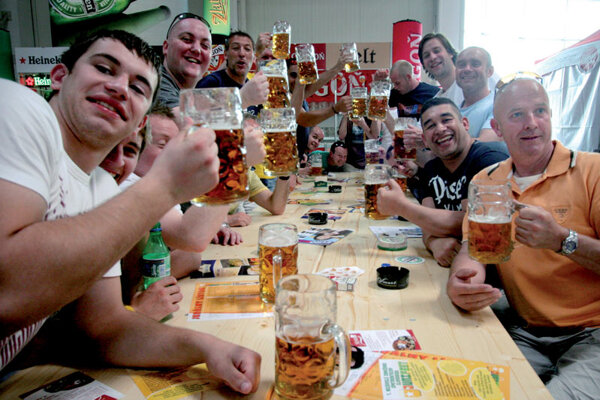 Junifest is beer and lots else. (Source: SITA)
Font size:A-|A+0

The fifth edition of the national beer festival, inspired by the famous Oktoberfest in Munich, offers its visitors more than beer and klobasa. Junifest also offers fun events and concerts by some of the biggest music stars from the Czech and Slovak republics.

Farmers and other brave men and women will meet in the picturesque village of Terchová to take part in the ninth annual Slovak and World Grass Cutting Championship, in which contestants compete to see who can cut the most grass with a scythe. Spectators can compete in throwing the traditional axe, known as a valaška, or in wood cutting.
When: June 21
Where: near the Gavurky hotel in the village of Terchová
Tel: (041) 569-5129
www.terchova.sk

The first and only concert in Slovakia by this heavy metal legend features the band’s original lineup.
When: June 16, 18:00
Where: Incheba Open Air, Viedenská Cesta, Bratislava
Tickets: Sk890-Sk1,090.

Guitar magician Carlos Santana will arrive in Slovakia to give his first concert in this country within his Live Your Light Tour. Santana will play his biggest hits Black Magic Woman, Smooth and Maria Maria.
When: June 26, 20:00
Where: Inter sports stadium, Bratislava
Tickets: Sk1,499-Sk3,499

Fans of military history will re-enact for the sixth time the siege of Bratislava in 1809 in Sad Janka Kráľ, the large park on the Petržalka bank of the Danube.
When: June 27-29
Where: Sad Janka Kráľa, Petržalka, Bratislava

The English rock legend, which bassist Alan Lancaster and guitarist Franciso Rossi launched in 1962, plays in the Slovak capital within its tour promoting its latest album In Search of the Fourth Chord.
When: July 1, 20:00
Where: The Sibamac Arena, The National Tennis Center, Príkopova 6, Bratislava
Tickets: Sk1,399-Sk1,699
Tel: (0903) 486-624

The romantic castle of Bojnice will again host a festival of fairy tales. This year the festival will be dedicated to the fairy tale Alice’s Adventures in Wonderland. During their tour of the castle, children will discover that an evil queen has conquered the castle and closed it to everyone, especially to children. Alice will get into the miraculous castle, which is hidden behind a mirror. But the evil queen will break the mirror and scatter its 10 pieces across the castle. For Alice and the children there is no way back. They have to find all 10 mirror pieces and in this way overcome the power of the evil queen. Children will help Alice in this difficult task. On their way through the castle they will meet a bear, a cat, a butterfly and other fairytale creatures. They will also have to cope with the spells and ploys of the evil queen. In the end they will find with Alice all 10 mirror pieces, break the wicked spell cast by the queen, and return the castle to the people.
When: June 19-22, June 26- 29
Where: Bojnice Castle
Tickets: Sk200 (adults), Sk100 (children)
www.bojnicecastle.sk

Dogs of various breeds and countries will compete for the top titles. The Slovak Agility Championship is part of the event.
Where: Incheba, Viedenská Cesta, Bratislava
When: August 16-17
www.skj.sk