When 'beggar' is a compliment

THE 14th International Festival of Local Television, which took place in Košice from June 18 to 21, proved that local reporting doesn't mean airing stories about cowsheds and kindergartens. Established in 1995 to "celebrate, popularise and support European local TV broadcaster production," the Golden Beggar festival, as it's also known, offers journalists from around Europe a forum for presentations, constructive discussions and networking. 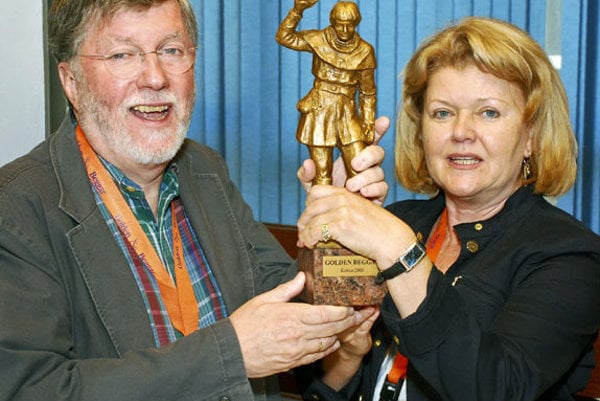 THE 14th International Festival of Local Television, which took place in Košice from June 18 to 21, proved that local reporting doesn't mean airing stories about cowsheds and kindergartens.
Established in 1995 to "celebrate, popularise and support European local TV broadcaster production," the Golden Beggar festival, as it's also known, offers journalists from around Europe a forum for presentations, constructive discussions and networking.

“Our original idea was mainly to bring together TV professionals from different countries so that they can compare their work and get to know each other,” said Eva Děkanovská, the festival's manager.

“Later, though, we started to focus on topical issues and tried to come up with the best model for providing local spectators with both interesting and comprehensible reports. Gradually, a number of accompanying events were incorporated, and now we present not just local TV makers, but also graphic designers, painters and photographers.”

Every June, around 150 participants come to Košice to take part in the Golden Beggar, which represents more than 70 local television stations from around 25 countries. Moreover, it is the only event of its kind in Europe, since no similar festivals have survived longer than a few years.
Two years ago, the organisers even decided to expand the festival's influence by extending it to several other cities.

“Although preparing such a large event requires a lot of time and energy spent writing projects, searching for sponsors and arranging all the necessary details, our intention is to continue making local television production more accessible,” Děkanovská told The Slovak Spectator. “So far, we have managed to organise a few presentations in different European towns and we will certainly not give up this plan.”

This year’s Golden Beggar was similar in attendance and organisation to past years. There were, however, some innovations, Děkanovská said.

“For the first time in the history of our festival, production companies and young authors competed within their own respective categories,” she noted. “We felt that these people had lacked a forum to present themselves and so we decided to award three golden statuettes instead of just one. Apparently, it was a good idea, since the festival had a younger spirit, which all the participants seemed to notice and appreciate.”

The ASKA Production Company from Slovakia was awarded a Golden Beggar for its documentary about two blind, singing siblings. Slovak director Katarína Kočálková received a golden statuette for her portrait of Slovak writer Božena Slančíková–Timrava.

But the Grand Prize went to TV Etalon from Romania for a documentary titled The Humoresque.
“It is a story of a 94-year-old woman whose life had been exhausted by the systems she lived under, especially communism,” said Ed J. Baumeister, a renowned American journalist who regularly presides over the festival jury. “At the end of her days, the woman has nothing - not even enough to get herself buried. She therefore marries in order to get a marriage benefit of €200 to provide the wherewithal, which is approximately €65. And she dies just after getting married.”

According to Baumeister, such a brief synopsis can hardly provide an accurate picture of such a "brilliant" film.

“It used what is called ‘delayed decoding’ - leaking the story out piece by piece,” he explained. “By the time you see her get married, you are not at all angry with her for using the system to get a welfare benefit; you are angry at the system that left her in such a desperate situation. The filmmaker treats the woman with the utmost respect, and the film is quiet and almost ironic. But we liked it most of all because it was a local story so beautifully rendered.”
Baumeister also said that the Golden Beggar festival had had a crucial role in the progress of local TV producers and professionals.

“Over the last decade and a half, we have seen the local television programmes in Europe improve; we know we have some role in that,” he told The Slovak Spectator. “For example, we see last year’s winning techniques adopted in films that came this year.”

Baumeister expressed his belief that local media are of the utmost importance to today’s society.
“The commitment to being local will, I think, give local television its future,” he stated. “No national or international broadcaster is going to come to Hlohovec or Moldava nad Bodvou regularly to make stories. As the media space becomes larger - and to some of us more confusing - programme producers who target local audiences with local content should always have a space. It’s to their competitive advantage.”

Roger Worrod, a British actor, writer and director who has been participating in the Golden Beggar festival for several years, said that work by local television stations had experienced a marked change during that time.

“Four or five years ago, there were a lot of humorous films and comedies at the festival, coming mostly from the Balkans, but also from Slovakia,” he told The Slovak Spectator. “Nowadays, the situation has changed; their optimism has somehow died away. However, what all these films certainly do not lack is a rich imagination, and this is what's most crucial.”