SLOVAKIA officially designated the language of Europe's most deprived minority, the Roma, a standardised European language on June 29. As well as enabling the language to be preserved and taught at schools, the designation strengthens the identity of the country's 300,000-strong Roma community, its advocates say. “We have now created the conditions for the development and preservation of the Roma language,” Anina Botošová, the government's proxy for Roma communities, told The Slovak Spectator. 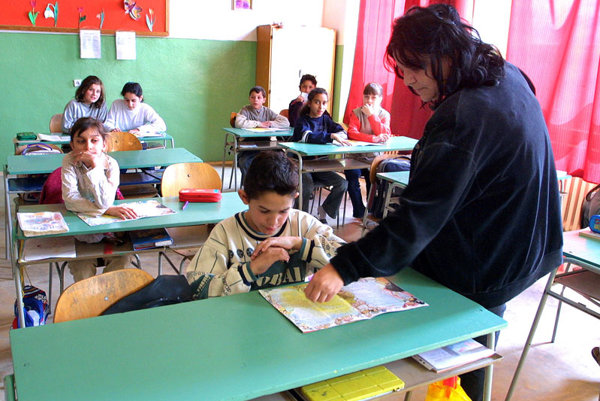 SLOVAKIA officially designated the language of Europe's most deprived minority, the Roma, a standardised European language on June 29.
As well as enabling the language to be preserved and taught at schools, the designation strengthens the identity of the country's 300,000-strong Roma community, its advocates say.
“We have now created the conditions for the development and preservation of the Roma language,” Anina Botošová, the government's proxy for Roma communities, told The Slovak Spectator.

This is important not only for the Roma community, but also for the non-Roma population, said Erika Adamová, spokesperson for Dušan Čaplovič, the deputy prime minister for minority rights.
But state officials acknowledge that the issue of Roma identity will continue to require significant attention.

There is still a lack of Roma language teachers or experts in Slovakia, Adamová told the SITA newswire.

However, the government plans to introduce state language exams in Roma.

“And so I will, as long as I live, fight for this language,” Dezider Banga, a Roma writer whose mother tongue is Roma, told the private Markíza TV channel.

But not everyone from the area of Roma rights is so hopeful about the designation.
Alexander Patkoló, the head of the Roma Initiative of Slovakia, said neither the Slovak educational system nor Roma people themselves are truly prepared to accept the Roma language and begin teaching it.

“Let's not get carried away," he told the Czech daily Hospodářské Noviny on July 1. “It means nothing right now, just a glimmer of hope for the future."

Klára Orgovánová, who preceeded Botošová as government's proxy on the Roma, said that the standardisation process began in the 1970s.

Under the leadership of the linguist Milena Hübsch-manová, a Roma dictionary, grammar book and textbook were prepared as early as the 1970s. The Eastern-Slovak Roma dialect, which is spoken by 85 percent of the Roma population in Slovakia, was used as a basis for the materials.

“This Roma is the closest to what's spoken by Roma in other European countries,” Orgovánová told The Slovak Spectator.

But Slovak Roma speak several dialects, and those from the west have refused to use any dialect expect their own, she said.

Orgovánová continued Hübschmanová's work, publishing a book of Roma grammar and a dictionary in 2002 .

Her office also co–operated with the State Paedagogical Institute on a 9-year experiment to teach Roma language and literature at elementary and secondary schools.

Zvolen, at the elementary school in Angyalova Street in Kremnica, and at the bilingual secondary grammar school in Novohradská Street in Bratislava.

Since then, 25 Roma language teachers for secondary schools and colleges have become certified.

The eastern Slovak dialect is also used in the newspaper Romano Nevo l'il and has been used in performances by the Romathan theatre ensemble.

Eva Davidová, a renowned Czech researcher of Roma issues, said at the official designation ceremony that a standardised language and a willingness to identify as Roma would move the Roma community closer to becoming fully–fledged citizens.

The effort to unify the Roma language began in 1954, when a commission suggested that the language be officially acknowledged. In 1972, an orthography was formed and the language was codified, but it did not spread widely.

The Slovak Roma language is one of the three main dialects spoken by Roma in the former Czechoslovakia, according to an article published earlier this year in Romano Nevo l'il .

Another dialect spoken in the south and southwest of Slovakia is the ahi dialect, which was influenced by Hungarian, but is quite close to Slovak Roma.

The third dialect, which is found across this entire region, is Olaš Roma, which has some elements in common with Balkan languages, save several ancient characteristics.
Until recently, Roma was only a spoken language.

Various Roma dialects spoken in various countries around the world are written in a different form. These differences, as well as discrepancies in pronunciation, led the International Romani Union , and some Roma experts to attempt to create a unified transcription of the Roma language.

The last version of this transcription was proposed by Marcel Courthiade and approved by the International Romani Union's Commission for the Standardisation of Roma Language at its 4th Congress in Warsaw in 1990. This standardised written form drew on the Latin alphabet, which enabled a unified writing of all dialects of Roma, while preserving their phonetic differences, according to Romano Nevo l'il.