THOUGH the arts from Russia are not presented in Slovakia – nor the arts from Slovakia in Russia – to the same extent that they were before 1989, the last few months have witnessed several bilateral cultural events. 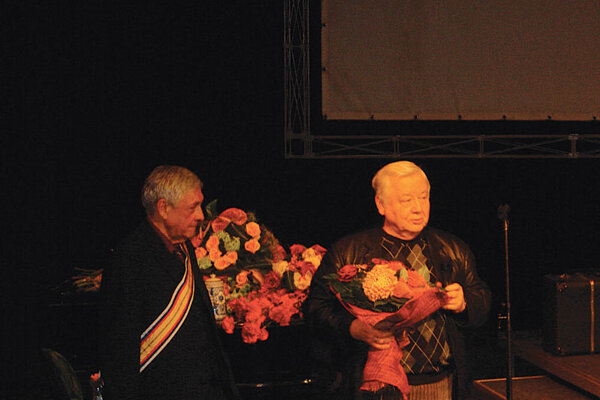 THOUGH the arts from Russia are not presented in Slovakia – nor the arts from Slovakia in Russia – to the same extent that they were before 1989, the last few months have witnessed several bilateral cultural events.

On December 14, 2007, the famous MCHT Moscow theatre organised an evening of performance to celebrate the work of Slovak playwright Osvald Zahradník. The evening was prepared by famous actor and director Oleg Tabakov, and hosted by the equally famous actress Irina Miroshnichenko.

This March, in Bratislava, a Dictionary of Russian literature from the 11th to the 20th centuries was published. It is the first detailed dictionary in Slovak of another nation’s literature and is the result of seven years’ work by thirteen authors. The head of the team was Oľga Kovačičová.
At the beginning of April, a book by theatrologist Dagmar Podmaková, Osvald Zahradník and his predecessors; a long pre-history of the staging of Solo for Percussion, was published in Slovakia. It was also published in Russian by Moscow publishing house Indrik.

Slovak theatrologist Nadežda Lindovská says that in some ways Slovak interest in Russian literature is more qualitative, as it is not affected by political impulses, but is rather a reflection of people’s genuine interest.

“But contact with the Russian cultural and theatre environment is currently rather complicated,” Lindovská told The Slovak Spectator, adding “there are various visa requirements and similar barriers".

Lindovská noted that although Russians themselves do not show much interest in Slovak theatre, Slovak dramatist Osvald Zahradník belongs among the most renowned playwrights in Russia, whose dramas have been performed almost continuously since the first staging of Solo for Percussion.
“His Solo for Percussion is a cult play and the staging of this play in the MCHT in 1973 has become a legendary event,” Lindovská stressed.

“For many actors, it was their swan-song,” she added. This included actors who worked with famous directors and teachers Konstantin Stanislavsky and Vladimir Nemirovich-Danchenko, the founders of the MCHT.

“This staging has remained a legend to this day, and Russian TV channels still screen the black-and-white recording of it,” Lindovská said.

Irina Miroshnichenko, who hosted the evening celebrating Zahradník’s work last December, is currently the only living actress who played in the 1973 performance.

Last December, Zahradník was awarded a major state prize, the order of Peter the Great.
Zahradník himself cannot explain his success. According to him, Solo for Percussion’s early success was a response to the noisy, busy plays being staged at that time, especially in the countries of the Soviet bloc: “Canteens selling alcohol were torn down with bulldozers, party leaders and commissions held meetings,” Zahradník recalled for The Slovak Spectator. “And suddenly, this general fist-thumping and noisy criticism and argument were replaced by a quiet, brooding play dominated by ‘former people,’ i.e. pensioners recollecting old times.”

It is interesting that another Zahradník play, Name for Michal, set in the Second World War, was prohibited for a long time during the communist regime in Slovakia, but successfully staged in Russia. “I have never learned why that was. They started rehearsing it in the National Theatre, and then it was stopped and not allowed to be played,” Zahradník told The Slovak Spectator.

Zahradník’s play We Will Fly to Milan has been staged five times at Mosow’s Gogol Theatre since 2000. In Slovakia, no professional company has yet performed the drama.

According to Podmaková, speaking to private TV channel TA3 in May 2008, Zahradník is so popular in Russia because he “brings in his plays a quiet conflict, or the position of the older and younger generations.” She added: “We have problems establishing ourselves in contemporary drama in Russia, as they have many authors compared to us.”

Igor Skoček, head of the Press and Communication Department of the Slovak Foreign Affairs Ministry, said the cultural exchange between Slovakia and Russia is quite intense. Speaking to The Slovak Spectator, Skoček noted that two years ago an anthology of Slovak poetry was published in Moscow, entitled Z veku do veku vyšla (From Age to Age She Came). It was followed this year by an anthology of Slovak novellas of the 20th century, entitled Dunajská mozaika (Danube Mosaic).
This May, the Bratislava Boys’ Choir held concerts in Russia. And, as Skoček told The Slovak Spectator, at the Slovak Institute in Moscow a discussion with the film director Dušan Hanák and the screening of his films Obrazy starého sveta (Pictures of the Old World) and Ružové sny (Rose Tinted Dreams) took place. An event called Slovak Days in Russia was last organised in September 2004, and “it was certainly not the last event of its kind“, Skoček told The Slovak Spectator.
As far as Russian literature is concerned, Anton Eliáš, the Dean of the Faculty of Philosophy of Comenius University in Bratislava, told The Slovak Spectator that interest in Russian literature faded after 1989, and has started to re-appear only recently. Translations of the top Russian authors are now being published, including works by Tolstoy, Dostoyevsky and Bulgakov. But nevertheless, he considers this insufficient.

“If the pendulum [of people’s interests] has swung from one extreme to another, now it has begun to find a more balanced position,” Eliáš said.

According to Eliáš, evidence for this can be seen in the recent publication of the Dictionary of Russian Literature, of which he is a co-author. It comprises 550 entries on Russian writers from the 11th to 20th century, texts by anonymous authors (typically of medieval literature) and items focused on specific phenomena in Russian literary life from the period.

Lindovská added that in Slovakia in May, a show of current Russian drama called Focus Russia took place. Within this event, the work of contemporary Russian dramatists like Ola Muchina, Yevgeniy Grishkovetz, and Juriy Klavdiyev – whose one-person drama Me, Machine-gunner is currently enjoying great popularity in Russia – was presented.

Petra Šrámková contributed to this report