Unburdened by the past

IN the 1950s, the Communist government in Czechoslovakia banned English, as well as other languages of the "imperialists," and required every elementary school and high school student to learn Russian. 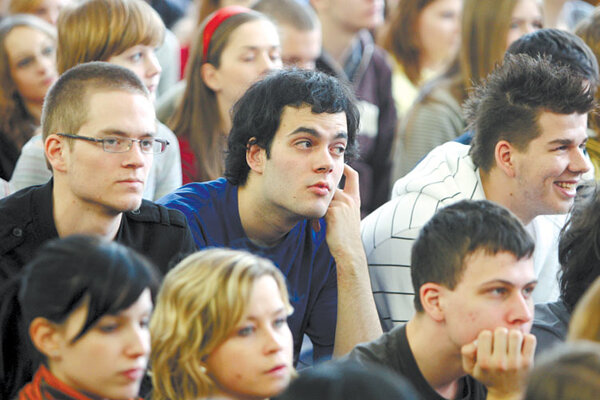 IN the 1950s, the Communist government in Czechoslovakia banned English, as well as other languages of the "imperialists," and required every elementary school and high school student to learn Russian.

So it's perhaps understandable that since the change in government in 1989, schools and students quickly adapted to the demands of globalisation, leaving only a small group that studies Russian as a specialisation.

However, Russia will always be of strategic importance to Slovakia, and many Slovaks are finding that knowledge of the language and culture makes them attractive to international corporations based here. So more and more Slovaks are brushing up on their Russian, and the generation unburdened by the past is learning the language for the first time.

Schools confirmed to The Slovak Spectator that interest in Russian has increased over the past few years. In fact, the demand is pushing it ahead of traditionally more popular languages, such as German, say language schools.

“This society still tends to reject Russian, but the generation that started going to school in 1990s looks at it differently,” said Katarína Gogová, head of the Russian department at 1.Štátna Jazyková Škola (1.ŠJŠ), the state language school.

"They did not experience Communism and they met other young people from the West who showed interest in Russia. And this changed their views."

The public's opinion of Russia has changed with developments in its foreign policy and expansion of its business activities, said Pavel Spišiak, principal of the private Súkromné Slovanské Gymnázium (SSG), in Bratislava.

“The experience of being forced to learn Russian has been forgotten. And the methodology for teaching Russian is now like that for other foreign languages."

Still, only a small number of people are learning Russian, so any increase is visible, he added.
About 50 people were enrolled in Russian courses at 1.ŠJŠ in the 1990s. That number is now more than 100.

The school has enough students for seven grades, which was never the case, Gogová said.

“About two years ago, more students than we could actually accept applied for Russian courses and last year we had to open an additional class of beginners,” she told The Slovak Spectator.

The students in the state language school are often employees of state and private institutions, companies, financial houses, as well as university students and new graduates from business schools.

“They are studying Russian as their second or third foreign language,” Gogová said. “There are also middle–aged people who learned Russian before, but want to go through it again to learn it properly.”

Gogová observed that many of the language students had decided to learn Russian or brush up on it because of the career opportunities.

“Foreign companies that have penetrated the Russian market are interested in people who speak the language,” she said. “Russian is not as easy as it seems, but we must admit that it is much easier for Slovaks, or people of Slavonic nationalities, than for, let’s say, Anglo-Saxon native speakers. And we should take advantage of this.”

Jana Kundratová from the Tandem language school, which includes Russian as one of the language it teaches at corporations, also agrees that there is a growing interest in Russian.

“Russian is worth learning for a lot of people because of the wide possibilities to use it and the large Russian market,” Kundratová said. “Russian is interesting as a second or third foreign language.”

And Spišiak from SSG said that the students at his school study Russian to attend Russian universities and have better chances finding a good job.

When it comes to universities, the interest in studying Russian differs according to specialisation, said Anton Eliáš, the dean of the Philosophy Faculty at Comenius University in
Bratislava.

There is the least interest in Russian among students studying to become teachers, he said.
Schools in Bratislava and western Slovakia still emphasise English and French, which occasionally puts Russian in third, he said.

Nonetheless, there are enough Russian teachers.

“Five faculties in Slovakia offer Russian as part of teachers' studies and it seems enough for this market,” Eliáš said.

There is is the most interest in becoming a Russian interpreter, especially in combination with English or German, he said.

Applicants to the programme must have passed a final exam in Russian at high school.
“These interpreters are very in demand,” he said.

In fact, they are perhaps the most attractive because they have knowledge of both cultures' economies and political developments, he added.

The third, and increasingly popular possibility, is to study Russian as a part of the East European studies programme at Comenius University.

“Interest in this programme is really exceptional,” Eliáš said.

Applicants can start learning Russian at the university because the study is more focused on history, culture, law, and business.

“It is clear that Russia still plays an important economic and political role in Europe and the world, and will probably continue to,” he said.