VISITORS entering the main exhibition hall of Danubiana, a modern gallery on the Danube, come across a large rectangular red box with "Made in the USSR" inscribed on it in Cyrillic letters. Red, which symbolises blood, revenge, the revolution, and Communism, is the predominant colour in the room. It's also the colour scheme in staged photographs by Arsen Savadov and a painting by Erik Bulatov, contemporary Russian artists whose work is currently on display as part of an exhibition on Russian art. 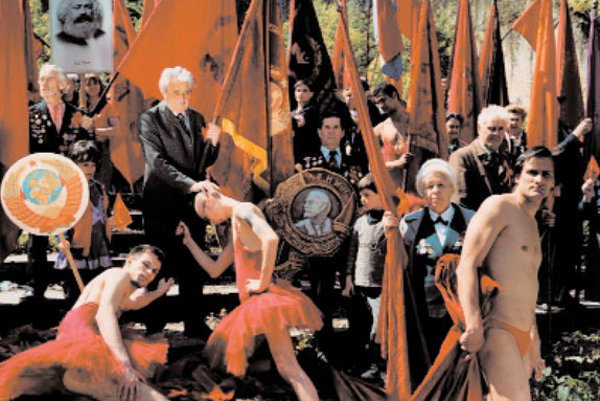 VISITORS entering the main exhibition hall of Danubiana, a modern gallery on the Danube, come across a large rectangular red box with "Made in the USSR" inscribed on it in Cyrillic letters.
Red, which symbolises blood, revenge, the revolution, and Communism, is the predominant colour in the room. It's also the colour scheme in staged photographs by Arsen Savadov and a painting by Erik Bulatov, contemporary Russian artists whose work is currently on display as part of an exhibition on Russian art.

“We wanted to have an exhibition about contemporary Russian art and its most prominent exponents,” Vincent Polakovič, the director of the Danubiana Meulensteen Art Museum, told The Slovak Spectator.

The exhibition is meant to fill in the information gap in contemporary Russian art that has occurred in Slovakia since the fall of Communism.

“Because the continuity, whether intended or not, was interrupted,” said Polakovič. “For the last 20 years, no exhibit like this has been held here. There were just small exhibitions, for example during the Month of Photography festival, so Slovaks have lost track of the Russian art scene.”
The idea of holding a comprehensive exhibition on Russian contemporary art dates back to 2002, when then–Russian Culture Minister Mikhail Svidkoj stopped at the Danubiana during an official visit to Slovakia.

The gallery, located on a peninsula on the Danube, so impressed him that he suggested the idea for the exhibition. At first it was taken just as a compliment, until it evolved into the current exhibition.

Jevgenij Berezner, who was then the vice-director of the Modern Art Museum in Moscow, was chosen to curate it.

The idea was to display works by three generations of artists, starting with some who were active during communism, then continuing into Soc-art, which emerged as a result of Gorbachev's perestroika, up to contemporary artists.

“Berezner brought in other curators – Irina Tchmyreva and Natalia Tarasova," Polakovič told The Slovak Spectator. “The three put together a colourful palette that serves as a window into the direction that Russian art is evolving.”

Such exhibits already exist in centres of contemporary art around the world, such as New York, Tokyo, and Rome.

“It is a huge success that this exhibition has arrived here,” Polakovič told The Slovak Spectator. “In particular, the communal apartment by Ilya Kabakov makes it an exceptional display,even on the world level. Because Kabakov is these days arguably Russia's most acclaimed artist.”

Kabakov is a conceptual artist of Russian-Jewish origin currently living in the United States.
His work at the Danubiana is an installation of pieces from communal apartments, which were part of a policy instituted in Russia after 1917, when Lenin took power, Polakovič said.

Large apartments and residences were divided into communal apartments, with a different family in each room. The kitchen, bathroom and hallway were always common.

“This is where people informed on each other," Polakovič observed. "Fathers against children, children against parents, one observed the others. Everything was infected by the regime. It was eerie.”

Some of the exhibited works are humorous. Others will make visitors ponder why Russian artists incorporated politics into their works by using the red of the Soviet flag.

“We should realise that Russia changed its name several times throughout the 20th century,” Polakovič said.

“First it was Russia, then the Soviet Union, then the Commonwealth of Independent States, etc. Borders changed, regimes changed and not only visual artists, but composers and writers as well, reacted to these change. And it is logical that Russians, being sensitive souls and extraordinarily patriotic, responded in such a way,” Polakovič said.

The exhibition includes works by 69 artists, most of whom have displayed at modern art biennales in Venice and Istanbul, as well as at Documenta, in Kassel. It is a colourful mixture of paintings, graphic works, installations, sculptures and photographs.

“Collective exhibitions, like this one on Russian art, and those on Hungarian and Austrian artists in the past, will never satisfy 100 percent of people,” Polakovič said. “But everybody will find something of interest here. It may inspire people to find out more on the internet."

One of the most popular pieces is a sculpture titled Lenin and Giacometti, by Leonid Sokolov. It is a life–like statuette of Lenin looking as though he's explaining realism to Alberto Giacometti's Walking Man, Polakovič said.

“People want their photos taken with it, ” he continued. “Sometimes a novella is more effective at making a point than a novel. This artist achieved that excellently.”

One of Polakovič's favorite pieces is a collection of photos by Boris Chmelov.

“He died in Russia in total obscurity,” Polakovič said. “Young curators discovered his work through images that were passed on to his family. This made them realise that Russia had a photographer of the calibre of Jan Sudek or František Drtikol.

“In the fall, his pictures will be displayed at a huge exhibition at the Hermitage Museum in St. Petersburg,” he added.

This is the largest and most comprehensive exhibition of contemporary Russian art ever presented in Central Europe.

“In the past, Slovaks had to travel far to see such exhibitions,” Polakovič said. “Now they have it at home. The fact that more than 1,000 people visited in the first week alone shows that there was a need for something like this.”