IT HAS BEEN an interesting week for Slovakia’s finance minister, Ján Počiatek. After being condemned by the prime minister he offered to resign, but the prime minister kept him on. Then he faced an attempt by opposition parties in parliament to get him sacked, but that too came to nothing. 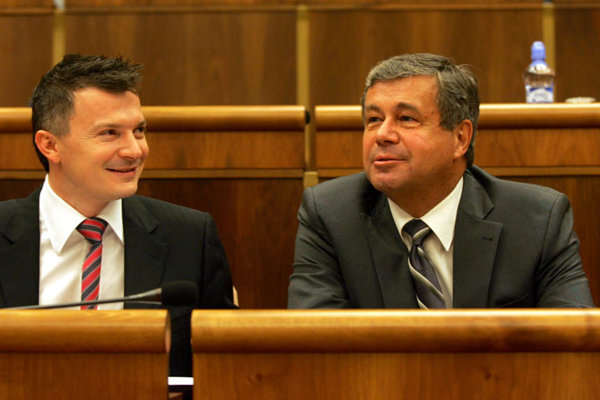 IT HAS BEEN an interesting week for Slovakia’s finance minister, Ján Počiatek. After being condemned by the prime minister he offered to resign, but the prime minister kept him on. Then he faced an attempt by opposition parties in parliament to get him sacked, but that too came to nothing.

Počiatek has been in the media spotlight since news emerged of his controversial Monaco meeting with the boss of a Slovak financial group, a meeting which Prime Minister Robert Fico described as “unethical” and “immoral” given his government’s proclaimed opposition to such firms.
In offering to resign, Počiatek suggested that he had done nothing illegal but that he would rather leave than see his party, Smer, damaged by the Monaco meeting. The prime minister declined his offer.

Fico said he is “fittingly angry” with his finance minister but after publicly criticising Počiatek’s conduct, he saw no reason to sack him.

“Why should someone ostentatiously show up on a yacht in Monaco?” Fico said on June 23, as quoted by the Sme daily. “I mind this ostentatious conduct. This is the whole problem.”
The opposition parties, led by the Slovak Democratic and Christian Union (SDKÚ) lunched a special parliamentary session to debate what they called Počiatek’s unethical conduct and a serious violation of political transparency.

However, the opposition did not have enough votes to oust the minister. (See adjacent story)
Minister Počiatek and the general director of Bratislava Airport, Karol Biermann, met Ivan Jakabovič, a partner in the J&T financial group, aboard Jakabovič’s yacht in Monte Carlo a few days before the European Central Bank revalued the crown's central parity on May 28, according to Plus Jeden Deň, the tabloid daily which broke the story.

In mid-June, the central bank looked into suspicions that there may have been a leak of information during the re-setting of the Slovak crown's so-called central parity rate against the euro in late May. The former finance minister, Ivan Mikloš, has suggested that a leak may have allowed some financial groups such as J&T to indulge in insider trading during the re-setting, reaping significant profits.

Mikloš said that the switch to the euro in Slovakia “already has its victors,” naming the financial groups J&T and Istrokapitál and saying that they had made hundreds of millions of crowns by buying the Slovak currency at the right time.

Central parity is the mid-point exchange rate between the euro and currencies hoping to adopt it which are governed by the European Exchange Rate Mechanism II (ERM II). ERM II rules mean that a currency’s exchange rate should not move more than 15 percent beyond the central parity rate without triggering central bank intervention. As the strengthening Slovak crown neared this limit in late May, Slovak officials including Počiatek wrote to the European Central Bank, requesting an adjustment in central parity. After this occurred on May 28, the crown strengthened further and groups, including J&T, which had earlier bought crowns in unusually high volumes cashed in.
Following the Monaco revelations, Fico sacked Biermann as chief of the state-owned airport. He has since been replaced by Zdeněk Schraml, who has previously served as chairman of the board of Bratislava Airport.

Meanwhile, J&T defended Počiatek saying there was nothing wrong with the finance minister visiting the J&T boss’s yacht. The joint chief executives of J&T, Patrik Tkáč and Ivan Jakabovič, rejected Fico’s take on the Monaco meeting.

“They are presenting us as vermin,” said Tkáč at a press conference organised by J&T to offer their version of the story. Tkáč and Jakabovič said that, following the reactions to the meeting with Počiatek, they expected a certain amount of “antipathy” to be targeted against the group.
“We will mind if we are disqualified from various projects that we would want to do for this society,” Jakabovič said, as quoted by Sme.

However, political ethics watchdogs said that the meeting between J&T and Počiatek should have happened across a negotiating table.

Zuzana Wienk of the watchdog Fair Play Alliance said that the finance minister met the financiers in a highly informal, personal situation, which created the impression of mutual closeness.
Wienk also said that Počiatek should have been suspended until the case had been thoroughly investigated.

“The circumstances of this meeting create a very strong suspicion which neither the government nor the minister can disspell, and which considerably harms their credibility,” Wienk told The Slovak Spectator.

According to Wienk, in developed countries ministers often resign for much more minor violations.
“In Slovakia politicians do not think ahead or think strategically and, through their unwillingness to take action, in fact end up digging their own grave and gradually undermining the credibility of not just their own party but the system as such,” said Wienk.

Though Počiatek denied any possibility of insider trading and Fico rejected the claims as mere unfounded speculation, the core of the problem for Wienk remains the fact that the minister created a situation in which one can hardly believe that he did not leak the information.

“His acts evoked a very serious suspicion, which remains hanging over the whole government as well as the prime minister’s party; moreover, it has created a situation where, in my opinion, the public will hardly believe that the case will ever get investigated,” Wienk said.

There is however, no standard or model of behaviour for contacts between the financial groups and the government, Wienk said.

For example, every country in the OECD group of industrialised nations has been trying to set standards, but many of them cannot really be turned into legislation and therefore exist only on an informal level, said Wienk.

“In any case, only the activities of public officials are regulated, while businessmen will always try to gain advantage, contacts or information and from their point of view the rules are much freer,” Wienk told The Slovak Spectator.

The standards exist first of all to make sure that public officials do not abuse their access to information or their position for their own benefit and to ensure that they act transparently and fairly represent the public interest, she said.

“I personally think that public officials should not develop informal relations with businesses and that they should preserve neutrality and distance,” Wienk said.