THE OPPOSITION knew that it did not have sufficient votes to oust Finance Minister Ján Počiatek, but it nevertheless forced a no-confidence vote in Parliament on June 25. Political analysts agreed that the debate served to expose weaknesses in the governing coalition, but said the long-term political consequences remain unclear. 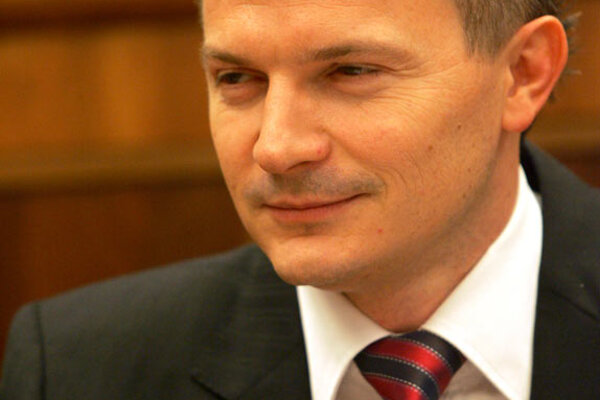 THE OPPOSITION knew that it did not have sufficient votes to oust Finance Minister Ján Počiatek, but it nevertheless forced a no-confidence vote in Parliament on June 25. Political analysts agreed that the debate served to expose weaknesses in the governing coalition, but said the long-term political consequences remain unclear.

In the end, 48 deputies voted to dismiss Počiatek, 55 were opposed, and one abstained. At least 76 votes would have been necessary to force him out. Počiatek’s survival in the parliamentary vote mirrors previous similar, failed ouster attempts by the opposition. Two other cabinet members, Labour Minister Viera Tomanová and Economy Minister Ľubomír Jahnátek, have also faced such votes.
Pavol Paška, the speaker of parliament and an MP for the governing coalition Smer party, tried to block the special session, unsuccessfully demanding that the opposition withdraw its proposal.
"It [this debate] will go down in Slovak parliamentary history due to the fact that there is no legitimate reason to hold it,“ he said.

Paška argued that exchange rate information had not been leaked – and said the governor of the National Bank of Slovakia, Ivan Šramko confirmed this information on June 24.

While Smer MPs voted against the opposition motion, deputies from its coalition partner, the Movement for a Democratic Slovakia (HZDS), were conspicuous by their absence. Only two members of the HZDS voted to back Počiatek: Tibor Cabaj and Beata Sániová voted against the no-confidence motion; another HZDS MP, Jozef Halecký, abstained.

Though Halecký told the Aktuálne.sk web portal that minister Počiatek still had the trust of the HZDS, he also added that the yacht visit should not have happened.

Ivan Mikloš, vice-chairman of the opposition SDKÚ, said the absence of almost the entire HZDS caucus at the vote was a clear political signal. According to him, HZDS deputies are reacting to what they see as double standards by Fico, whose retention of Počiatek, a Smer nominee, is in contrast to his earlier sacking of HZDS former agriculture minister Miroslav Jureňa, who was similarly mired in scandal.

Fico, who was visiting Germany, did not take part in the parliamentary session. According to the opposition, Fico simply avoided the discussion.

Mikuláš Dzurinda, the SDKÚ leader said Fico evidently wanted to avoid having to openly support his minister. He went on to say that it is also evident that Fico would not recall Počiatek, as the J&T financial group was against it.

Počiatek repeated in parliament that there had been no leak of information.

Interior Minister Robert Kaliňák (Smer) said the opposition had sought the ouster of Počiatek without any evidence. During the debate, Kaliňák produced a picture of Mikloš in a cycling outfit bearing the logos of several companies. This, according to Kaliňák, represented a conflict of interests.

Mikloš, who was finance minister during the previous government, pointed out that he was taking part in a cycling event at the time the photo was taken, during which he was required to wear the outfit.

According to Grigorij Mesežnikov, head of the Institute for Public Affairs, an independent think-tank, the Počiatek affair could weaken the ruling coalition.

"But to what extent only events to come will show,“ he told The Slovak Spectator.

"These were such contrived, unfair arguments that they served to demonstrate they had no real factual arguments,“ Mesežnikov said. He added that the case had not ended with the unsuccessful attempt to oust Počiatek. He said he did not rule out Počiatek’s subsequent resignation.
"If the situation becomes tense again, then there will be another moment of truth, though the minister has already survived once," he concluded.

Political analyst László Öllős agreed that the case would weaken the ruling coalition. But he said that it would not strengthen the current opposition either. Instead, it would just increase the number of citizens undecided about which political grouping to vote for. According to Öllős, the opposition’s problem is that during its time in power, between 1998 and 2006, several corruption cases occurred without anyone having to face the consequences, and the present government’s MPs will not stop pointing this out.

"Smer chose good tactics," Öllős told The Slovak Spectator. "On the one hand, it recalls old opposition cases, and on the other hand, it pretends to be more social.

“ Thanks to this, ordinary voters will think that all politicians have something to hide. According to Öllős, Smer voters say: "Politicians are not clean, but these ones at least give me something - while the former government did not."