PAVEL Bátorfi is not well. A patient of the Philippa Pinela Psychiatric hospital in Pezinok since June 5, he has been diagnosed with paranoid schizophrenia and a personality disorder. Behind the glass of men’s ward A, he talks and walks as if wading through water. In his pyjamas and slippers, he looks as if he belongs where he is. 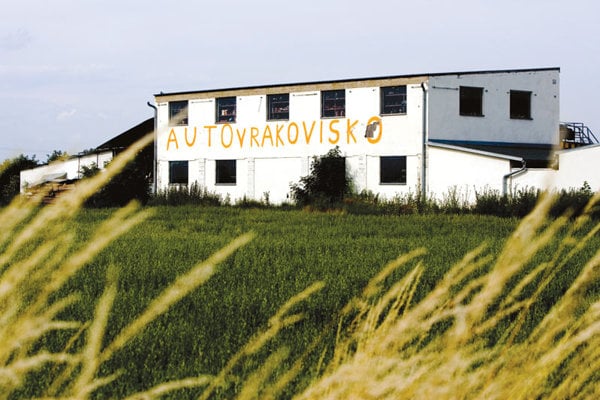 PAVEL Bátorfi is not well. A patient of the Philippa Pinela Psychiatric hospital in Pezinok since June 5, he has been diagnosed with paranoid schizophrenia and a personality disorder. Behind the glass of men’s ward A, he talks and walks as if wading through water. In his pyjamas and slippers, he looks as if he belongs where he is.

And yet, about two weeks before being committed, Bátorfi sold over 20,000 metres of agricultural land that he owned in Tomášov and Malinovo, a few kilometres from Bratislava, for Sk13 per square meter.

“That’s not real money,” said Laurie Farmer of international real estate office Spiller Farmer. “If someone offered me a chance to buy land in Senec district for Sk13 [per square metre], I’d be on his doorstep the next day with a suitcase of money.”

The buyers of Bátorfi’s land were Marek Lupták and Linda Luptáková of Bernolákovo. The couple owns the vehicle wrecking yard in the town and, according to Luptáková, befriended Bátorfi by chance two or three years ago.

Luptáková said that she and her husband had only been trying to help Bátorfi by buying his land. “He needed money, and we agreed that at any point he could buy it back from us,” she said. “We genuinely like him. We would never want to hurt him.”

However, Bátorfi’s wife Dagmar said that the Luptáks had taken advantage of her husband’s condition to gain access to his property. She has laid a criminal complaint in connection with the recent land deal, and fears that if the Luptáks manage to get her husband discharged from hospital, they will go after his remaining land.

“I’m just trying to protect his remaining property,” she said. “It’s our family treasure. I want to keep it for our children.” Under Slovak law, spouses have no claim to property that their partners inherit during their marriage.

The 10 hectares that still Bátorfi owns – at least for now – in Malinovo, Zálesie, Tomášov and Bernolákovo were inherited from his father. After the Second World War, Bátorfi Sr., an ethnic Slovak, traded his lands in Hungary with an ethnic Hungarian who owned property in Slovakia.
Dagmar Bátorfiová said that she and her husband had lived for years in a flat in Petržalka. “Sixteen years ago he had a head injury. He was a bus driver, so that meant he had to go on a disability pension. But even then we didn’t have problems – I went to work, and he took care of the household.”

Bátorfiová said that her husband had begun to act strangely two years ago, when he refused to visit the family’s garden and house in Bernolákovo. “He was very aggressive and agitated. In February 2007 he attacked me, and I laid charges against him. But I was afraid that the police would let him go, so I withdrew the charges. A month later he left and went to Bernolákovo to live, and I started getting threatening and insulting messages from his telephone.”

Bátorfiová said that in the summer of 2007, she had received a visit from Luptáková, who introduced herself as Bátorfi’s lover and claimed she was pregnant with his child. “She said I should get a divorce and move out of the flat, because she would be moving in,” Bátorfiová said. Luptáková admitted having visited the flat, but denied making any threats or claiming to be pregnant. “I’ve got a husband and a son,” she protested, standing up and indicating her stomach. “Do I look pregnant?”

Towards the end of last year, Bátorfiová, concerned by her husband’s erratic behaviour and the fact he was no longer taking his medication, applied to a court to have him declared mentally incompetent, with herself given power of attorney over his affairs. She is still waiting for a decision.

Bátorfi’s sister, Mária Fenešová of Bernolákovo, also discovered that unknown parties were trying to transfer his property into their names. They managed to have the land transfer proposal withdrawn in December 2007; the case is still being investigated by the police.

Finally, after not having heard from her husband in some time, Bátorfiová declared him missing on May 12. He was finally tracked down and escorted to the Pezinok mental hospital by a SWAT team from the local police station three weeks later, but during the intervening time had sold his property to the Luptáks.

The manner in which Bátorfi was hospitalised was highly unusual. His sister, Mária Fenešová, visited Viliam Klin, a Senec doctor, and obtained from him a diagnosis of her brother’s condition as well as a request for “a security detail to assist in hospitalising the patient because he is a danger to himself and his surroundings”. In his report on Bátorfi’s condition, Klin wrote that “the patient visited me in the company of his sister”, but later admitted in an interview with The Slovak Spectator that Bátorfi had not been present, and that he had never treated him.

“Sometimes it’s the only way, if the patient is wild and is threatening people around him,” he said.

Despite not having seen Bátorfi, Klin wrote a five-line diagnosis including observations such as “he answers only after repeated prompting and with a significant delay, and suffers from distortions in perception – acoustic and optical hallucinations”. He added that “he has a gun at home, and brought it to show off to his family, so they would be afraid of him”.

A few weeks later, Luptáková visited Dr. Klin, presenting herself as Bátorfi's step-daughter, and threatened to turn the case over to the media if Klin didn’t reverse his diagnosis. The doctor obliged her. “If his mental state permits it, I recommend that he be released from Pezinok. My recommendation that he be committed to Pezinok was written at the request of his sister.”

Klin told The Slovak Spectator that he had written the note for Luptáková because he had felt under pressure. “It was just a scrap of paper, it didn’t mean anything,” he said.

On June 19, this reporter paid a visit to Bátorfi in the Pezinok mental hospital in the company of Linda Luptáková and her young son. Luptáková was trying to prove how often she had visited Bátorfi, and what a close relationship she had with him.

“What’s Pali like?” she asked young Marek as we walked up the long drive to the men’s ward. “Nice,” came the answer.

By again passing herself off as Bátorfi’s step-daughter – “otherwise they wouldn’t let me have any contact with him” she explained with a shrug – she was allowed to pass Bátorfi a bottle of pop and a pack of coffee through the glass ward door.

But when she asked to be allowed to take Bátorfi out, a doctor was summoned, who quickly established that Luptáková had no family relationship to Bátorfi. The doctor also accused Luptáková of having taken Bátorfi out of the hospital grounds to his home in Bernolákovo on a previous visit. Luptáková maintained that she had only taken him to the nearby woods.

“At least don’t lie to me,” the doctor said. “Your visits are worsening his medical condition, so you will no longer have any visiting privileges.”

When she heard of the incident, Bátorfiová, who has not been allowed in to see her husband, was furious that Luptáková had had access to him. “I trusted the hospital to ensure that when they have a sick patient and I have explained the whole situation to them... I’m disappointed to discover that the person who is responsible for his current state had free access to the sick person, while I as his wife was not permitted to visit him.”

When asked to explain the situation, Dalibor Jánoška, the doctor in charge of the ward, refused to comment.

At the Luptáks’ junkyard, Bátorfi’s dog now barks from a cage. His five goats graze and cavort by the fence; young Marek has developed a taste for their milk.

The Luptáks have a letter of permission, signed by Bátorfi, giving them free access to his house and all of his land, 20,000 square metres of which is already theirs to dispose of as they wish.