THE GOVERNMENT may have easily defeated an opposition motion to have the finance minister sacked over suspicions of insider trading on June 25. But if it had been hoping that the vote would spell an end to the affair, messages from Brussels are now signalling otherwise. 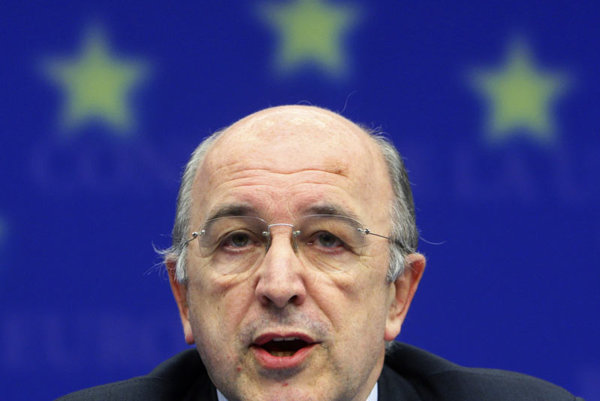 THE GOVERNMENT may have easily defeated an opposition motion to have the finance minister sacked over suspicions of insider trading on June 25. But if it had been hoping that the vote would spell an end to the affair, messages from Brussels are now signalling otherwise.

The European Commission is now calling on Slovakia to investigate properly whether any information was leaked during the re-setting of the Slovak crown's so-called central parity rate against the euro in late May.

“The question is that some ethical and legal provisions have not been respected”, the EU Monetary Affairs Commissioner, Joaquin Almunia, said in an interview with Bloomberg. The authorities should respond to this lack of respect for ethical and legal rules, Almunia added.

Last month, former finance minister Ivan Mikloš suggested that an information leak may have allowed some financial groups to buy Slovak crowns knowing that their value was very likely to increase, and hence reap significant profits.

The Slovak Finance Ministry attributed Almunia’s concerns to the activities of the opposition, specifically that of Mikloš’ party, the Slovak Democratic and Christian Union (SDKÚ), suggesting that they have been damaging Slovakia’s credibility.

Both Slovakia’s finance minister, Ján Počiatek, and his boss, Prime Minister Robert Fico, have been the subject of intense media scrutiny since Počiatek was revealed to have met the chief executive of financial group J&T on board a yacht in Monaco three days before the European Central Bank revalued the crown's central parity on May 28.

Mikloš declared that the switch to the euro in Slovakia “already has its victors”, naming J&T and another financial group, Istrokapitál, and saying that they had made hundreds of millions of crowns in profit.

Meanwhile, the European Commission confirmed that it would not take further actions because it is Slovakia’s job to investigate the suspicions.

Amelia Torres, press officer for the EU commissioner for Economic and Monetary Affairs told The Slovak Spectator that the suspicion of insider trading emerged in Slovakia and has involved the Slovak crown, therefore the investigation should be conducted by relevant bodies in Slovakia. The National Bank of Slovakia (NBS) has already been looking into the suspicions.

“The scrutiny still continues,” Jana Kováčová, an NBS spokeswoman, told The Slovak Spectator. “The central bank is currently working on a report and the bank’s intention is to produce the most in-depth report.”

As for the consequences Slovakia might have to bear if the suspicions of insider trading are confirmed, Torres said that at this point it is too early to answer such hypothetical questions.

“We should wait for the report that will be presented in September,” Torres said.

She also rejected speculation that the suspicions might affect the adoption of the euro in Slovakia.

“The investigation of the suspicion of insider trading is an entirely separate issue,” Torres said. “Slovakia has met the criteria to adopt the euro and it was approved by the Council of Ministers for the euro area while the European Parliament has also given a favourable opinion of whether Slovakia meets the criteria for adopting the euro.”

After news of Počiatek’s yacht visit emerged, Prime Minister Robert Fico described it as “immoral”, citing his government’s proclaimed opposition to financial firms. However, he refused to sack Počiatek, despite him offering his resignation.

The finance minister defended himself using the argument that he had misjudged the situation due to his lack of political experience. Počiatek also said that he has not violated any laws.

Meanwhile, Fico rejected allegations of insider trading and said that there had not been any harm done to the state.

“There has certainly been indirect harm and perhaps direct as well,” Mikloš said in an earlier interview with The Slovak Spectator. “After all, the exchange rate has an impact on the central bank’s finances. It may increase its losses, which sooner or later would have to be addressed. It seems the law was broken here. Someone may have passed along insider information.”

Central parity is the mid-point exchange rate between the euro and currencies hoping to adopt it which are governed by the European Exchange Rate Mechanism II (ERM II). ERM II rules mean that a currency’s exchange rate should not move more than 15 percent beyond the central parity rate without triggering central bank intervention.

As the strengthening Slovak crown neared this limit in late May, Slovak officials including Počiatek wrote to the European Central Bank, requesting an adjustment in central parity. After this occurred on the evening of May 28, the crown strengthened further and groups, including J&T, which had earlier bought crowns in unusually high volumes cashed in.

On May 28, the last day before the change in central parity, traders bought Slovak currency worth €740 million, an amount which was described as unusual even by governor of the National Bank of Slovakia Ivan Šramko, the Sme daily reported on June 28.