RARELY a day goes by that they are not somewhere in the headlines, buying up assets, selling off investments, or meeting with ministers on yachts. But just how much influence do Slovakia’s ‘financial groups’ really exert on the country’s politics and economy? 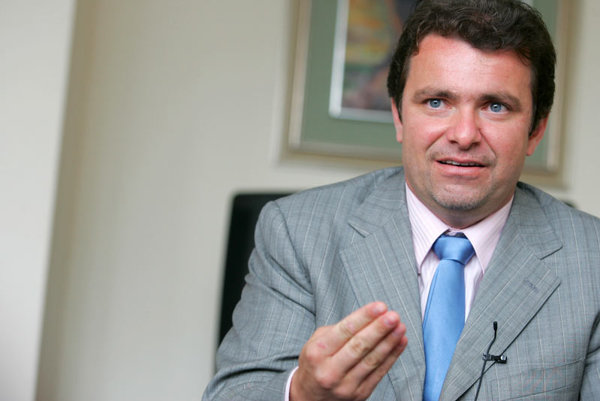 RARELY a day goes by that they are not somewhere in the headlines, buying up assets, selling off investments, or meeting with ministers on yachts. But just how much influence do Slovakia’s ‘financial groups’ really exert on the country’s politics and economy?

“These financial groups and multinational companies actually ran the [2002-2006] government of Mikuláš Dzurinda,” he said after elections in 2006, promising to distance his administration from capital groups like Penta, J&T and Istrokapitál. “We want to cut the bonds, even though we know we won’t be completely successful.”

However, as the recent presence of Fico’s finance minister, Ján Počiatek, on board a yacht owned by J&T suggests, two years of ‘social democracy’ have not hampered the country’s financial groups nor severed their ties with politicians.

“During the Fico government, we have worked our way into the No. 3 position on the Slovak real estate market, we have bought the largest meat processor in the country, and paradoxically we are continuing our activities in the health care sector through purchasing outpatient clinics and medical laboratories,” said Jaroslav Haščák, a founding partner with Penta Investments.

Penta, which won a tender for Bratislava and Košice airports under the previous government and became the biggest private investor in the health care sector, clashed early with Fico over these projects. But Haščák said the conflicts, while “a pity”, had not seriously affected Penta’s health. “We want to expand all of our activities in Slovakia and take them to the Central and Eastern European level,” he said in an interview with The Slovak Spectator.

J&T also continues to thrive under the Fico government. “The great majority of what we want to earn in Slovakia is yet to come,” said founding partner Patrik Tkáč, also in an interview with the newspaper.

And neither Haščák nor Tkáč saw anything wrong in contacts between financial groups and politicians. “Exactly the same thing happens in the Czech Republic, and in Moscow tenfold,” Tkáč said. “In France, President Sarkozy was seen on a yacht two days after his inauguration, and no one talked about his resignation.”

From their humble beginnings as stock brokerages in the early to mid-1990s, financial groups like Penta, J&T, Istrokapitál and Slávia Capital have grown and diversified into banking, real estate, health care, tourism, energy, engineering, meat, sport and media.

Today, the assets owned by Penta and J&T would put each of them among the top-10 largest non-financial companies in Slovakia as listed by the Trend business weekly. Penta, for example, claims to have over 20,000 employees working at companies it controls, a figure which would make it the largest employer in the country (the runner-up, Slovak Rail, listed only 18,000 in 2006). Penta’s consolidated revenues, at €900 million, also put it near the top of the list.

“They have a major influence on the economy because they control major assets, own a lot of factories and employ many people,” said Ivan Švejna, head of the F.A. Hajek Foundation, a liberal economic think-tank. “That in turn allows them to influence legislation.”

“There is no doubt that these are big firms”, agreed Trend reporter Gabriel Beer. “Their advantage is that they have been around a long time, and they have always communicated with politicians from all parties.”

At times, one or other group has seemed to be communicating more closely with a particular government. During the first Dzurinda government, from 1998 to 2002, Slávia Capital appeared to have the ear of ministers from the SDK party, and later drafted former Economy Minister Ľudovít Černák onto its supervisory board.

In the second Dzurinda government, two top advisors to Economy Minister Jirko Malchárek had previous business ties with Penta partners, while Malchárek nominated a third Penta associate to the supervisory board of the Bratislavská teplárenská energy company, which the financial group wanted to privatise.

Under the Fico government, the J&T group appears to have enjoyed the closer government ties, especially with the ruling Smer party. J&T partner Martin Fedor is the son-in-law of Deputy Environment Minister Dušan Muňko (Smer), while Robert Hančák of J&T Global was chosen to lead the economic department at the Interior Ministry under Robert Kaliňák (also Smer).

Both groups had ties to the 1994-1998 Mečiar government. Tkáč’s father Jozef was the head of the IRB state bank under Mečiar, a position his son Patrik described as “half political, half economic”. Vladimír Lexa Sr., the father of Mečiar’s secret service boss Ivan Lexa, acted as an unofficial consultant to Penta, and recommended that the group hire Alojz Lorenc, the former head of the ŠtB communist secret service. Istrokapitál, meanwhile, later hired men who had spent time in custody as suspects in the kidnapping of Michal Kováč Jr. in 1995, a crime believed to have been orchestrated by Mečiar’s secret service.

But both J&T and Penta claim that these apparent ties have neither helped nor hurt them. “The familial relationship between Martin Fedor and the deputy environment minister never brought J&T any advantages,” said the group’s spokesman, Maroš Sýkora. “On the contrary, the government of which Dušan Muňko is a member halted about Sk30 billion worth or privatisation projects in which J&T had already won tenders.”

Haščák also said that there was nothing personal in Fico’s attacks on his group. “It’s a value conflict. He [Fico] honestly believes that the state is a better manager or owner than the private sector,” he said. “It was only a coincidence that we were involved in a conflict [with Fico]. We bought the airport right after the elections, and he sensed an opportunity to reverse the transaction and gain some political points. Even if J&T had been behind the deal, the airport tender still would have been scrapped just the same.”

Whatever the truth, Fico remains intensely aware of the public’s misgivings regarding financial groups, and of the dangers of appearing beholden to them.

“If on the one hand we claim that we are fighting against financial groups, and on the other hand the minister of finance makes public appearances in their company, it looks bad,” he said, following Počiatek’s recent faux pas. “I like financial groups just about as much as a goat likes the knife.”

“Rhetoric is one thing and reality another,” said Švejna. “These groups still have enormous influence.”

Haščák agreed that the fuzzy ties between the state and financial groups hurt the images of both. “They aren’t transparent, that’s true. It’s a problem. But again it’s a problem caused by the state. There will always be lobbying, but the point is that I make the most money not by managing to get a piece of property for a hundred million crowns cheaper, but when conditions are created for me to succeed.”

Tkáč also saw public perception as a problem, and said his company had yet to figure out how to earn money and protect its reputation.

“Every sale of state property is controversial in one way or another. But when people read every day about our buying something or taking something over, they start to believe that it can’t be on the up-and-up. So far, we haven’t found many ways of addressing this feeling.”