Cultural boom in the east

KOŠICE and Prešov are proving that rivalry and solidarity are not mutually exclusive. 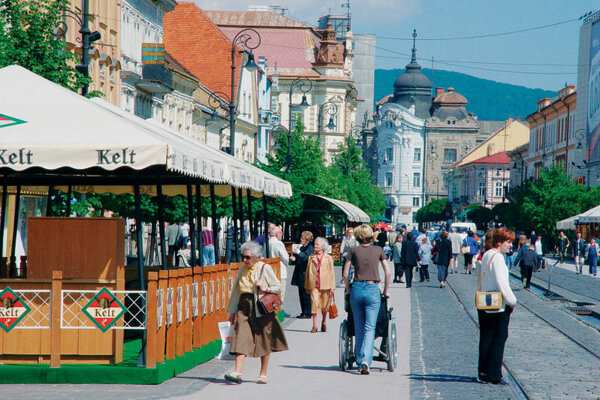 KOŠICE and Prešov are proving that rivalry and solidarity are not mutually exclusive.

Along with Martin and Nitra, the two eastern Slovak metropolises have advanced to the second round of the competition for the European Capital of Culture (ECOC) 2013. As well as a Slovak town, there will be another ECOC chosen in 2013 from among four French cities – Bordeaux, Lyon, Marseille and Toulouse.

By July 11, all Slovak candidate cities must submit their final candidacy profiles, which will be presented to an international jury on September 8 and 9. According to their representatives, despite having much in common, all the projects are quite different in their approaches.

“For instance, our concept, ‘the Forgotten Jewel,’ consists of four pillars that focus on such issues as professional and amateur art, social cohesion, intercultural dialogue, culture as a commercial product, and environmental or leisure activities,” said Anna Mišinová, PR manager for the Prešov 2013 project. “In each of these domains, different treasures of our town and the surrounding area will be discovered and rendered more accessible.”

Apart from organising cultural events, workshops and conferences, Prešov aims to make such towns as Bardejov, Kežmarok, Levoča and Sabinov more attractive to tourists. Another project will be the renovation of an old natural amphitheatre near Prešov that has not been used for more than a decade.

Mišinová added that Prešov’s candidacy is exceptional because of the extent of the area.
“Prešov’s candidacy for the ECOC is supported by the entire Prešov Region,” she told The Slovak Spectator. “Looked at objectively, and compared with other candidates, this partnership represents the most promising potential from the cultural, historical, religious and natural points of view. After all, we are supported by the entire region – from the Tatras all the way up to Medzilaborce [the home of the Andy Warhol Museum].”

On the other hand, Michal Hladký, the author of the Košice 2013 project, expressed his belief that Košice has the greatest chance of winning.

“Our project is inspired by computer terminology and is called InterFace,” he told The Slovak Spectator. “The whole city will be an interface through which citizens, or users, can take advantage of cultural programmes and software.

The grant which we hope to obtain if we win will serve as a tool to enable all this to become reality. The InterFace concept is an approach, a manner of thinking, a framework through which we try to view every aspect of culture in our city. In my opinion, this is the best way to approach such issues. Košice’s concept is the most realistic.”

In the Košice 2013 project, a former army barracks situated in the city centre will play the major role as a “base” for alternative culture and underground artists. Košice also plans to renovate an old indoor swimming pool that will serve as an “artness and wellness” centre and to make the abandoned Bankov mine accessible for artists. As with other candidate cities, both one-time and recurring cultural events will be organised if Košice wins the competition.

Although the plans of these cities may seem ambitious and, of course, costly, they are grounded in real possibility as the winner of the competition will receive millions of euros in European Union funds to improve and revive its cultural scene. Prešov and Košice have agreed to share the support if one of them wins.

“Slovaks are known for their friendliness and hospitality,” stated Mišinová. “As part of the Prešov 2013 project, we have even created a mascot called Eurofriend that symbolises our openness towards the other candidate cities. Furthermore, we have signed a memorandum with Košice, in which we promise to co-operate with each other no matter which city wins.”

“Košice and Prešov are very close to each other both geographically and mentally,” she told The Slovak Spectator. “That is why Prešov’s possible victory will be our victory as well, and vice versa.”

Competing for the same title as the Slovak cities, links among France and Slovakia have recently become very numerous.

“From the very beginning of our candidacy, we have co-operated with all French candidate cities,” said Vachnová. “From exchanging our experiences in the creation of projects to organising specific cultural events, these French towns have been and will be our partners, regardless of which of them wins.”

According to Vachnová, communication with their French partners has been extremely friendly and smooth even though the two nations have rather diverse characteristics.

“At the beginning, we thought that it would be difficult to find common topics,” she told The Slovak Spectator. “Admittedly, we sometimes view issues in different lights, but in general, we found that we have much in common. Sometimes it is quite surprising how much we understand each other. And this is true on the linguistic level as well – the usual stereotype that French speak only French is false. Many of them also speak English.”