IT IS THE cause of concerns and high hopes for any country aspiring to enter the eurozone. But Slovakia now knows the most important number: the final conversion rate. Finance ministers of the European Union member countries set the conversion rate at Sk30.126 per euro, while Slovak state officials greeted the move as a historic success for the country. 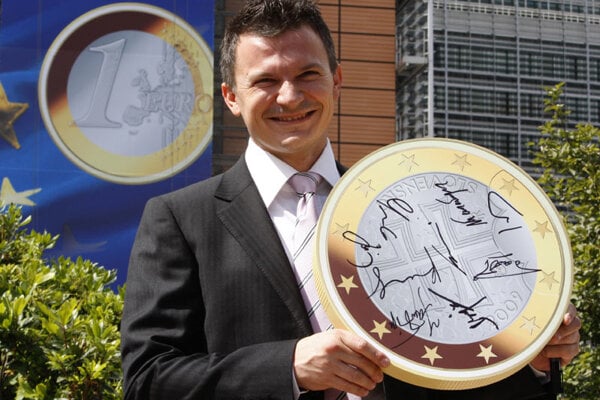 Ján Počiatek as finance minister in 2008, posing with a mock-up of a Slovak euro coin in Brussels after the final crown–euro conversion rate was confirmed. (Source: Reuters)
Font size:A-|A+

IT IS THE cause of concerns and high hopes for any country aspiring to enter the eurozone. But Slovakia now knows the most important number: the final conversion rate.
Finance ministers of the European Union member countries set the conversion rate at Sk30.126 per euro, while Slovak state officials greeted the move as a historic success for the country.

The Economic and Financial Council of the European Union (ECOFIN) gave Slovakia the long anticipated number at its July 8 meeting in Brussels.

It matches the Slovak crown’s current central parity rate within the European Exchange Rate Mechanism II, the system which currencies enter prior to euro membership.

The central parity rate was reset on May 28 in response to the crown's appreciating value.
“This is a major success for Slovakia, the result of determined policies to promote convergence over recent years,” said Joaquín Almunia, European Commissioner for Economic and Monetary Affairs, in an official European Commission release.

Almunia noted that Slovakia will join the euro area exactly ten years after the currency's inception, and dubbed the single currency, which is now shared by some 325 million citizens, a remarkable success.

“Slovakia is well-placed to benefit from euro-area participation,” said Almunia, adding that the country has not reached the end of the road yet. “Slovakia needs to remain committed to sound policies, particularly in the fiscal and structural domain.”

The European Commission proposed ECOFIN give the go-ahead to Slovakia in May, after it had found that the country met the convergence criteria.

The European Commission said that membership in the Economic and Monetary Union offers Slovakia huge benefits, such as “thorough integration into a stability-oriented policy framework, enhanced cross-border trade and investment, better access to integrated financial markets, and greater price transparency and competition.”

Though Slovakia’s finance minister, Ján Počiatek, admitted that the government had hoped to have the conversion rate rounded to Sk30.00 per euro, state officials said that the country receives the number with satisfaction.

“This is a historic success for the people and the conversion rate does not threaten the business sector either,” Počiatek said after the ECOFIN meeting, as quoted by the SITA newswire .

The conversion rate respects the recent development of the country’s economy and sets the ground for further economic growth as well as taming inflationary pressures in the medium term Ivan Šramko, the governor of the National Bank of Slovakia (NBS), said.

The cabinet proxy for the euro, Igor Barát, said that none of the phases Slovakia has been through were doubted by the European institutions.

“It is a huge success by the government, the central bank and the whole country,” Barát told The Slovak Spectator. “None of the steps were accompanied by problems as the European institutions gradually evaluated us as a potential candidate for the eurozone, and no one has officially questioned any phase of the process.”

The European Commission and the European Central Bank had twice accepted Slovakia's request for a change in the central parity, something which no other country has succeeded before, Barát noted.

“The conversion rate now set is a great success as well, considering the strong level that the country managed to negotiate,” Barát added.


Could have been stronger?

Prime Minister Robert Fico, who has been calling for the strongest possible conversion rate, said on July 8 that the conversion rate is entirely optimal from the point of view of the Slovak government.

“On one hand it benefits the savings and incomes of people and on the other hand it does not threaten the country’s economic growth,” Fico told the press. “It is a success that will bring further success.”

Neither Fico nor other state officials credited the former government for the achieved success.

However, a deputy for the opposition Slovak Democratic and Christian Union (SDKÚ), Ivan Štefanec, told the Sme daily that the process that resulted in the setting of the conversion rate was begun by the former government of SDKÚ party leader Mikuláš Dzurinda.

Štefanec also suggested that the conversion rate could have been even stronger if Slovakia had avoided what he called the “mega-scandal” around suspected insider trading around the time when the central parity of the Slovak crown was revalued on May 28.

Fico rejected Štefanec’s words as ungrounded and said that they only reflect the despair of the opposition.

The European Commission in early July called on Slovakia to investigate properly whether any information was leaked during the re-setting of the rate in late May.

Last month, former finance minister Ivan Mikloš suggested that an information leak may have allowed some financial groups to buy Slovak crowns knowing that their value was very likely to increase, and hence reap significant profits. Počiatek was revealed to have met the chief executive of financial group J&T on board a yacht in Monaco three days before the European Central Bank revalued the crown's central parity. A major report on the suspicions by the National Bank of Slovakia is due in September.

Like previous euro-area entrants, Slovakia will have to pay close attention to the practical preparations needed in the next five-and-half months to secure a smooth changeover, said the EC.

“The dual display of prices will start now, while the information campaign will enter a new, more intense, stage and will culminate by the end of the year” Barát told the Slovak Spectator. “The minting of Slovak euro coins will start, along with their distribution to banks. Euro banknotes will be brought in from Austria and distributed, while the distribution and sale of euro starter packs will begin as well.”

According to Barát, all of this, along with completion of the necessary legislation, and the testing of information systems, should happen by the end of the year.

After January 1, 2009 there will be a 16-day period of dual cash circulation, then the withdrawal of the Slovak currency from circulation and its liquidation, and the exchange of Slovak crowns for euro in the banks, said Barát.

“After that the information campaign will gradually fade,” Barát said.

Barát says the information campaign is successfully meeting its goals.

In June, 70 percent of the respondents said they felt well or quite well informed about the euro, compared to only 38 percent in May, according to Barát. He said that the support of the public for euro adoption has been increasing as well.