A LOWER speed limit in towns, headlights on at all times, higher penalties for drivers who break the law, compulsory reflective clothing for cyclists and pedestrians outside towns: all these are part of Slovakia’s new traffic code. According to the Interior Ministry, the new measures are to increase road safety, improve driver discipline and cut the number of accidents and casualties on the road. 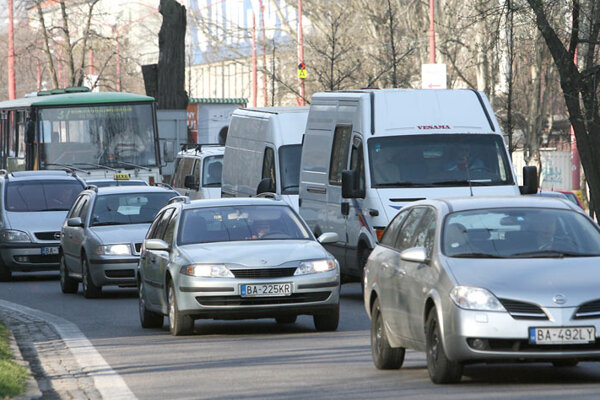 Drivers will have to keep their headlights on all year starting in October. (Source: Sme - Pavol Funtál)
Font size:A-|A+

A LOWER speed limit in towns, headlights on at all times, higher penalties for drivers who break the law, compulsory reflective clothing for cyclists and pedestrians outside towns: all these are part of Slovakia’s new traffic code. According to the Interior Ministry, the new measures are to increase road safety, improve driver discipline and cut the number of accidents and casualties on the road.

The European Commission says it wants to halve number of fatal casualties on EU roads by 2010, compared to 2001. According to a recent survey of the European Union, Slovakia has the eighth most dangerous roads in the union, based on the number of fatal car accidents per 100,000 inhabitants. Survey says the most frequent reasons for road accidents in Slovakia are arrogant and aggressive driving, drivers’ inexperience, and the bad state of the roads.

“The police expect [based on the new code] to eliminate those traffic participants, mainly motor vehicles drivers, who severely and repeatedly contravene traffic safety and thereby threaten other traffic participants,” Viktor Plézel, a police spokesman, told The Slovak Spectator.
The Slovak parliament adopted the new code on July 3; the new measures will take effect on October 1.

“We see benefits from all the measures of the new code,” said Plézel.

The police are placing most of their hopes on the new requirement to drive with illuminated headlights year-round, the lower urban speed limit, and enhanced police powers to test drivers’ qualifications, as well as their medical and psychological fitness to drive. The definition of a set of particularly serious infringements, which will qualify for even stricter penalties, will also be an effective tool, said Plézel.

The current state of traffic, its increase, intensity and effect on safety has been alarming, said Ľubomír Palčák, general director of the Transport Research Institute in Žilina. Changes to traffic laws were inevitable and the adoption of a new code was an even better solution, he added.

“The code includes all the most important measures from among those which have been proven in countries with more developed road safety than ours,” Palčák told The Slovak Spectator.

The new code also prohibits using a telephone while driving and sets tighter penalties for driving under the influence of alcohol. Walkers are also banned from using a phone or a music player when crossing or walking along a road.

The penalty for driving under the influence of alcohol is set at Sk7,000 to Sk30,000 and can result in a driving ban of up to five years. If a driver refuses to undergo an alcohol test he can be fined Sk10,000 to Sk40,000 and banned from driving for between one and five years. For drinking alcohol while driving, or causing an accident or exceeding the speed limit, the penalty is set at Sk5,000 to Sk25,000 along with a ban on driving for three years.

Parking on pavements will not be completely banned, as was originally proposed. Drivers can still park on pavements but must leave at least 1.5 metres of space for pedestrians.

Truck and bus drivers, as well as drivers who frequently infringe traffic code rules, will have to pass psychological tests.

Drivers who are fined more that Sk2,000 will be able to pay their fine by doing community service. One hour of work will pay off Sk100 of their penalty.

Palčák considers the decrease in the urban speed limit as one of the most important measures which could contribute to road safety. By cutting the limit by 10kph, the breaking distance decreases by 9 metres. The chance of a pedestrian surviving thus increases by 40 percent.

“Studies suggest that following the adoption of this measure, and checking the limit regularly, the number of severe accidents drops by 10 percent,” Palčák said.

He sees a similar benefit in year-round headlight illumination. So far, this measure has been introduced in 14 EU countries and there are moves in the European Commission for it to be made compulsory union-wide by means of an EU directive.

“Studies which we had a chance to see, whether by the World Health Organization or from Holland, confirmed the positive impact of this measure on traffic safety,” he said. “The percentage by which the number of severe car accidents decreased was around 6 to 13 percent.”

Palčák believes that arguments against this measure - such as the resulting increase in CO2 emissions, or the possible negative impact in some very specific situations - are largely in the minority when compared to the benefits it brings.

However, in case of winter tyres, he would have preferred a fixed date to have been set for their compulsory usage. MPs defended the new rule by saying that compulsory winter tyres would have burdened poorer citizens.

Winter tyres have a positive effect on traffic safety not only in the case of snow and ice but also in low temperatures, Palčák added. “The new code allows great ambiguity in this and it could mean difficulties when investigating severe car accidents,” he said.

Palčák is also doubtful about enforcing the new rule banning walkers from using a phone or listening to music when crossing a road.

The association of road transport operators, Česmad, welcomed the news that a proposed ban on vehicles over 7.5 tonnes being driven on Fridays between 16:00 and 20:00 did not make it into the code.

“As a compromise between our association and the Interior Ministry, a ban on overtaking for trucks on dual carriageways was approved,” said Pavol Reich, general secretary of Česmad.

Given the increased minimum speed limit on highways, Česmad does not expect the overtaking ban for trucks to be a problem. On the contrary, it expects the measure will increase traffic fluency and safety.

However, insurance companies said the new code might cause problems when determining responsibility for accidents. Currently, those involved in accidents are obliged to call the police if the damage exceeds ten times the minimum monthly salary (i.e. about Sk80,000 at present incomes). The new code lifts the damage limit to Sk120,000.

“Even now, not calling the police to a car accident means that there is a risk that there will be no agreement on the cause of the accident,” Lucia Muthová, spokeswoman of Allianz–Slovenská Poisťovňa, told The Slovak Spectator. “By increasing the limit … this risk, of course, increases.”

Transport professionals agree that the new code was needed in response to the increase in traffic. However, much will depend on the attitude of the police and Interior Ministry as to whether its adoption will be successful and bring positive results on Slovak roads, they
added.

“Let it not be a tool for enforcing penalties but really for prevention, so that the authority of the police will increase in Slovakia,” Palčák told The Slovak Spectator.
Over the last five years the number of road accidents in Slovakia has been stable, according to the Slovak Police.

However, in terms of fatal casualties the situation is improving, despite a slight increase in 2007, said Plézel. For the first six month of 2008, 76 fewer people died in road accidents compared to the same period in 2007.