THE MARKET and its observers absorbed some of the most anticipated news of the year with almost stoic calm: the Slovak crown will be converted into euros at the rate of Sk30.126 per euro on January 1, 2009, when the country abandons its old currency and switches to the European single currency. 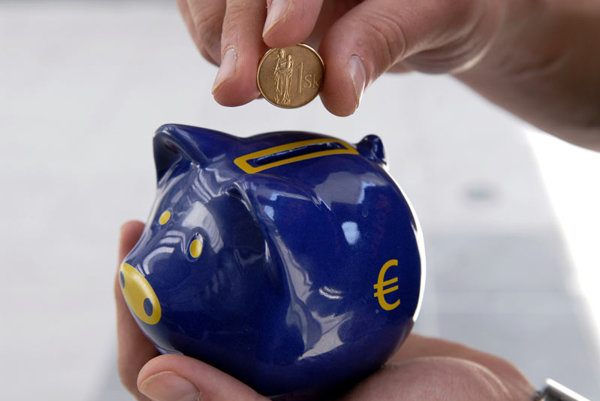 Slovaks now know how many euros they will get for their crowns in January. (Source: ČTK)
Font size:A-|A+  Comments disabled

THE MARKET and its observers absorbed some of the most anticipated news of the year with almost stoic calm: the Slovak crown will be converted into euros at the rate of Sk30.126 per euro on January 1, 2009, when the country abandons its old currency and switches to the European single currency.

While the market had expected the conversion rate to be set at around the crown's central parity, which was reset within the European Exchange Rate Mechanism II on May 28 to stand at Sk30.1260/€, some investors had hoped for a stronger rate. These hopes had been raised by statements from politicians calling for the strongest possible exchange rate. Still, both the central bank and state officials welcomed the final crown-euro conversion rate enthusiastically, saying the rate would help tame inflation pressures in the medium term.

Market watchers said that the path Slovakia has taken towards the euro is unprecedented.


“Slovakia in fact delivered unprecedented evidence that a strongly and healthily growing economy together with a robustly strengthening currency could be a successful candidate for euro adoption,” chief analyst at the UniCredit Bank Viliam Pätoprstý told The Slovak Spectator.


However, analysts also said that the appreciation of the currency and the final crown-euro exchange rate had been anticipated for the past couple of months.

“Most of the market had expected the new parity to become the exchange rate, so the reactions of the markets, which were after all neutral, reflected that development,” said Pätoprstý.


Martin Lenko, senior analyst with the VÚB Bank said he had not noticed any turbulence on the market either and agreed that setting the final conversion rate at the central parity was the “most probable scenario on the market”.

Though, the market had anticipated the final conversion rate, there were investors who had bid at a stronger exchange rate. Since there hopes were not realised, the exchange rate of the crown weakened very mildly, Juraj Valachy of Tatrabanka told The Slovak Spectator.


Silvia Čechovičová, macro-economic analyst with the ČSOB Bank, confirmed that the weakening was insignificant and that the rate in fact oscillated within a very narrow band: Sk30.22 to Sk30.28 per euro.

Pätoprstý assumes that the exchange rate will mostly be at levels between Sk30,126 and Sk30,300 per euro.

According to Čechovičová, the Slovak currency will continue being influenced by supply and demand in the market.

“In general, the exchange rate will oscillate around the set conversion rate plus the forward points calculated from the differences in the exchange rates, which are currently around 11-13 hellers but change according to the situation in the market,” Čechovičová said. “Rates in the eurozone money market, despite the key interest rates of the European Central Bank and the NBS being the same, are higher due to the liquidity crisis.”

As the date for Slovakia to join the European Monetary Union nears, the spot rate will gradually approach the set conversion rate, Čechovičová added.

Who gains and who pays?

In general, analysts agree that the final exchange rate will not create major tensions in the economy and will help to fight inflation.

“The level at which the conversion rate was set is close to the optimal conversion rate, which is the assumed equilibrium during the first half of 2009,” Pätoprstý told The Slovak Spectator. “Such a level is good not only for pushing down inflation but is also fair for the population.”

The strong exchange rate should push down prices of imported goods such as cars and electronic appliances, though prices for these products already reflect recent developments.

From the point of view of importers, the exchange rate is certainly advantageous, bringing them partial exchange-rate gains, just as it is for consumers, who in such a competitive environment of sellers can benefit from cheaper imported goods, said Lenko.

“Exporters are standing on the other side and it would be difficult to find much enthusiasm among them over the development,” said Lenko. “An excessively strong exchange rate will bring the risk of considerable worsening in the financial situation of exporters, which might lead to bankruptcy and layoffs.”

According to Lenko, the first problems have already emerged, for example in the case of the company Slovglas, which listed as the main reason for its bankruptcy the strong conversion rate. Back in 2005, Whirlpool used this argument when it reduced the number of its employees.


“Slovglas might not be the last company to face problems caused by the fast strengthening of the Slovak currency.

The path to the euro

The path the Slovak currency has taken proves that European Commission bodies were flexible when considering the specifics of the applicant country, such as a floating exchange rate and fast economic growth, Valachy said.

Among those factors which have had the most decisive effects on the Slovak currency on its way to the euro, Lenko listed the considerably faster growth of the economy or, more precisely, the fact that labour productivity grew faster than in other European Monetary Union countries.

As for other effects on the exchange rate of the Slovak crown within the ERM II, Lenko said these were the parliamentary elections in June 2006.

“Between April and June 2006 the crown weakened due to concerns that the new, socially oriented government would not have the will to keep the public finance deficit under 3 percent, which would have made the adoption of the euro impossible,” said Lenko.

In the second half of 2007 and early 2008, it was mainly the aversion towards the risks posed by the mortgage crisis in the United States and the subsequent credit crunch which influenced the Slovak crown, which during the period successively weakened and rallyed in a band between Sk32.7 – Sk34.3 per euro.

“I regard recent development, specifically the strengthening of the crown by 5.24 percent from early May until May 28, 2008, as a phenomenon based merely on speculation pertaining to the second revaluation of the parity and the future fixed rate, where the future development of the economy was considered,” Lenko told The Slovak Spectator. “The new parity at Sk30.126 indicated that the conversion rate would probably be set at a stronger level than the current state of the economy suggested; obviously inspired by efforts to keep inflation under control in future.”

The Slovak crown since its entry to the ERM II system has strengthened by almost 22 percent, said Čechovičová.