They will return home

IF THE GOVERNMENT creates favourable conditions for doing business in Slovakia, and there are interesting employment opportunities here, Slovaks living and working abroad will return home even without special state campaigns: so says the executive director of the American Chamber of Commerce in Slovakia, Jake Slegers. 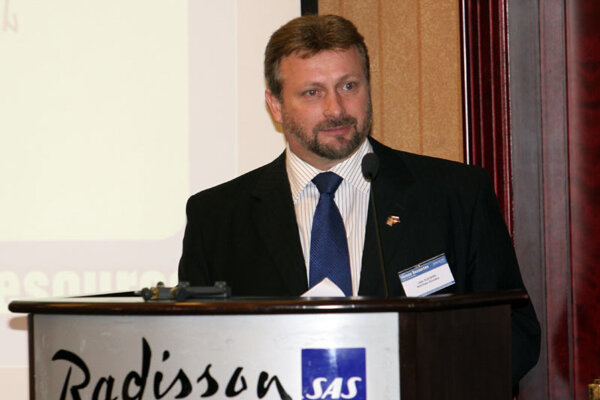 IF THE GOVERNMENT creates favourable conditions for doing business in Slovakia, and there are interesting employment opportunities here, Slovaks living and working abroad will return home even without special state campaigns: so says the executive director of the American Chamber of Commerce in Slovakia, Jake Slegers.

He also believes that Slovakia has a continuing appeal to investors even though some manufacturers might opt for alternative destinations with lower labour costs. “Slovakia seems to be increasingly appealing to investors in the IT, telecommunications and shared-services sectors,” Slegers said, in an interview with The Slovak Spectator.

The Slovak Spectator (TSS): What impact has Slovakia’s entry to Schengen had on relations, and specifically business ties, between Slovakia and the United States? How, in your opinion, will Slovakia’s adoption of the euro affect business dynamics between the two countries?

Jake Slegers (JS): In order to meet the strict criteria of the Schengen acquis, Slovakia had to significantly upgrade its security system. The efficient implementation of the Schengen security measures at the external borders and inside the area is preventing illegal migration and other types of cross-border crime, making Slovakia a safer country for the benefit of Slovaks, as well as other EU citizens.

In addition, the higher level of security brings Slovakia much closer to a visa-free travel regime with the United States. And the convergence in security measures also has positive spillovers for business ties between the two countries.

Due to Slovakia’s eurozone entry and the related currency stability, the attractiveness of the country as an investment destination will definitely increase, especially when compared to other neighbouring countries.

On July 8, shortly after the announcement about the conversion rate, the Fitch rating agency increased Slovakia’s standing. Naturally, the higher level of stability and lower level of financial crisis risk contribute to a better investment environment.

TSS: As far as the structure of trade between Slovakia and the United States is concerned, where do you see the greatest potential for Slovak exporters? Do Slovak exporters meet security and qualitative standards set by US importers? In which areas does Slovakia still lag behind?

JS: At present, three quarters of Slovak exports to the US are motor vehicles and machinery – rather capital-intensive products. But there is great potential also in other areas that are the domain of small and medium sized enterprises. As we learned from Mr. Philip Byrd, General Director of the American Importers Association, who visited Slovakia earlier this year, there is still untapped potential in products such as giftware, home textiles, regional food, bottled water and soft drinks, as well as white wine and crystal.

Thanks to EU membership, Slovak exporters generally do not have problems meeting the strict security and qualitative standards set by US importers. However, most American importers do not know what Slovakia has to offer.

Therefore, marketing is an area where Slovak exporters should improve. A smart marketing strategy is instrumental in achieving success in the US market. Even though marketing can be expensive, there are relatively cheap ways of effectively reaching US importers, for instance, by maintaining an attractive website or by participation in American trade shows.

TSS: Are US companies and investors still interested in business in Slovakia? Which are the areas that could potentially attract further US investments?

JS: Slovakia is definitely still a very attractive place for US investors; however, we are beginning to see the closing of a few factories of US origin and their move to other countries.

Understandably, the interest of some manufacturers and other companies coming to Slovakia mainly because of the lower labour costs is decreasing. On the other hand, Slovakia seems to be increasingly appealing to investors in the IT, telecommunications and shared-services sectors.

Offshoring to Central and Eastern Europe in particular is booming. We have witnessed the
gradual transformation of many companies who invested in Slovakia in the past few years, from the transaction centre for Western Europe into a knowledge hub and eventually into corporate/regional headquarters.

Quoting Veit Dengler, CEO of DELL, we can capture this trend in one sentence: “Came for cost, stayed for quality”. Given Slovakia’s strengths, such as a talented workforce with good functional knowledge and language capabilities as well as the cultural proximity and accessibility, the prospects in the area of ICT and shared-services centres are very optimistic also for the years to come.

After all, it will be always appealing to US investors that there are more than 200 million potential EU customers within a 1,000-km radius of Bratislava.

TSS: Both the previous and current governments here have declared their intention to progress towards a knowledge-based economy. Have you seen progress in this area over the past couple of years? What are the areas, in your opinion, where Slovakia still lags behind?

JS: AmCham has always been very supportive of all the government’s efforts to progress towards a knowledge-based society. We appreciated the formulation of Slovakia’s Competitiveness Strategy and we strive to promote its main goals. But, most importantly, we look into concrete ways of transferring these plans from paper into reality.

Therefore, in the past year, we established our Committee on Business-Academic Cooperation, which brings together company experts, CEOs, university representatives, students and NGOs, with the aim of creating better links between business and academia.

We hope that by building these “bridges” between the business sphere and the education system, and by assisting the education system to better reflect the needs of the labour market, AmCham is contributing to progress towards a knowledge-based economy in Slovakia.

JS: AmCham considers Slovakia’s business environment strongly competitive. Of course, there is room for improvement, especially in the areas of pay-roll taxes, e-government or commercialisation of research.

Looking ahead, if Slovakia wants to remain competitive, it will be necessary to reinforce flexible labour market policies in order to retain the qualified workforce.

AmCham has been active in assessing legislation passed by the government. Are there any legislative measures that the business community still lacks to make their business smoother?

Actually, AmCham tends to advocate for less legislation with the aim of reducing the administrative burden on businesses and making the existing legislation as simple as possible.

There is a significant amount of unproductive, unnecessary and even harmful barriers in place in the present system. We advocate the removal of unnecessary administrative barriers to allow businesses to operate as productively and fairly as possible.

TSS: The Slovak government has been toying with the idea of a campaign to lure back Slovaks who have been living and working abroad. State officials said that this could be one of the ways to cope with the lack of qualified labour. Would such a campaign be an effective way of coping with the lack of qualified employees? Is, in your opinion, brain drain still a problem in Slovakia?

JS: On the one hand, it is quite instrumental for the personal development of young people to live and work abroad for some time.

They often return with fresh ideas, a different outlook and a new approach to conducting business. I do believe that such experience should actually be encouraged.

So, if the government creates favourable conditions for doing business in Slovakia, and there are many interesting employment opportunities in this country, there will be no need for any special campaign – Slovaks living and working abroad will return.

This was clearly demonstrated in case of Ireland, which experienced the positive effects of reversed migration as a result of its unprecedented economic expansion.

Of course, AmCham also seeks to retain the qualified workforce and prospective talents in Slovakia.

For the past nine years, we have organised our annual Job and Internship Fairs in Bratislava and Košice, through which we help young Slovaks find satisfying employment in their home country.

In addition, together with the U.S. Embassy in Bratislava, we have started a very successful Mentor Network Program.

The programme has three main objectives: to increase student awareness of successful companies in Slovakia, to encourage students to stay in Slovakia after graduation, and to send a clear message to universities that they are one of the region’s most valuable assets for economic development.


TSS: Which have been the most notable activities of AmCham recently? Could you share some of its planned activities with our readers?

JS: It’s difficult to choose from over 100 events we organise every year.

From the most recent events, I would like to highlight our Independence Day Celebration, traditionally held in the grounds of Bratislava Castle, and attended by more than 1,000 guests this year. This event has become a real tradition in the business and diplomatic communities.

As for our ongoing activities, we are conducting a series of seminars on euro introduction in various regions of Slovakia, with the aim of providing up-to-date information regarding all the necessary preparations related to the euro adoption process and its impact on businesses.
Recently, we have also started a new series of roundtable discussions on corporate social responsibility.

We are currently also preparing some events related to the US presidential elections and a major Venture Capital Forum.

In addition to our HR Conference in October, we will also host a major regional tax conference in March 2009.
And, of course, there is much more. As you can see, we are indeed a very active organisation!