AS the eyes of the entire sporting world are on Beijing, where the Summer Olympics open in less than a month, Slovaks have the chance to see China up close from home. 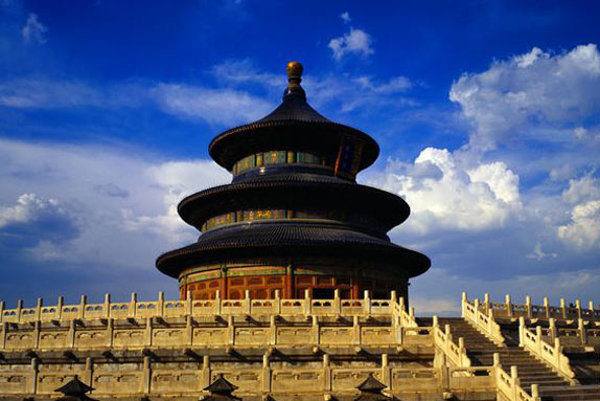 The Temple of Heaven in Beijing. (Source: Courtesy of SNM)
Font size:A-|A+

AS the eyes of the entire sporting world are on Beijing, where the Summer Olympics open in less than a month, Slovaks have the chance to see China up close from home.

The Experience China in Central Europe project is part of a series of events that the Olympic host has organised across the region.

“It is said that the basis of mutual understanding comes from knowing culture,” Chinese Ambassador to Slovakia Chen Jianfu said while introducing the project. “So when somebody wants to know China and the Chinese people, the place to start is with Chinese culture.”

The events provide Czechs, Poles, and Slovaks an opportunity to learn more about ancient Chinese culture and modern art.

On July 2, the Slovak National Museum opened an exhibition titled World Heritage Sights in China, which displays large images of Chinese sites and other items included on the World Heritage List. Some of the 35 sites are well-known monuments, such as the Great Wall of China, the Summer Palace, the Forbidden City, and the Terracotta Army.

But the exhibition's images also profile oral and intangible heritage, such as a Mongolian pastoral song, and part of it is devoted to the recent, devastating earthquake in Sichuan province. The exhibition is open until July 31.

This is not the first exhibition focused on China to be held in the Slovak National Museum.

“This is not an accident that the exhibition takes place in SNM because its collections contain probably the most information about Chinese culture in Slovakia,” said SNM director Peter Maráky. “Many of our artifacts were collected from the Orient, Far East and in particular from China.”

In 1990s, the SNM exhibited a large collection on Tibetan folk culture. Part of the exhibition has remained in its collections of musical instruments, and are lent to other exhibitions in Central Europe.

“These instruments are being exhibited in Prague during the Muzika Etnika,” Maráky said.

The series of events continued in Bratislava on July 3 and 4, when an ensemble of handicapped Chinese artists performed My Dream, a music-dance show. The next evening, the Heavenly Beauty of National Music ensemble performed ancient Chinese music on traditional folk instruments. Both ensembles earned standing ovations.

The project continues with Chinese TV Weeks, a series of programmes on Slovak Television that will explore Chinese culture through traditional medicine, tea, cuisine, and martial arts, such as Kung Fu, which has gained popularity around the world.