THE BLUE Angel, the main prize of the Artfilm International Film Festival, went to two films for the second consecutive year. But this time, the festival was prepared. 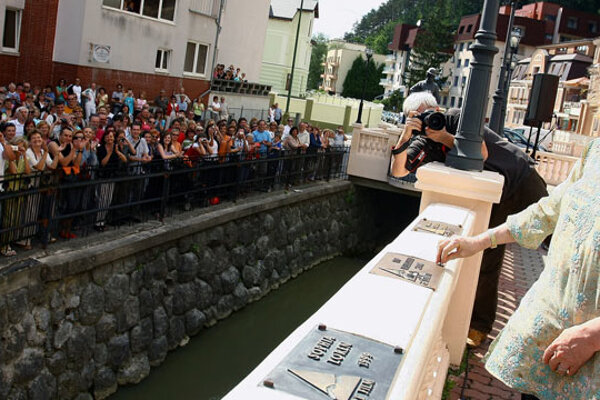 Liv Ullmann affixed a bronze plaque inscribed with her name to the Bridge of Fame. (Source: ČTK)
Font size:A-|A+

THE BLUE Angel, the main prize of the Artfilm International Film Festival, went to two films for the second consecutive year. But this time, the festival was prepared.

Teoman, and Wolfsbergen, a Dutch-Belgian movie by director Nanouk Leopold.

As two films won the main prize last year as well, the festival had two statuettes ready this year, just in case. The films will share the €15,000 award.

Summer Book, which explores everyday family life in a small Turkish town, received the award for its "original visual poetry and fine sensitive realism," the jury said. Wolfsbergen, which tells the story of a present-day Dutch family and its three generations, showed a "sensitive attitude and accounting of a complicated family situation".

Mungiu called for a discussion and then a secret ballot to come to a final decision, Marián Labuda, a Slovak actor and member of the jury, told the Aktualne.sk website.

But the ballot ended with both films receiving the same number of votes, so Mungiu decided to divide the main prize.

In total, 14 feature-length films competed for the Blue Angel prize at the 16th year of the festival, which closed in the spa town of Trenčianske Teplice on July 6.

The competition presents the most interesting films that young directors shot last year. This year, it included movies that had already been acknowledged at film festivals in Cannes and Rotterdam.

This year's festival offered more than 100 feature-length movies and 80 short films in competitive as well as non-competitive sections, discussions with actors and film directors, live concerts and workshops.

The Eastern Panorama Award for Best Central or Eastern European Film went to Macedonian director Teona Mitevska for the film I am from Titov Veles.

The film Terminus by Canadian director Trevor Cawood received the Best Short Film Award.
The Young and Critical Award went to the picture Flower in the Pocket from Malaysian director Liew Seng Tat.

This year’s festival offered free admission to Czech and Slovak students, which should continue in the future.