A NEW poll has found that the Smer party, led by Prime Minister Robert Fico, would receive 48.5 percent of the vote if parliamentary elections were held in July. 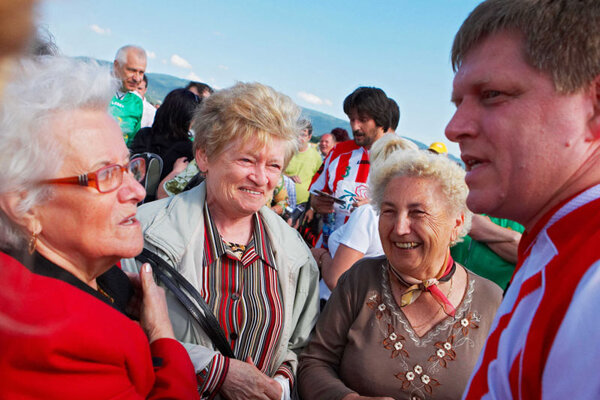 A NEW poll has found that the Smer party, led by Prime Minister Robert Fico, would receive 48.5 percent of the vote if parliamentary elections were held in July.

In other good news for the governing coalition, its two other members, the Slovak National Party (SNS) and the Movement for a Democratic Slovakia (HZDS), have also gained popularity since the same poll was taken a month ago.

Of the opposition parties, only the Christian Democratic Movement (KDH) has gained support among voters, albeit slight.

The poll was taken by a division of the Slovak Statistics Office on a sample of 1,063 respondents in the first week of July. Its results were published by the SITA newswire on July 15.

Respondents were asked: “If parliamentary elections were held today, which party, movement, coalition, would you vote for?”

Support for the SNS, led by Ján Slota, rose to 11.4 percent, up from 10.9 percent in June. The HZDS, led by former prime minister Vladimír Mečiar, received 9.6 percent, which is up by 1.4 percent.

The opposition Christian and Democratic Union (SDKÚ), headed by the former prime minister Mikuláš Dzurinda, lost the most support among voters, falling 3.6 percent since June to 9.7 percent.

Rounding out the opposition parties are the Hungarian Coalition Party (SMK), which fell from 10 percent to 8.4 percent, and the KDH, which rose just 0.3 percent to 8.2 percent.

The poll’s results mean that if elections were held in July, Smer would be awarded 76 MPs, making it the first party in history to have a simple majority in parliament.

The SNS would take 18 seats, the SDKÚ and HZDS would get 15 each, and the SMK and the KDH would have 13 each.

Of the poll’s respondents, 16.2 percent said they would not vote and 13.7 percent were undecided. The results were calculated only from the 70.1 percent of voters who supported a specific party.

The Smer party has declined to comment on the poll. Only Deputy Speaker of Parliament Miroslav Číž spoke to the press, telling the Hospodárske Noviny financial daily that the party is very appreciative of the public’s trust.

“It is a stunning number that has never occurred in Slovakia,” Horváth observed. “The closest was in 1992, when the HZDS got 74 seats.”

Miroslav Kusý, a political scientist, believes that Smer’s popularity is the result of the country’s prosperity.

“Fico hogs all the credit for the current success, like Schengen, the eurozone, the relatively increasing living standard, low unemployment rate,” Kusý told The Slovak Spectator.

Kusý said Fico refuses to acknowledge even the contributions his coalition partners have made to those successes.

“And, of course, he fails to mention that previous coalitions deserve credit for them as well.”

In fact, Fico portrays the members of previous administrations as troublemakers and obstructionists, Kusý said.

He has even gone so far as to call them enemies, he noted.

“This is typical of every demagogue and populist – he tries to create an enemy to blame for any failures,” Kusý said.

Kusý compared Fico’s tactics to those of Klement Gottwald, who was chairman of the Communist Party of Czechoslovakia from 1945 until his death in 1953.

“Fico considers anyone who disagrees an enemy that must be eliminated,” Kusý said.

He added that Fico is unwilling to negotiate with anyone he considers an enemy. “But such dialogue is part of a democracy. The Communists acted like this.”

Kusý noted that Fico often characterises the media’s reporting on coalition scandals as propaganda spread by the opposition.

A recent example, he said, is the case involving whether Finance Minister Ján Počiatek gave financial groups advance warning of when the European Central Bank would reset the central parity between the Slovak crown and the euro.

“Fico chose this tactic. But I am sure that there are limits,” Kusý said.

Problems will occur when the public starts to feel the pinch of euro introduction, Kusý reasoned.

“And taking all the credit for acceptance to the eurozone means he will also bear all the responsibility for the complications that emerge from it,” Kusý concluded.