SWEDISH companies active in Slovakia believe the country has been worth their investment, according to a representative from the Swedish Trade Council. 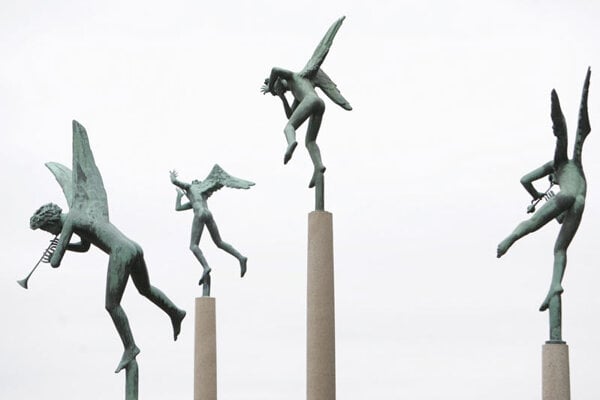 Sculptures at the Millesgarden in Stockholm. (Source: SITA)
Font size:A-|A+

SWEDISH companies active in Slovakia believe the country has been worth their investment, according to a representative from the Swedish Trade Council.

While their focus is now on machinery and the electrotechnical industry, future opportunities are seen in exporting environmental technologies, fashion and design.

But they have also observed a lack of foreign language proficiency among their Slovak employees and a grey economy that they consider one of the drawbacks of doing business here.

There are currently about 50 Swedish daughter companies active on the Slovak market generating jobs for about 3,500 employees, according to the Swedish Chamber of Commerce in Slovakia. The companies produce approximately Sk20 billion in turnover and contribute Sk8 billion to exports.

“It is generally a profitable market for them [Swedish companies], meaning a market that was worth entering,” said Radoslav Jonáš, a country manager with the Swedish Trade Council. “They see this as a market with good growth potential.”

Jonáš referred to the results of a survey on the Slovak business climate that the Council conducted in 2006.

Swedish companies praised Slovakia’s foreign investor-friendly legislation, companies’ record of paying invoices, and the tax system. They stated they were not troubled by the differences in bookkeeping.

Swedish companies also expressed satisfaction with the quality of Slovak banks, the ability to establish a company, rent or buy land, flight connections, and phone and internet services.

However, foreign language proficiency is still limited and access to information from state authorities is unsatisfactory, they said.

Other areas of concern are the grey economy, which the companies said does influence profitability though corruption does not, frequent changes in legislation, and insufficient infrastructure in central and eastern parts of the country.

This year, the Swedish Trade Council mapped the most dynamic areas of economic cooperation between the countries.

“It is machinery production,” said Jonáš. “This is an area that has a long tradition in both countries. We also see a lot of room for cooperation in the outsourcing of different processes, in the electrical engineering industry and the energy supply equipment industry.”

High-end environmental technologies, the food industry, fashion, and design are seen as the industries with the most potential for future Swedish exports to Slovakia, Jonáš said.

However, the average growth of Swedish exports to Slovakia was 11.5 percent over the last four years, while Slovak exports to Sweden averaged 37 percent growth over the same period.

In 2007, Swedish imports from Slovakia reached almost Sk12.7 billion. Slovak exports to Sweden are mostly made up of television receivers and machinery production.

“But we should mention that Swedish production firms in Slovakia contributed a lot to the exports to Sweden,” said Ruben Kemény, president of the Swedish Chamber of Commerce in Slovakia. “The statistics do not also include all Swedish exports to Slovakia, as it is estimated that about one third of Swedish exports, including cars and ball bearings, go through third countries.”

While large Swedish brands such Ericsson, ABB, Volvo Truck, and Scania are sold in the Slovak market, it is mainly small and medium Swedish companies that have established their plants in Slovakia.

SCA Hygiene Products is among the largest Swedish producers in Slovakia, with a plant in Gemerská Hôrka.

Sapa Profily, located in Žiar nad Hronom, is a producer of aluminium profiles. Formerly named Alufinal, it was established in 1969 by Slovak aluminium producing company ZSNP and acquired by Swedish firm Sapa AB in 2006.

“The reason for the acquisition was extending Sapa’s operation into the emerging markets of Central and Eastern Europe,” Ľubica Gáfriková, marketing manager of Sapa Profily, told The Slovak Spectator.

The company said the strengthening Slovak currency is affecting its exports and that it senses a lack of qualified labour. Sapa Profily has 370 employees in Slovakia.

Swedwood, which produces wooden furniture for Ikea, has plants in Závažná Poruba, Trnava, and Malacky.

In 2007, Swedwood told the SITA newswire that it was planning to build a sawmill valued at more than Sk500 million at the site of the bankrupt Kysuce sawmill in Krásno nad Kysucou.

The new company started test production in July 2008 and will employ about 300 people. Swedwood picked Kysuce due to the spruce forests and tradition of wood processing.

The Swedish Trade Council has been present in Bratislava since 1974. It serves the Swedish government and businesses, with a main mission of supporting Swedish exports.

The Swedish Chamber of Commerce in Slovakia was officially opened in April 1997 and is an association of mainly Swedish companies operating in Slovakia. It currently has 46 members.