The small team with big ambitions

THE SLOVAK TEAM which will compete at the Olympic Games in Beijing will have only 57 members, but medal hopes are higher than ever before. The Slovak contingent boasts a number of world and European champions as well as medallists from previous games. 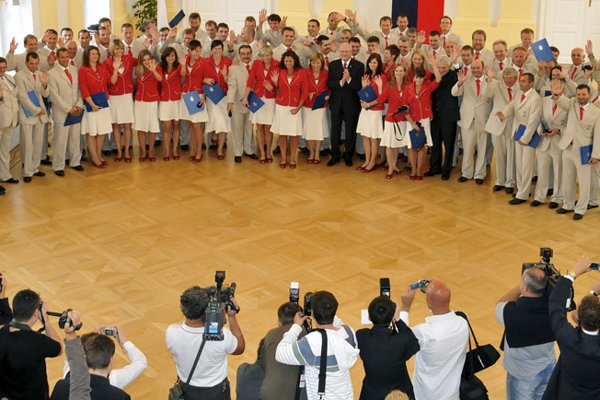 THE SLOVAK TEAM which will compete at the Olympic Games in Beijing will have only 57 members, but medal hopes are higher than ever before. The Slovak contingent boasts a number of world and European champions as well as medallists from previous games.

On July 24, gymnast Ivana Kováčová, an Olympic rookie, and three-time Olympic windsurfer Patrik Pollák ceremonially promised President Ivan Gašparovič on behalf of the entire Slovak squad that they will strive to achieve the best results possible within the spirit of fair play during the games.

Gašparovič, known to be a great sports fan, will travel to Beijing along with Education Minister Ján Mikolaj to attend the opening of the XXIX Olympic Games on August 8. He will remain in China until August 14 to watch some of the Slovak athletes compete.

“Our medal hopes are the highest in years, particularly in water events,” said Gašparovič after the ceremony. “Both slalom and flatwater canoeists have excellent prospects of winning medals. We all know that is our strength.

“But I also believe that our shooters will do well. Slovakia also has a great tradition in wrestling and weightlifting,” he told the SITA newswire.

The water slalom team is the most promising. Out of its five members, four have already won Olympic gold. Twin brothers Peter and Pavol Hochschorner, who will compete in the C-2 (canoe double) category, brought home gold medals from two previous Olympiads, Sydney in 2000 and Athens in 2004.

Michal Martikán, a four-time world champion in the C-1 (canoe single) category, will be competing in his fourth Olympics. In Atlanta in 1996 he won gold, becoming the first Slovak athlete to win Olympic gold since Slovakia became independent in 1993. At the following two Olympics he took home silver medals. This year Martikán has adjusted his training regimen to concentrate completely on the Olympics, going so far as to pass up the world championship in his event to keep his focus on Beijing.

“I consider the channel in the Beijing’s Shunyi Olympic Rowing-Canoeing Park to be the most demanding artificial course in the world,” Martikán told SITA. “This suits me because I prefer more challenging white water. But this does not mean that I will have an advantage. On such water anyone can make a mistake at any second.”

The only woman in the water slalom team, Elena Kaliská, who won gold in the K-1 (kayak single) in Athens, will have the honour of bearing the Slovak flag during the opening ceremonies.

František Chmelár, the head of the Slovak Olympic Committee, ranks 13 or 14 Slovak athletes among the world’s best. The committee is predicting six medals and 14 diploma positions (as high as 8th place) for Slovak competitors.

“There is Marián Ostrčil, who was the C-1 world vice champion last year. The double kayak team with Ivana Kmeťová and Martina Kohlová finished fourth,” Souček told the Spectator. “So in flat water we have three canoes that could win medals.”

“Apart from seasoned multi-medallist Jozef Gönci, who will compete in three categories, we have the new record holder and European champion Danka Barteková and another world record holder, Zuzana Štefečeková, who won the silver at the European championship,” said Souček. “Mário Filipovič won the men's trap title at the test event Good Luck Beijing in April. So we have seven excellent shooters who could easily win three or four medals.”

Among other athletes with chances to win, Souček singled out one-time world champion weightlifter Martin Tešovič and wrestler David Musuľbes. Musuľbes, a winner in the Sydney Olympics representing Russia, was granted Slovak citizenship in 2007. Earlier this year, Musuľbes won the European championship.

Twenty-four Slovak athletes will compete in track and field events. Souček singled out Libor Charfreitag, Martina Hrašnová, both hammer throwers, and runner Lucia Klocoková as the best prospects for medals.

The team of Slovak athletes nominated for the Olympic games in Beijing is the smallest contingent ever in the history of independent Slovakia. While in Atlanta in 1996 Slovakia had 71 athletes, in Sydney in 2000 they numbered 108 and in Athens 64. Now 57 sportsmen and sportwomen will compte in Beijing.

Their overall hopes are high.

"The quality of the top athletes is higher than in the past but we have fewer athletes overall,” Souček said.

“Last year the outlook was more optimistic,” Souček told The Slovak Spectator, “but, simply put, the situation in sports in Slovakia is not too rosy."

Souček ascribes this to a variety of reasons, finance being the most important.

“The money which the state allocates for sports has not changed over the last seven years and is about Sk1 billion a year for all sports,” said Souček. “Since the sum allocated does not reflect the inflation, funding of sport is actually going down [in real terms].

“This financial shortage has caused sports associations to spend most of their money to support top athletes who compete in major events, leaving almost nothing for youth activities,” said Souček. “Consequently, we are experiencing a generation gap. There is no pool from which to draw young athletes.

“Paradoxically, Slovakia could come out with its best results in Olympic history in Beijing at exactly the same time that the overall situation in sports is at its lowest ebb.”