Regional culture with a long reach 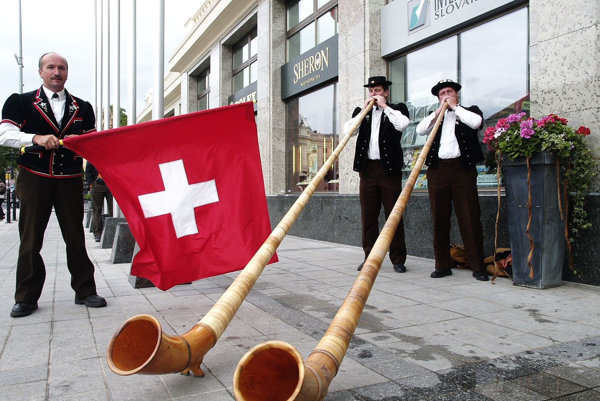 So many people would be surprised to hear that Switzerland does not have a Culture Ministry. Instead, cultural events and promotional programmes are planned and implemented by each of the country’s regions, or cantons.

“This results in an extensive range of cultural activities in various parts of the country,” Zuzana Dudášová, the assistant for culture at the Swiss Embassy to Slovakia, told The Slovak Spectator.

Switzerland follows this structure in Slovakia as well. Pro Helvetia, a foundation financed by the Swiss government to promote culture abroad, operated a branch in Bratislava until 2005. It supported concerts, public readings, and translations of Swiss literature into Slovak.

“The foundation no longer has direct representation in Slovakia and there is no Swiss cultural institute here, so cultural projects are mostly put together through Swiss and Slovak artists contacting each other and an event’s organisers,” Dudášová said. “In many cases, the cooperation is a continuation from the past.”

“One of the biggest projects that the Swiss Embassy organised was Swiss Night in June 2007,” Dudášová continued. “In cooperation with the Aréna Theatre and under the direction of Jozef Bednárik, artists managed to create an all-embracing ‘theatre’ about Switzerland and the Swiss, about how we see them, and how they see themselves.”

Swiss Night was one in a series of projects – including Jewish, Austrian, and German Nights – that the Aréna Theatre organised to familiarise Bratislavans with a different culture.

The month’s activities included Swiss musicians and fine artists showing their work in the Slovak capital, tourism events promoting Switzerland and its cuisine, and a series of Swiss films at the Mladosť cinema.


The Swiss Embassy is also taking part in long-term projects.

For example, the Bridge Guard project enables one to two artists to spend three to six months at a one-bedroom apartment near the Mária Valéria bridge, which connects Štúrovo, Slovakia with Esztergom, Hungary. The apartment is free and living costs up to CHF500 (Sk9,270; €306) are paid so that the artist can focus on their work with minimal distraction.

Artists from Germany, Spain, and the Netherlands have “served” as Bridge Guards, as have Interpixel, visual artists from Switzerland.

The project marked the reopening of the bridge in 2001, after it was destroyed by retreating German troops during World War II.

“Karol Fruehauf, a Swiss of Slovak origin, conceived the project,” Dudášová told The Slovak Spectator. “He meant it to be a type of Artist in Residence programme for people from professions that emphasise uniting, connecting, and bridging.”

Dudášová mentioned that the embassy had also supported some film screenings.

“There was a screening of Memories for the Future – Jews in Komárno, a documentary by Peter Scheiner, a Swiss director of Slovak origin,” Dudášová said. The documentary relates the history of the town’s Jewish community, which totalled 2,500 before World War II but has now shrunk to just 50.

It shows that on one Sunday each June, the citizens of Komárno meet at the local Jewish cemetery to commemorate those who were deported to their deaths in June 1944.

The film uses commemorations from three years to pose lingering questions about the future of the town’s Jewish community. It also aims to bridge the gap between East and West by bringing together people who knew little about each other during the Cold War.

“We also support the participation of Swiss documentaries at the annual One World festival in November and obtain Swiss films for the International Festival of Francophone Films in March,” Dudášová said. “Both festivals have their regular visitors and are very popular.”

Dudášová recalled a visit from Jean-Luc Bideau in 2005. The well-known Swiss actor and director arrived with his wife, a Czech native, to speak at a retrospective of his movies, many of which are Swiss and French cult films.

The embassy is supporting a concert by Swiss duo Albek. Twin sisters Ambra and Fiona will play piano and violin within the Bruno Walter Music Days on August 6 in Bratislava. It is also working with the Soga auction house on preparing an exhibition of Slovak and Swiss artists to be held in the autumn.The exhibition will revolve around the theme of humour in art, how Swiss and Slovak artists use it in their works and how it is understood in the two cultures.

“The exhibition was Herczeg’s idea,” Dudášová said . “He was born and lives in Switzerland, but his parents come from the former Czechoslovakia.”

Sculptor Pavel Schmidt’s plan for the exhibition is to create sculptures of both country’s national heroes: William Tell and Juraj Jánošík.

“The Swiss are discovering Bratislava as a city of music,” Dudášová said. Many of them travel to Vienna to attend cultural events and stop by the Slovak capital for classical music concerts and opera, she said.