- AS interest in the United Kingdom and Ireland has waned among Slovak job seekers, interest in Switzerland is actually on the rise. 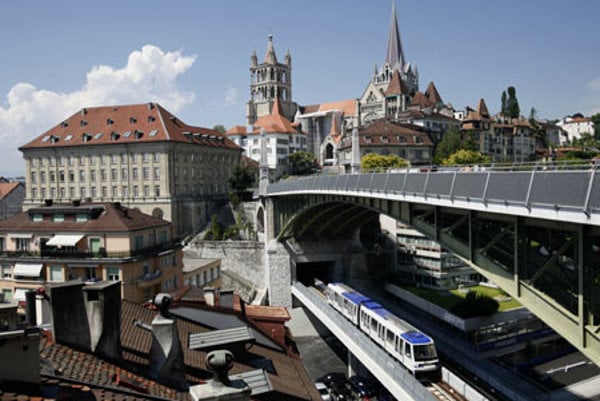 - AS interest in the United Kingdom and Ireland has waned among Slovak job seekers, interest in Switzerland is actually on the rise.

According to Ivana Molnárová, sales and marketing director of Profesia.sk, the increase in the number of Slovaks going to work in Switzerland is slight but telling compared with the number of those who are choosing to stay in the country or return home from more traditional locations.
Profesia.sk wrote in a press release this April that 15 percent of Slovaks using its website are seeking work abroad, which is down from a high of 20 percent two years ago. Interest in UK-based jobs has fallen by as much as half, while interest in working in the Czech Republic, Ireland, Germany and Austria has also dropped.

Molnárová believes there are several reasons for the change. First, the strengthening Slovak crown has made the currency more competitive with the euro and the US dollar. Second, foreign investment in the Slovak labour market is creating numerous new job opportunities and a demand for qualified labour, which has pushed salaries up. And finally, most Slovaks who go abroad fail to find fulfilling employment, and end up working in hypermarkets, the tourism sector, and construction.

“The main reason for young, educated people to work abroad is to earn some money that can be used for housing when they come back home,” Molnárová told The Slovak Spectator. “After returning, they try to find a job that fits their qualifications.”

Meanwhile, the number of Slovak job seekers heading to Switzerland and Holland has slightly increased.

Switzerland has a reputation as a country with some of the highest salaries in Europe and enough jobs, even for foreigners.

According to Miriam Bollhalter Marenčáková from the Reelpart Personal Agency, which is based in Switzerland, the people who want to work in Switzerland can be grouped into three categories. The first are those who want to save money that they can bring back to Slovakia. This group usually has the lowest level of education, she said. The second, and smaller group, consists of qualified workers with secondary or university education.

“They want to work in a German-speaking country because they have learned German at school and want to ‘see the world’,” Bollhalter Marenčáková said.

She added that, of course, salary plays a role for these people as well.

But since Switzerland is not a member of the EU, Slovaks need a permit to work there.
“The rules are set up so that foreigners can only get a work permit if there is no one adequate for the job among the local population,” Bollhalter Marenčáková told The Slovak Spectator.

Applicants need qualifications and have to verify their education with diplomas and certificates translated into German. A recommendation from a previous employer, an abstract from the criminal record, and proof of financial security are also required, said Bollhalter Marenčáková, who has extensive experience with applying for permits.

This doesn’t apply to agricultural workers because there is currently a shortage of them in Switzerland, so a permit for seasonal work isn’t difficult to get, Bollhalter Marenčáková said. But the conditions of that kind of work are not what Slovaks expect from Switzerland, she added.
“From my experience I can say that many Slovaks are very quickly disappointed by these jobs, because the work is hard and the compensation is unsatisfactory,” she said.

Bollhalter Marenčáková said a lot of Slovaks who have taken seasonal jobs come to Reelpart looking for advice. Those with some qualifications can get a better job, provided they speak at least intermediate German, she said.

“Simply put: qualified, German-speaking workers and experts have the chance to get the same jobs at the same salaries as the Swiss, whose salaries are very competitive across Europe,” Bollhalter Marenčáková said.