Swiss money is on its way

one exception being a Slovak financial group which recently bought a Swiss private bank. But the so-called Swiss Financial Mechanism is expected to provide a new impulse for cooperation between the two countries. This is money which Switzerland will use to support mainly the new EU member countries in exchange for access to the enlarged EU single market. 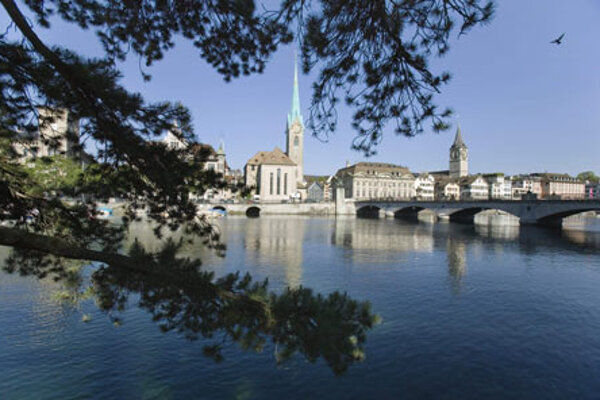 one exception being a Slovak financial group which recently bought a Swiss private bank.
But the so-called Swiss Financial Mechanism is expected to provide a new impulse for cooperation between the two countries. This is money which Switzerland will use to support mainly the new EU member countries in exchange for access to the enlarged EU single market.

Machinery, chemicals, and the pharmaceutical industry have been traditional areas of cooperation between Slovakia and Switzerland, said Zlata Šipošová, commercial attaché at the Slovak embassy in Bern, Switzerland’s capital. Energy, transport, and the construction industry also have been important fields.

“Swiss experience in constructing tunnels has been used several times in Slovakia,” Šipošová told The Slovak Spectator. “Recently, a project to build a hospital waste incineration plant [in Slovakia] was completed as part of a Swiss development assistance project.”

Slovakia sees opportunities for future cooperation in the energy sector, for example, in technologies for using waste to generate energy and in the areas of hydro-electric and renewable energy production.

“Switzerland has the highest share of electricity produced by hydro-electric plants in Europe: 60 percent, which means it has a lot of experience in this area which we can use,” she added.
Switzerland is also considering building new nuclear power stations and is interested in Slovakia’s experience in energy market liberalisation, according to Šipošová. Tourism also offers more opportunities for cooperation, including investment in the construction of accommodation in Slovakia.

Over the last few years, the dynamism of business cooperation between Switzerland and Slovakia has become stronger, she said. Between 2000 and 2006 the volume of trade increased by 54 percent and Slovak imports from Switzerland increased by 86 percent.

Switzerland is not an EU member but its membership in the European Economic Area gives it access to the EU’s single market. However, in return for this the Swiss Confederation also has to commit to provide financial support to the EU, principally via its new members.

The support, called the Swiss Financial Mechanism, is intended to be a kind of a compensation for advantages which Switzerland gets from its access to the recently-enlarged EU single market. New members will be able to use the financial mechanism in the form of non-repayable grants.

Negotiations on the Swiss financial mechanism took place in 2007 and a framework agreement was signed in December. The mechanism is now being put into action and will continue for five to ten years.

“The Swiss Financial Mechanism will be an important development impulse for economic cooperation,” Šipošová said.

Projects will be evaluated mainly from the perspective of the benefits they could bring in terms of easing economic and social regional disparities in Slovakia. The government will be the contact point between receivers and the financial mechanism.

The Swiss Confederation will provide financial resources of CHF1 billion (approximately €616 million) for new EU members which joined the union in 2004 and an additional CHF257 million (about €158 million) for Romania and Bulgaria. Based on its distribution mechanism, Switzerland has allocated CHF66 million (about €41 million) for Slovakia.

The Slovak economy is perceived in Switzerland as stable and having enjoyed strong economic growth since 2001. Swiss business people value the high pace at which Slovakia’s exports and imports have grown every year since the beginning of this decade, Šipošová said.

Slovakia’s efforts to shift its foreign trade from the former Soviet bloc and eastern Europe to European Union countries and the European Free Trade Association is also well known in Switzerland. Swiss businesspeople also appreciate the high productivity in Slovakia, since three quarters of Slovak GDP is created in the services sector, which employs incomparably more people than industry and agriculture, she added.

The introduction of the flat income tax, and the fact that it has been maintained, has also earned the respect of Swiss businesspeople, mainly because of the stability it has brought to the Slovak business environment.

“However, Swiss companies have also already experienced some problems with the lack of qualified workers in Slovakia,” Šipošová said.

She also added that the view of Swiss entrepreneurs about the Slovak business environment has been rather polarised. On the one hand, Swiss businessmen have had positive experiences. On the other, there have been negative experiences connected with suspicions of corruption and fraud in Slovakia in the past.

But there are growing positive signals from some Swiss firms which in the past said they had had negative experience with the Slovak business environment, including bureaucracy, non-transparent competition conditions and unreliable partners.

“Thanks to the changed business climate, they are considering coming back to Slovakia, or to making or enhancing acquisitions in Slovakia,” Šipošová told The Slovak Spectator.

It is also expected that the introduction of the euro in Slovakia from 2009 will have a positive impact on the development of business and investment relations between the two countries, she added.

Even though Switzerland is not an EU country it has several bilateral agreements with it and has also agreed to join the Schengen Treaty, enabling free movement of people.

Switzerland is the second largest business partner of the EU, after the USA but ahead of China, Šipošová added.

In general, the euro’s introduction in Slovakia is expected to bring increases in foreign trade by making business in Slovakia easier and safer for foreign partners, according to Šipošová.

“The introduction of the euro is considered to be an important stimulus for Swiss-Slovak cooperation in the forthcoming period,” she said.

“On the other hand, Slovak firms do business in Switzerland on an incomparably smaller scale,” Šipošová said. “You can, for example, eat in a Slovak restaurant near Bern or in Zurich, you can let a Slovak travel agency organise your holiday, provide services on the internet market, or in IT.”

However, quite recently, in 2005, Slovakia’s J&T Financial Group acquired a Swiss private bank, IBI Bank AG. Since July 1 this year, the bank has been active in the financial market under a new name, J&T Bank Schweiz, with its headquarters in Zurich and a branch in Lugano.

Slovak exports to Switzerland in 2007 rose by 26.8 percent compared to 2006, to reach Sk11.621 billion. Imports from Switzerland to Slovakia grew year-on-year by 16.2 percent and reached Sk11.502 billion. The overall turnover of foreign trade represented Sk23.124 billion in 2007, a 19.5-percent increase compared to the previous year.

Traditionally, Slovakia imports from Switzerland chemical and pharmaceutical products. It also imports industrial machinery and equipment for the electro-technical industry.

The Swiss company Nestlé entered the Slovak food market in 1992 when it acquired the Carpathia company in Prievidza. The company has mainly focused on production of dehydrated soups there.

Engineering group ABB operates in Slovakia through its operations in Žilina and Košice, mainly in the fields of energy, and the automatisation of production processes and technologies. It employs 177 people in Slovak companies.

Holcim Slovensko is part of Holcim Ltd., one of the world’s biggest producers and suppliers of cement, gravel aggregate and transported concrete. The company employed 570 people in Slovakia as of the end of 2007. It has several operations in Slovakia, with its central production plant in Rohožník.

Swiss glass producer Vetropack bought the bankrupt Slovak glassmaking plant in Nemšová in 2002. This meant that in 2007 the Nemšová plant was able to celebrate its 105th anniversary of production.

The Rieker company produces shoes in Slovakia, where it has a base in the southern Slovak town of Komárno. Its Slovak subsidiary, Rieker Obuv, enrolled in the Slovak Business Register in 1992.