A new era for calvary in Banská Štiavnica 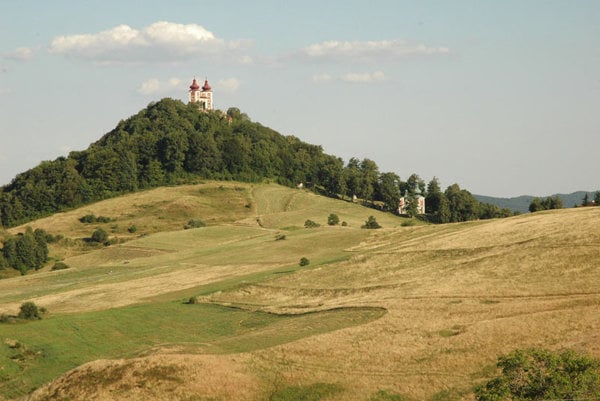 The 18th–century Calvary Complex is one of the dominant features of Banská Štiavnica. (Source: Courtesy of the Calvary Fund)
Font size:A-|A+

This includes the inhabitants of Hünenberg, Switzerland, who recently donated CHF10,000 (more than €6,100) to the restoration effort.

Banská Štiavnica and Hünenberg have been partner towns for four years. And according to Pavol Balžanka, the mayor of Banská Štiavnica, the donation to restore the complex is an example of just how much the relationship has developed.

The partnership began on the national level in 2004, when Slovakia and Switzerland set up an educational exchange.

The goals were to impart knowledge and teaching skills, exchange teaching materials, and organise stays for teachers, pupils and their parents, Balžanka said.

“And afterwards, perhaps thanks to the good experiences on both sides, we couldn’t resist partnering with a town in Switzerland, even though there were no historical connections between Hünenberg and us,” Balžanka told The Slovak Spectator.

Since then, both sides have realised they actually have a great deal in common, he added.
“We are very happy to say that the partnership is gradually moving to more than just an official level,” Balžanka said.

The connection between the towns’ inhabitants has flourished through a pen-pal programme between local schoolkids, football matches, and an exhibition by photographers from Banská Štiavnica that opened in Hünenberg.

Balžanka acknowledged that maintaining a good-quality partnership is demanding financially and time consuming, which is why he is glad that the relationship with Hünenberg is going so well.
“The donation to restore the Calvary Complex is significant and great because it supports something that we really care about and that extends beyond regional and national interests,” Balžanka said.

He added that it has also helped invigorate the restoration effort, infusing it with positive and creative energy.

The Calvary Complex of 25 baroque churches and chapels, arranged symmetrically from the foot to the top of a hill outside the town, took seven years to build and was completed in 1751. The project was started by a Jesuit named František Perger in 1744. The buildings are not only of architectural value, but can also be viewed as a fine art gallery because they illustrate Christ’s Stations of the Cross.

Martin Macharík from the Calvary Fund, an association that was established to save the Calvary Complex, said the core of the problem is in the property rights and relations.

The original Calvary Fund took care of the complex for over 200 years, until 1951, when the association was dissolved by the Communist Party.

After the fall of communism in 1989, nobody claimed the complex, so it was divided between the Catholic Church, the state forest company, and the city of Banská Štiavnica, Macharík explained.

“So we have organised the owners and volunteers and are trying to continue the work that was stopped in 1951,” he said.

In June 2007, the complex was included on the World Monuments List by the World Monument Fund in New York, which lists the 100 most endangered monuments in the world. Monuments that appear on this list usually receive increased attention from international organisations. Macharík says the listing resulted in a $155,000 donation for the restoration this year.

Even so, the complex requires further funding, Macharík said. He pointed out that it has been neglected for decades, so literally everything is damaged.

“But the real way to save the complex is to bring life back to it, otherwise it will be neglected again, and we will have to restore it in another 50 years,” he said.

The fund aims to revive the religious ceremonies and pilgrimages to the complex and promote it as a venue for concerts, debates and events for children.

There are still no precise figures about the cost of the renovation, but Macharík estimated it at Sk50 million (over €1.6million) and the restoration of the art at another Sk50 million. He said the fund currently has Sk27 million (almost €900,000), mainly from the VÚB Foundation, the Ministry of Culture, and Hünenberg’s donation.

Macharík said that one of the fund-raising proposals is an adoption programme that would allow companies, towns, villages, and individuals to support one of the complex’s chapels with regular donations.

Balžanka, the mayor of Banská Štiavnica, believes that the inhabitants of Hünenberg will have their own chapel in the complex one day that’s dedicated to them and stands as a symbol of solidarity with Banská Štiavnica.

“For us [their donation] is another step made by our common four-year-old child: partnership,” Balžanka said.