PRIME Minister Robert Fico has proclaimed his deep respect for it; Ján Slota, chairman of the Slovak National Party (SNS), considers it the ‘mother of the nation’. But political analysts, as well as historians consider the Matica Slovenská (MS), a Martin-based, state-funded cultural heritage institution, an anachronism and accuse it of having become politicised. 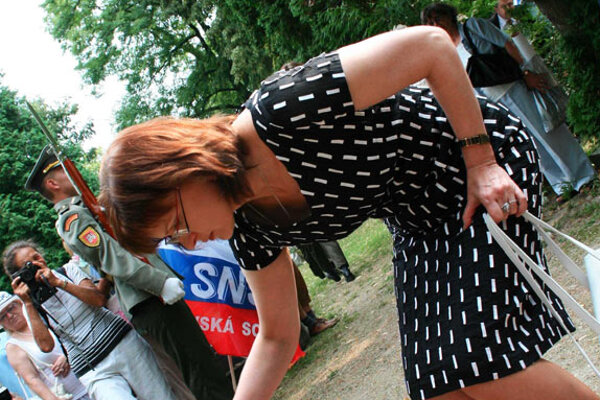 PRIME Minister Robert Fico has proclaimed his deep respect for it; Ján Slota, chairman of the Slovak National Party (SNS), considers it the ‘mother of the nation’. But political analysts, as well as historians consider the Matica Slovenská (MS), a Martin-based, state-funded cultural heritage institution, an anachronism and accuse it of having become politicised.

Slota successfully lobbied for Sk10 million of public funds to celebrate the MS’s 145th anniversary, announcing: “We have common spiritual roots with Matica.” He did not try to conceal that he intended to obtain a three-fold funding increase for the MS from the state treasury. Last year, the MS received Sk46 million to fund its activities.

According to the relevant law from 1997, the MS is characterised as a public institution. Its activities are various. The law stipulates its duties, such as strengthening Slovak patriotism, deepening the connection of citizens with Slovak statehood, and caring for and improving national cultural heritage and giving it contemporary relevance.

According to Slota, Sk10 million is not enough for the MS’s celebrations. “I think we should have given more,” Slota said to journalists in Martin on August 2, before the evening’s festivities.
One part of the Sk10 million went to the reconstruction of a local amphitheatre, according to Martin’s mayor, Andrej Hrnčiar. The celebrations in the city lasted for four days, between August 1 and 4.
Fico took part in the meeting, apparently unconcerned that a rival coalition party, the SNS, had co-organised the celebrations or that Slota had arranged big subsidies for them. He did not even seem to mind that in the amphitheatre, many flags with SNS logos flew during the opening of the celebrations. “I am convinced that everyone who loves Slovakia came here today [sic],” Fico stated at the meeting on August 2.
According to the PM, “strengthening historical and national awareness is one of the priorities of government policy”.
Fico added that God must like the Matica, since across the rest of Slovakia “rain was pouring,” but in Martin the sun was shining, allowing the celebrations to take place.

In his speech, Fico launched another of his now familiar attacks on the media. “How can we intend to persuade people to join their fates with the fate of Slovakia if, for instance, the owners of one influential Slovak daily openly congratulated Hitler on Munich?” Fico did not explain to which daily he was referring. Nor did he comment on the irony that the Matica itself worked with the pro-Nazi wartime regime in Slovakia.

The Medialne.sk website subsequently reported, on August 4, that Fico was referring to Northcliffe International, the publisher of the Pravda daily, which is owned by the same company whose British flagship The Daily Mail briefly supported Hitler in 1938.

Speaking at the celebrations, Slota noted that in 1848 Slovaks proved that they could defend themselves with guns and terminate the Hungarian militia, the honveds. He said that “some crazy Hungarian chauvinists … try to persuade the world that they, not the Slovaks, are the autochthonous [i.e. native] nation of the Carpathian basin.” Slota criticised Hungarian politicians, none of whom, he said, is willing to “admit that their homeland is probably the Gobi Desert in Mongolia”.

Fico also recalled that last year he asked the MS to concentrate its cultural activities more in the south of Slovakia, where most inhabitants are of Hungarian origin. “We must care about the integrity of our territory,” Fico said, adding that the MS celebrations could take place in southern Slovakia in the future. “Let us go out to meet people who need to be encouraged and spiritually supported.”

The president of the Matica, Jozef Markuš, said that his organisation had experienced more years of oppression and bans on its activities than freedom.

But he said he believes this ratio will change, adding that all who wanted to liquidate the MS have come away hurt and empty-handed in the end.

Slovakia and the Slovak language are subject to new problems and tornadoes, according to Markuš. “We therefore need to foster patriotism, and even solidarity and concord among Slovaks,” Markuš concluded.

Dušan Kováč, a historian and vice-chairman of the Slovak Academy of Sciences, stressed that the Matica is an abnormal institution which currently has no justification.

Matica was founded in Slovakia in the period of strong oppression, when no Slovak schools, or cultural institutions existed, according to Kováč. “Back then, it was created as a defensive institution. Today, we have nothing we need to defend ourselves against,” Kováč told The Slovak Spectator.

Kováč said the MS is defined, in the beginning of the law which governs it as a public institution, but then, according to the following paragraphs and as a reflection of its activities, it is defined as more of a club, or association. It lacks any public oversight. The president of the MS as the main statutory official is elected by members of the MS, not by parliament or any independent body.

“This is a deep discrepancy, which should be addressed, in my opinion,” Kováč said.
Political analyst László Öllős pointed out that in the 21st century, any institution that characterises itself as national is problematic. This organisation decides itself what is national and what isn’t. Those who don’t agree with its decisions, are automatically excluded from the nation.

“Or they are assessed as second-class members of nation,” Öllős told The Slovak Spectator.
He also pointed out that the Matica should be independent, and not cooperate with any political party, either personally, in its programmes, or through its events.

“This is the second problem which the Matica struggles with,” Öllős added.

Political analyst Miroslav Kusý also said that the MS’s activities are too politicised.
“These were not celebrations of the Matica, but rather SNS celebrations,” Kusý told The Slovak Spectator. According to him, the MS has now become a political party. “Matica has long since lost its justification,” he added.

Referring to Fico’s call to send the MS and its supporters to regions where the members of Slovakia’s Hungarian-speaking minority live, Kusý stressed that the prime minister has for some time fought to win over the SNS’s supporters.

“In fact, Fico is trying to pinch Slota’s girl,” he said.

“It is disgusting to play the Hungarian card”, Kusý added.

Kusý said the MS’s warm relations with the present government are reminiscent of those which Vladimír Mečiar’s government enjoyed with it in the mid-1990s.

Mečiar’s government for instance sold the Neografia printing house to the MS in 1997 for a symbolic Sk1, though its value was estimated by economists to be half a billion crowns. Neografia is now considered the most modern printing facility in Slovakia; it has annual revenues are around Sk1.5 billion.

The Matica Slovenská was founded in the middle of 19th century, to defend Slovaks against the Magyarisation of the state. It became a model of religious tolerance, as its first president Štefan Moyses was a Catholic Bishop, and its vice-president Karol Kuzmány an Evangelical Superintendent.

In 1875, the MS was closed down by the Hungarian authorities. It was revived only in 1919, after the formation of Czechoslovakia.

During the wartime fascist Slovak State, which was a satellite of Hitler’s Germany, it collaborated with the government. During communism, its activity was limited mostly to maintaining its library.