THERE is no need to introduce Italy to Slovaks, who flock to its historical sites and beaches over the summer holidays. Slovaks also know Italy as the native country of world-class painters, sculptors, and musicians, as well as a country with a rich cinematography. Of course, Italian cuisine is another phenomenon beloved in Slovakia. And, most recently, the arrival of Italian investors has made this country and its language even more interesting. 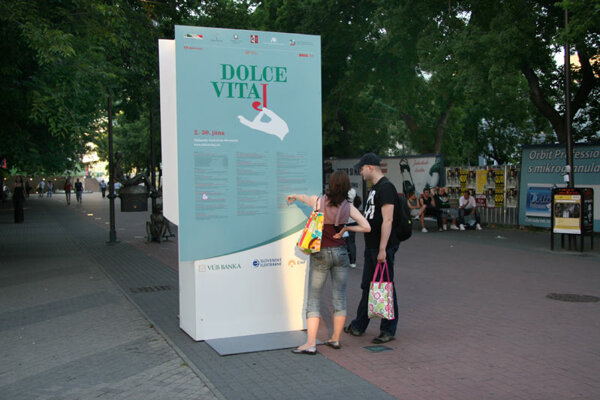 THERE is no need to introduce Italy to Slovaks, who flock to its historical sites and beaches over the summer holidays. Slovaks also know Italy as the native country of world-class painters, sculptors, and musicians, as well as a country with a rich cinematography. Of course, Italian cuisine is another phenomenon beloved in Slovakia. And, most recently, the arrival of Italian investors has made this country and its language even more interesting.

“Italian film, music and cuisine are the most interesting areas for Slovaks,” Marco Gerbi from the Italian Cultural Institute in Bratislava told The Slovak Spectator.

The institute is the main organisation bringing Italian culture and language to Slovakia. In 1999, the institute resumed its operation in Slovakia after an almost 50-year absence. Now, it is one of 90 Italian cultural institutes operating around the world, with a mandate to establish the relationships necessary to promote and integrate Italian artists and cultural institutions in the international exchange and production of culture.

In Slovakia, the institute holds language courses for students with various levels of knowledge and supports the teaching of Italian. About 500 people attend Italian lectures at the institute each year.

“The arrival of Italian investors enormously increased interest in studying Italian,” said Gerbi. “In the past, people wanted to learn languages to travel, to get know new countries and cultures. Of course, opera singers also studied Italian. But now the focus is on business. People study to extend their job opportunities.

"In Slovakia, there are a number of Italian investors who need workers who speak Italian. These are Enel, which controls Slovenské Elektrárne, UniCredit Bank and VÚB bank, which is owned by Intesa. So a lot of companies are sending their employees to Italian courses to learn or improve their Italian.”

This year the institute joined with the Italian Embassy, the Italian Office for Foreign Trade and others to organise the Dolce Vitaj festival. The name of the festival is a play on words. Adding the “j” to the Italian phrase "Dolce Vita" ("the sweet life") turns it into an Italian-Slovak phrase which can be translated as “sweetly welcomed”.

“The festival was successful and there are plans to repeat it next year,” Gerbi told The Slovak Spectator.

Of the individual events, Gerbi highlighted the Italian Night, which provided an overview of Italian history, culture and gastronomy.

“Jozef Bednárik, who directed the whole event, was a guarantee of an interesting and amusing evening,“ said Gerbi. “It is a pity that there were only two nights.“

One of the festival displays, titled Gardens in Tuscany, was composed of large, colourful photographs by Massimo Listri depicting the most important historical gardens in the region of Tuscany. The Bratislava City Gallery hosted a display of sculptures, reliefs and drawings by Umberto Mastroianni, one of the most important artists of the 20th century. Italian Lights is a significant contribution to the current edition of the international presentation of contemporary art, Sculpture and Object.

“Cinematography is another part of Italian culture that is very popular in Slovakia,” said Gerbi. During the Dolce Vitaj festival, visitors could familiarise themselves with modern Italian cinematography at the mini-festival called Italian Stories, which took place June 7 and 8. And Italian films have become an inseparable part of Artfilm in Trenčianske Teplice and the international film festival held every winter in Bratislava. Last year, the Italian Cultural Institutions of the region (in Budapest, Vienna, Krakow, Prague, and Bratislava) organised a travelling film festival, Mittel Cinema Fest – Festival Centro-Europeo del Cinema Italiano, focusing on the newest Italian films.

One day of the festival was dedicated to the 150th anniversary of the birthday of
Giacomo Puccini. Italian soprano Angela Papale, accompanied by Fabio Marra on piano, sang the most popular arias by Puccini and his contemporaries on June 10.

“The Opera of the Slovak National Theatre has four of Puccini’s operas in repertoire: Madama Butterfly, Tosca, La Bohéme, and Turandot,” Zuzana Golianová, the SND pressperson, told The Slovak Spectator. “All of them are very popular.“

The festival did not neglect the delights of Italian food. Under the title Italy on the Plate, Italian restaurants from the Association of Italian Restaurants in Slovakia prepared a special menu to introduce the traditional cuisines of individual Italian regions. Bratislavans were also able to taste Italian meals and specialties in the courtyard of the Old Town during the last weekend in June.

The Italian Cultural Institute regularly organises demonstrations of Italian cooking, where chefs teach Slovak audiences how to cook traditional Italian meals and allow them to sample the results. So far this year, due to their popularity, the Institute has organised six to seven such evenings and plans to schedule more.

“Usually a concert of prominent Italian artists opens this festival of language and culture,” said Gerbi. “Then there are lectures, discussions, film screenings and programmes prepared by schools at which Italian is taught.”

On September 17, an exhibition of paintings by Sandro Trotti, a world-renowned Italian painter, will open in the GOZA gallery in Bratislava. On display will be 25 works, including landscapes, portraits and nudes representing individual periods of his career. The display of Trotti, who is also called the ambassador of Italian art in China, since he is revered in that country, will continue to the end of October.

In mid-September the gallery of the Italian Cultural Institute will open Trasformazioni, a collective exhibition of Daniele Camaioni, Alessandro Grimaldi, and Massimiliano Orlandoni, three young artists from the Marche region. Their works, which combine digital photography with fine arts techniques, will remain on display until October 31.

One of the most successful projects organised by the Institute was the display of machines by Leonardo da Vinci at Bratislava Castle in 2006.

“The exhibition was very successful, with over 100,000 visitors, which far exceeded our expectations,“ said Gerbi.

While Slovaks admire Italian food, music, and film, Italians return the compliment by admiring Slovak folk architecture as exemplified by Vlkolínec, Čičmany, and Ždiar as well as Slovakia’s folk dance and music tradition.

“Folk dance and music continues to live in young people,” Gerbi told The Slovak Spectator. “This is visible at folk festivals, which are attended by youth.”