THE SLOVAK army should be better trained. But not to deal with the threat of terrorism, or help fulfil Slovakia’s obligations as a member of NATO. Instead, according to Ján Slota, leader of the Slovak National Party (SNS), a junior member of the governing coalition, better military training is needed in order to repel a threat from Hungary. 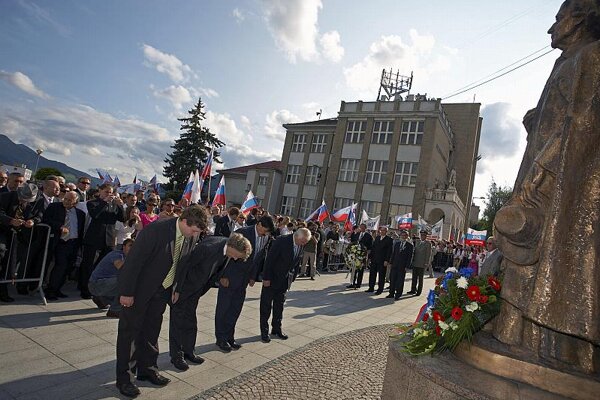 THE SLOVAK army should be better trained. But not to deal with the threat of terrorism, or help fulfil Slovakia’s obligations as a member of NATO. Instead, according to Ján Slota, leader of the Slovak National Party (SNS), a junior member of the governing coalition, better military training is needed in order to repel a threat from Hungary.

In a stark warning, he has stated that Slovakia’s neighbour represents a real danger. This despite the fact that both countries are members of the European Union, and of NATO, which means they are in theory pledged to defend each other in the event of aggression.

Slota issued his warning about Hungary at a meeting on August 17, in the central Slovak town of Ružomberok, organised to mark the 70th anniversary of the death of the Catholic priest and nationalist politician Andrej Hlinka.

“We have to train our army a little bit more so that we don’t let territory slip from our hands … the Greater-Hungarian chauvinism headed by Viktor Orbán [a Hungarian politician and former prime minister] has been arming and preparing to rob Slovakia of territory,” he told the hundreds who attended the meeting.

Slota accused Orbán of seeking to wrest southern part of the country, where almost 500,000 Hungarian-speakers live, from the rest of Slovakia.

“The real truth is that a second Kosovo in Central Europe has been prepared. And by the second Kosovo, [I mean] southern Slovakia,” Slota declared. “So let us come clean, Slovaks,” he added.

The meeting was organised by the SNS together with the Matica Slovenská, a cultural and educational institution, and the town of Ružomberok. The town’s mayor, Michal Slašťan, distanced himself from Slota’s comments. “Let us not make the Andrej Hlinka celebrations political,” he told the private TV channel Markíza on August 17.

However, he was the only attendee to publicly dissociate himself from Slota’s words. A spokesman for the Matica Slovenská, Ján Bajaník told the Sme daily on August 19 that Matica would not comment on statements by party leaders.

Slovak Prime Minister Robert Fico has also repeatedly warned about the dangers of an Orbán victory in the next Hungarian elections, planned for 2010. Orbán has expressed support for Hungarian minorities living outside the country’s borders.

In his speech, Slota also stressed Hlinka’s importance, saying he had always fought for Slovaks. He praised Hlinka for his resistance to what Slota described as both the tough Magyarisation policy before 1918 and the threat of Slovaks being absorbed during the first Czechoslovak republic. “He always managed to be well-oriented, he took the lead in order to show the way out.”

Slota has a long record of public anti-Hungarian statements.

Earlier in August, at celebrations to mark the Matica’s anniversary in Martin, he accused Hungarian leaders of being confused about their origins, saying “Nobody from their side wants to [admit] their homeland is probably the Gobi desert in Mongolia”.

In March 1999, at a HZDS party meeting, he called on Slovaks to take up arms against Hungary.“We will fight for our territory … for every square metre, and we will not give a square centimetre to those Hungarian bastards … we will take to our tanks and set out for Budapest!” Slota said.

Slota is currently the third most popular Slovak politician, with the support of more than 10 percent of respondents, according to a poll by the Institute for Opinion Polls at the Slovak Statistical Bureau conducted between August 1 and 7 among 1,247 citizens. Only the prime minister, with 32 percent, and President Ivan Gašparovič, with more than 17 percent, enjoy more support.


Hlinka founded a nationalist party bearing his name in 1918: Hlinka’s Slovak National Party, or HSĽS. A year after his death in 1938, his successor as party leader, Jozef Tiso, became president of the Slovak State, a fascist republic allied to Nazi Germany.

“We have had some very bad experiences with this in the past,” Kusý said. “It has always provoked some passions.”

Political analyst László Öllős told The Slovak Spectator that he considered the most serious fact to be that the prime minister has not distanced himself from Slota’s words. Öllős said it was astonishing that a top representative of the governing coalition of a NATO member state could accuse another NATO member state of preparing an attack against it. “From the diplomatic point of view, this is a grave statement, and remaining silent over it is grave too,” Öllős said.

According to Öllős, the SNS, the most radical party in the ruling coalition, regularly addresses similarly militant statements towards Hungary and Hungarians. “Whenever a scandal breaks out around the SNS, Slota tries to draw attention away from it with similar attacks,” Öllős explained.

“Without such offensive and radical statements, the SNS would not survive”, he added.

According to Öllős, there is no real threat to Slovakia from Hungary. But he considers Slota’s words dangerous for democracy in Slovakia. “Maintaining a sense of danger allows such people to gain powerful positions, people who then reduce democracy and use their powers – aside from weakening democracy and destroying democratic values – to create economic advantages which are at the edge of legality,” Öllős stressed.