ONE OF THE OLDEST continuously operating mints in the world is now carrying out a pretty high-profile task: producing new coins for Slovakia’s switch to the euro in January 2009. 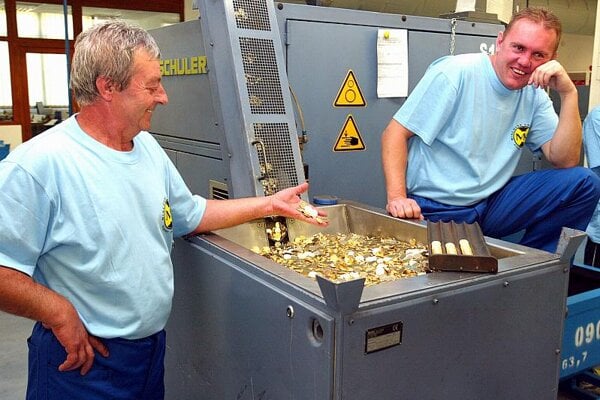 ONE OF THE OLDEST continuously operating mints in the world is now carrying out a pretty high-profile task: producing new coins for Slovakia’s switch to the euro in January 2009.

The mint is now to set to produce 500 million Slovak euro coins with a total face value of €167 million by December 15, a spokeswoman of the National Bank of Slovakia, Jana Kováčová, told the media.

The Kremnica Mint first started producing coins on 17 November 1328, when the Hungarian king, Charles Robert of Anjou, granted Kremnica the status of a royal free town and the privilege of operating a mint, according to the mint’s official website.

Having euro coins and notes of all nominal values ready is one of the conditions that Slovakia must fulfill in order to ensure a smooth switch to the European single currency. In addition to the coins being minted at Kremnica, the country will also need 188 million banknotes worth €7 billion.

Počiatek said he hopes that the new currency will serve Slovakia much longer than the present currency, the Slovak crown, which replaced Czechoslovak crowns in February 1993 after the Czechoslovak Federal Republic split in two.

The euro currency has eight coins, the obverse sides of which each country joining the eurozone is entitled to decorate with its own national symbols.

Slovaks were given the opportunity to vote for their motifs in a nationwide poll organised by the NBS in 2005 in which 140,653 citizens voted via the NBS website, by sending SMS text messages, or by making calls.

The national symbol of the Lorraine cross was the most popular, receiving 33,068 votes, followed by Kriváň peak with 24,589 votes. Bratislava Castle got 21,792 votes.

As a result, the obverse of the €1 and €2 coins will have a Lorraine cross on three hills while the €0.50, €0.20 and €0.10 coins will carry the image of Bratislava Castle. Kriváň peak will decorate the smallest euro coins, with nominal values of five euro cents, two euro cents and one euro cent.

Other motifs included Spiš Castle, Saints Cyril and Method, the Virgin’s Tower of Devín Castle, and the Biatec Celtic coin.

The Kriváň peak motif was created by Drahomír Zobek, who designed all the Slovak coins currently in circulation. Kriváň peak is the only existing motif to reappear on the euro coins.

Once the coins are ready, Slovaks will be able to purchase so-called euro starter packs.

All together there will be 1.2 million starter packs produced.

Sale of the packs will commence on December 1, 2008; people will be free to buy as many as they choose. Slovak Post and the NBS will be selling the packages for Sk500, Kováčová said.

The NBS consulted with banks over the number of starter packs to produce; they in turn communicated with their clients when making estimates.

“The value of the starter pack was set at a price which is easy to remember - Sk500 - however the value of the package is not exactly equal to Sk500: the difference might be Sk0.09,” Kováčová said. “Since one of the main principles of the euro switch is not to damage the citizen the NBS will cover the difference.”

With a total of 1.2 million packages, the NBS’s decision to make up the difference will cost it Sk108,000.

Other countries switching to the euro applied the same principle, added Kováčová.

When preparing the packages, the NBS consulted countries such as Slovenia, Malta and Cyprus which have adopted the euro over the past couple years and used their experiences of preparing for the new currency.

The NBS started withdrawing the estimated 450 million Slovak coins in circulation in late August. It aims to withdraw the majority of them in mid-January 2009.

The Austrian National Bank will lend euro banknotes to Slovakia’s central bank until sufficient banknotes are printed for Slovakia by one of the approved European presses.