THE SLOVAK flat water kayaking team finished second in the men’s 1,000-metre kayak four on August 22, to claim silver. It was the last medal that Slovak athletes won at the XXIX Olympic Games, which closed in Beijing on August 24. 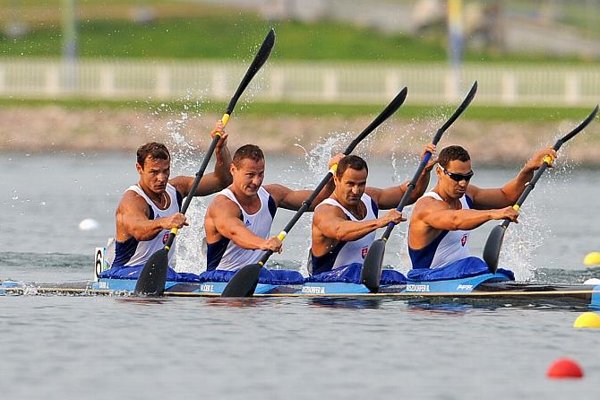 THE SLOVAK flat water kayaking team finished second in the men’s 1,000-metre kayak four on August 22, to claim silver. It was the last medal that Slovak athletes won at the XXIX Olympic Games, which closed in Beijing on August 24.

In total, Slovakia won three golds, two silvers and one bronze medal, the best result the country has achieved at an Olympics since independence in 1993.

The Slovak kayak crew of brothers Richard and Michal Riszdorfer, Erik Vlček and Juraj Tarr picked up its silver medal with a time of 2:56.593. The Belarusian team took gold with a time of 2:55.714 and Lutz Altepost, Norman Brockl, Torsten Eckbrett and Bjorn Goldschmidt of Germany took bronze with 2:56.676.

After the medal ceremony, the Slovaks had tears of disappointment in their eyes. They said they had trained hard and pinned their hopes on winning gold.

“At the end we were a bit angry that we failed to win,” Richard Riszdorfer told the SITA newswire after the race. “But the Belarusian crew was fantastic. We did all we could.”

The silver medal was a step up for the kayak quartet, which with all the same members except for Tarr, won bronze at the 2004 Summer Olympics in Athens.

Tarr has special reason to be thankful for the medal. More than 10 years ago, he was diagnosed with thyroid cancer.

“I’m very glad,” Tarr, 28, said after the race. “It will be 10 years since my recovery. Back then, I didn’t dare to believe something like this was possible. After Sydney [where in 2000 the Slovak crew, including Tarr, ended fourth] I was sure I wouldn’t win a medal. So I’m even happier now.”

The Slovak crew’s win was considered miraculous because Slovakia doesn’t have a flat water training track. The athletes train in Komárno, but the conditions there are not ideal because the track is not straight, SITA wrote. There are plans to build a channel in Bratislava, but not much progress has been made.

“It definitely puts us at a disadvantage,” Pavel Blaho, the flat water team’s coach, told SITA. “There is talk of billions of crowns for an ice-hockey stadium. We need much less.”

These bad training conditions may be one of the reasons why there are few athletes following in the footsteps of the country’s best flat water kayakers, Blaho said. This doesn’t bode well for the future of the sport in the country, he said, though he believes the recent silver-medal win could catch the attention of young athletes.

The final Olympic rankings by number of medals put Slovakia at 25th, just behind the Czech Republic. But when the medals are calculated on a per capita basis, Slovakia is ninth.

Though this performance at the Games is widely considered the country’s most successful since independence, some are taking the opportunity to voice concern.

“Our medal wins, including three golds, was very satisfying,” Vladimír Miller, head of the Slovak Olympic team, told SITA. “But it worries me that a large portion of the athletes who met the qualification criteria, and did not go to the Games only on the basis of an organisational decision, did not perform at their personal best.”

Slovakia achieved its goal of winning six medals, but fewer athletes than desired placed at least eighth in events.

Other Slovaks athletes for whom expectations were high also didn’t place very high.


“Specifically, we believed more of the flat water canoeists would advance to the finals,” Miller said. “Shooters also missed some of the finals very narrowly.”

Miller is not very optimistic about the future.

“One half of the top athletes in the 58-member Slovak team is older than 25,” he said. “It is a warning sign for the coming years, and we will have to deal with it. Outstanding talents are absent in many sports.”