PRIME Minister Robert Fico and his Hungarian counterpart, Ferenc Gyurcsány, met ahead of a European Union summit in Brussels on September 1 to discuss easing the tension between their countries that has forced them to postpone official visits several times in recent months. 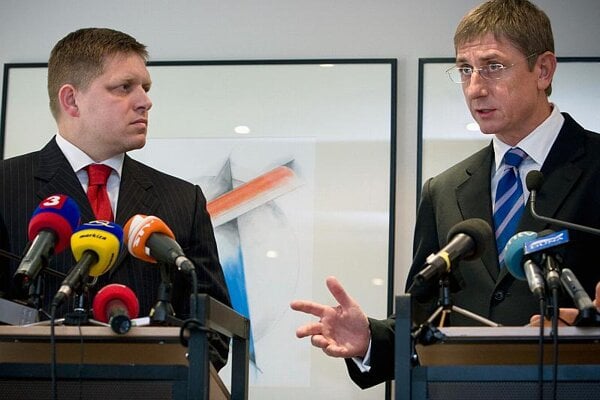 PRIME Minister Robert Fico and his Hungarian counterpart, Ferenc Gyurcsány, met ahead of a European Union summit in Brussels on September 1 to discuss easing the tension between their countries that has forced them to postpone official visits several times in recent months.

But on the same day, Ján Slota, the chairman of the Slovak National Party, planted a Lorraine Cross in Malacky, a town in western Slovakia, literally staking claim to territory that he claimed too often bears images of “turuls,” a falcon from Hungarian mythology, which he derided as a “parrot.”

Fico and Gyurcsány were unified in blaming the tension on radical politicians and groups on both sides. Gyurcsány said that the countries relate on two levels: the economic, which has been prosperous, and the political, which has been complicated by the anti-Hungarian sentiments of some Slovak politicians, especially Slota.

Gyurcsány declared that as long as such statements continued, a visit to Slovakia would be perceived as treason in Hungary.

“We understand perfectly well that the Slovak government has distanced itself from these statements,” Gyurcsány explained. “But they were uttered by a representative of the ruling coalition, and they offend our honour, dignity and position. Therefore, we cannot act as if nothing has happened.”

Fico responded that Slovakia is troubled by certain events in Hungary, namely the founding of the Hungarian Guard in 2007, a neo-fascist group that has been condemned across Europe for inciting extremism and anti-Semitism.

“It would be unfortunate if our relations suffered because of certain statements, or the behaviour of some people in Hungary who have not learned to contain themselves,” Fico said.

“The question is,” Fico continued, what is more dangerous: statements or the neo-fascist organisation that marches in Hungary.”

During his trip to Malacky, Slota called the Lorraine Cross a “symbol of Slovak statehood” and ridiculed the turul.

“Unfortunately, on our land, ugly birds, those Hungarian parrots, are more frequently seen,” Slota said, as quoted by the SITA newswire.

The next day, Slota defended his statements against Hungarians and maintained that Gyurcsány was using them as an excuse not to visit Slovakia.

Slota explained that one of his recent comments, in which he called Hungarian Foreign Affairs Minister Kinga Göncz a “lady with dishevelled hair” who should “pay more attention to her appearance,” wasn’t incendiary because it was true.

“I don’t consider it vulgar to say that someone appears stylishly uncombed – but rather the truth,” Slota said.

At a press conference after the summit in Brussels, Fico and Gyurcsány also debated the results of an opinion poll conducted this spring by the Slovak branch of the Open Society Fund (OSF).


The poll asked 955 students aged 14-15 to voice their overall opinion of the Hungarian minority in Slovakia.

The results showed that 36.7 percent of the students had a negative opinion, 38.3 percent were neutral, and only 25 percent had a positive opinion.

Gyurcsány cited the poll’s results as proof that anti-Hungarian statements were worsening relations.

“As long as Hungarians are the enemy, there will be problems,” Gyurcsány said.


But Fico cast doubt on the poll’s findings.

“If the poll was conducted by the OSF, then I believe it as much as I believe water in a basket,” he said. Moreover, he added, polls are “like women’s swimsuits – they hide what we all want to see.”

Grigorij Mesežnikov, president of the Institute for Public Affairs non-governmental think tank, told The Slovak Spectator that the poll was indeed conducted impartially.

“Opinion polls tend to reveal what otherwise would have remain hidden,” Mesežnikov said.


Mesežnikov focused on the positive aspects of the meeting in Brussels, and noted that Slovakia and Hungary are close allies.

“They are members of the EU and NATO,” he said. “They are neighbouring countries with a long history, and hundreds of years of co-existence.”

However, the Brussels meeting revealed that mistrust remains between the countries, Mesežnikov said, adding that relations could deteriorate further.

“More because of Slovakia, as we have a radical nationalist party in government,” he said.

Although the Hungarian Guard is a neo-fascist organisation, it is on the fringes of the Hungarian political landscape, Mesežnikov said. That is different from the SNS, which is a member of Slovakia’s governing coalition.

“This is a problem, but still not one that should prevent Slovak-Hungarian relations from developing,” he said. “It is being used as a pretext.”