THE NAYSAYERS in the property market, not to mention potential first-time buyers, may end up being disappointed in 2008. Though the record growth in prices for apartments has slowed since 2007 and early 2008, residential property prices across Slovakia continued to post steady growth in the second quarter of 2008. 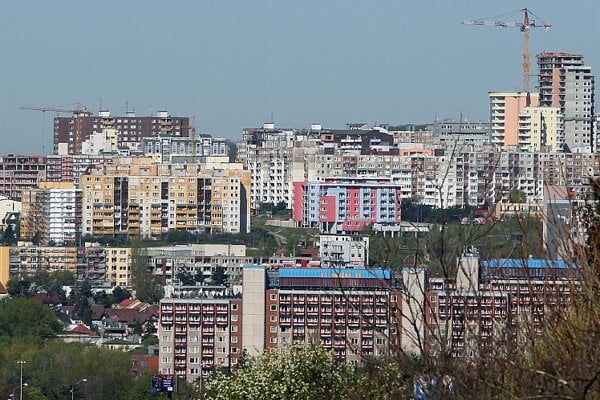 THE NAYSAYERS in the property market, not to mention potential first-time buyers, may end up being disappointed in 2008. Though the record growth in prices for apartments has slowed since 2007 and early 2008, residential property prices across Slovakia continued to post steady growth in the second quarter of 2008.

The traditional engines of growth for residential property prices remain the larger cities: Bratislava, Košice and Banská Bystrica. However, the regions - in particular those that have become home to large foreign investments - are catching up too.

Market watchers are sticking with earlier predictions that the prices for older apartments, especially in concrete blocks of flats, a legacy of socialist housing schemes, will fall - but not by much.

In the second quarter of 2008, residential prices grew by 31.2 percent year-on-year, reaching an average of Sk46,658 per square metre. In the first quarter, growth stood at 34.5 percent year-on-year, according to data from the National Bank of Slovakia, which monitors real estate prices in Slovakia quarterly. The central bank processes the data in cooperation with the National Association of Real Estate Agencies (NARKS).

The average price for apartments and houses sold last year stood at Sk37,306 per square. Compared to 2002, when buyers paid Sk17,832 per square metre, prices in the second quarter of 2008 represent a 161.7 percent increase, the NBS data shows.

The slowdown of prices in the second quarter of 2008 has not surprised business, but real estate professionals remain cautious.

Andrej Churý, director of the real estate company RE/MAX Elite said that price growth was being fuelled by demand continuing to outstrip supply in the market.

“The current slowdown is a result, among other things, of an increase in supply thanks to the growing number of investors in the segment,” Churý told The Slovak Spectator.

The chairwoman of the Association of Realty Brokers, Daniela Danihel Rážová, said she had expected the slowdown in price growth. She sees the euro-switch scheduled for January 1, 2009, as having a mixed effect on the real estate market as well.

“Sellers raised prices for real estate in anticipation of euro adoption, but they didn’t anticipate that buyers would not be willing to pay the higher prices,” Rážová told The Slovak Spectator.

The situation in the mortgage market has also contributed to the slowdown since banks are now less willing to take on the risk of an eventual drop in the value of over-priced real estate used as collateral, she said.

Though, the prices of older apartments have been dropping, one can still find good and bad prices on the market, according to Rážová.

Churý said that the steepest surge in residential prices was in Bratislava and Košice Regions.

Regarding different apartment types, Rážová said the market is becoming filled with expensive new apartments and many might have problems selling. This is one of the reasons why prices for new apartments, apart from in a few select locations, have not climbed so steeply, Rážová added.

The price of newly built real estate depends on its location, the project itself, the price of the land, construction works and materials, the quality of the project, etc. However, according to Rážová the problem is that there are not enough newly built mid and higher standard apartments on offer at an acceptable price.

Real estate professionals agree that the profile of clients remains pretty much the same, with middle-income families who can afford to pay back mortgages out of their salaries being the key apartment buyers.

While Churý has not noted a significant change in the level of interest from foreigners in Slovak real estate, Rážová believes that British and Irish clients, who have made up a significant group of buyers in Slovakia, have been gradually disappearing from the market.

“This development is connected to the sub-prime mortgage crisis in the United States and Great Britain but also because the market does not currently have properties to attract these clients,” Rážová told The Slovak Spectator. “These clients are interested in buying real estate in order to make a profit either through an increase in value or through good rental returns.”

According to Rážová, a smaller clientele is still showing an interest in newly built houses in the city centre and apartment housing at ski resorts.

However, Russian clients are an interesting group entering the market now, she added.