'Hanishar' captures stories of the Holocaust

HANISHAR is a Hebrew word that means “what remains”. It is also the title of a project about the Jewish community in Slovakia, which is still reeling from the devastation of the Holocaust. The project encompasses a photo exhibition by famed Slovak-born Canadian photographer Yuri Dojc and a documentary about Holocaust survivors in Slovakia inspired by his photographs. 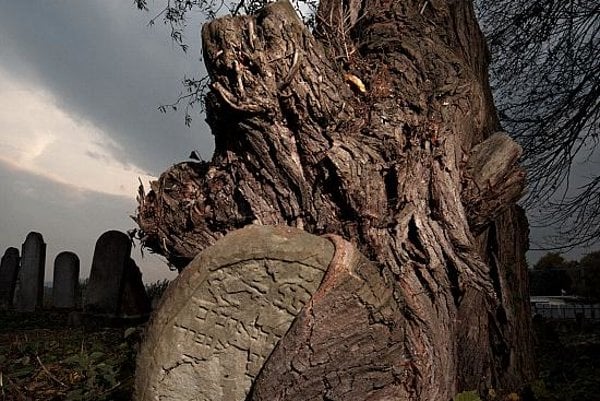 HANISHAR is a Hebrew word that means “what remains”. It is also the title of a project about the Jewish community in Slovakia, which is still reeling from the devastation of the Holocaust. The project encompasses a photo exhibition by famed Slovak-born Canadian photographer Yuri Dojc and a documentary about Holocaust survivors in Slovakia inspired by his photographs.

The exhibition, entitled People, Fragments, Cemeteries, opened in Bratislava on September 9 to coincide with Holocaust Remembrance Day, when Slovakia reflects on all victims of hate crimes.


As well as black-and-white photographs of the survivors, it includes colour photomurals on canvas that incorporate fragments from cemeteries, books, and synagogues.

Dojc emigrated from Bratislava to Toronto in 1968, after the Russian invasion of Czechoslovakia, and has since become one of Canada’s most celebrated photographers. He has published several books of nude portraits and also does commercial photography.

“I always consider where the beauty lies,” Dojc explained to The Slovak Spectator. “Certainly it can be found in the things or people I portrayed in this project.”

He made the documentary with Katya Krausová, a British producer and journalist who also fled from Czechoslovakia, to London, in 1968.

She met Dojc in the spring of 2005, and they’ve been recording what remains of Slovakia’s Jewish community ever since.

September 9 became Holocaust Remembrance Day in Slovakia through an act of parliament in 2001. The law was introduced by former opposition politician, and current prime minister, Robert Fico.


September 9 was chosen because it was on that date in 1941 that the wartime Slovak state, which was a satellite of Nazi Germany, approved its Jewish Code, which, according to historians, was among the harshest anti-Semitic measures in Europe.

The Code forbade Jews from participating in even the simplest aspects of everyday life, from owning a bicycle to walking in parks, and stripped them of their property. Within a year, tens of thousands of Slovak Jews were deported to concentration camps. More than 70,000 never returned.

Dojc said his photographs address the tragedy, but that his main goal was to reveal the beauty hidden within.

“I refuse to wear the coat of a victim,” Dojc told The Slovak Spectator. “For me, it was about discovering beauty in something that was destroyed.”

Dojc and Krausová speak openly about their Jewish roots. In fact, Dojc’s family spent much of the war hiding in the village of Uhrovské Podhradie. They fled as the Germans approached, running through streams so that dogs wouldn’t be able to track them.

Both have said that their research into the Jewish community in Slovakia has revealed traces of their own ancestors, whom they knew little about until now.

Dojc's photographs of Holocaust survivors began with a picture of his 87-year-old father, Ľudovít Dojč, a famous historian who wrote several books about the country’s Jewish history.

In 1997, Dojc was seated next to his father in the kitchen when he asked, “Isn’t it Hanukkah?” His father nodded, and brought a menorah.

“An air of peace surrounded him as he sat motionlessly near the menorah, so I took a picture,” he said. “And when I was leaving, he asked me to take care of my mother.”

Two weeks later, his father died. At the funeral, Dojc met Ružena Vajnorská, a Holocaust survivor who shared her experiences at Auschwitz. Dojc was so intrigued that he spent the whole afternoon with her and accompanied her on visits to other Holocaust survivors. It was around then that he decided to use photographs to document the survivors’ lives and stories. He took 150 portraits in all.

One of the pictures is of three massive, old books lying on a shelf, with several papers sticking out of them. One of the papers contained a Hebrew inscription which Dojc couldn’t understand. He showed the picture of the inscription to a Hebrew speaker, who smiled, and said the meaning was quite a coincidence. When Dojc enquired further, the man explained, “It says ‘hanishar’”.

In 2005, Dojc displayed the pictures at a meeting of over 300 people who had fled Czechoslovakia in 1968. Katya Krausová, a film producer and journalist, recalled her response to them.

“I happened to turn to where the portraits were being screened, and I started crying,” she told The Slovak Spectator.

She immediately approached Dojc and persuaded him to make a documentary about the survivors.

Dojc and Krausová began filming six months later. But of the 150 people he had photographed, only about 30 were still alive. Now two years into making the documentary, they have included the testimony of six more survivors, who share stories of incredible detail.

But neither has any intention of stopping there. They are sure that there is still someone with memories that deserve preservation through film.

“There will never be enough of this, and every story, every person should be documented,” Krausová told The Slovak Spectator.

Dojc and Krausová found an abandoned Jewish cemetery in the village of Kurima, near Bardejov, in eastern Slovakia. While walking through it, they noticed plastic roses on one of the graves, which they said is completely at odds with Jewish tradition. Down the road there was a Roma settlement, where they met an elderly Roma man. When they asked whether there were any Jews in the village, he answered, “No, because I recently buried the last living Jew. He had nobody to bury him, no relatives left, so I did it.”

The Roma man revealed that he had made the plastic roses and placed them on the gravestone.

“I didn’t know what a Jewish funeral should be like,” he said apologetically.

The Roma man told Dojc and Krausová that he had also suffered during the Holocaust. Just eight years old at the time, his whole family was rounded up and deported to Auschwitz, but he managed to escape and hide.

When Dojc and Krausová went to Uhrovské Podhradie, they met a 90-year-old blind woman who said she remembered Dojc’s mother. In the same village, a man in his sixties came to tell them that his mother was helped by a Jewish doctor. She was pregnant during the war, and suffered complications during the delivery. The residents knew that Jews were hiding in the mountains near their village, so one of them went to ask if anyone hiding was a doctor.

Fortunately, one of them was, and he left his hideout to help with the birth.

“Everywhere we went, people welcomed us and said they were happy to tell their stories,” Krausová said. “They had feared nobody would come and listen.”

Dojc’s exhibition will also be shown in New York, London, and Amsterdam. But he doesn't intend to give up photographing nude portraits. In fact, a display of his nude portraits is showing in Košice after moving there from Prague.

“Everyone has to find their style, and this is mine,” Dojc said. “It is all thanks to this project, Hanishar.”