ON SEPTEMBER 6, Bratislava went back in time to the 17th century. The city centre filled with hundreds of people who watched a procession led by an actor portraying King Ferdinand II of Habsburg, who was originally crowned on July 1, 1618. 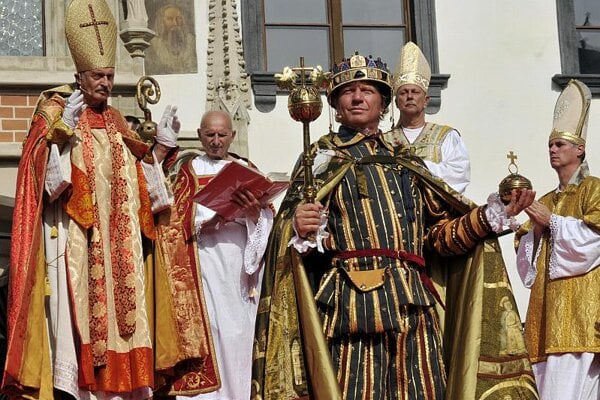 ON SEPTEMBER 6, Bratislava went back in time to the 17th century. The city centre filled with hundreds of people who watched a procession led by an actor portraying King Ferdinand II of Habsburg, who was originally crowned on July 1, 1618.

The coronation came complete with period costumes, drummers, soldiers with historical weapons and a festive mood, the ČTK newswire wrote.

This was the sixth consecutive coronation re-enacted in Bratislava. King Ferdinand was played by actor Maroš Kramár. The procession was joined by soccer fans from Northern Ireland who came to support their team in a match that evening. As well as the coronation itself , which took place in the Main Square, the "emperor" made a coronation vow in nearby Hviezdoslavovo Square. With a sword in his hand, he pledged to his “subjects” that he would do all he could for the common welfare of the people.

But history shows that Ferdinand II’s reign is mainly associated with turbulent years of war and religious conflict. As a Catholic monarch, he played a large role in the Thirty Years’ War, in which he battled Protestant countries. He was also responsible for suppressing the rebellion of the Czech Estates, and a famous mass execution in Prague that took the life of Jan Jesenius, the chancellor of Prague’s Charles University.

“We were looking for a way to show Bratislava inhabitants what was interesting about Ferdinand II,” Miroslav Vetrík of the Korunovačná Bratislava civic association told the ČTK newswire. “So we prepared an outline of battle techniques from the Thirty Years’ War, and we demonstrated what the execution in Prague’s Old Town looked like.”

Bratislava became the imperial coronation capital after the Ottomans won the Battle of Mohács, which placed a large part of the Great Hungarian Empire under Ottoman control.

The last coronation of a Hungarian king in Bratislava occurred in 1830, although Budin, the capital of the Great Hungarian Empire, was liberated from Ottoman rule as early as 1686.