AT a press conference following the recent summit between the presidents of the Visegrad Four (V4) countries, Hungarian President László Sólyom declared that his country’s relations with Slovakia had been spoiled by the nationalist rhetoric of one particular member of Slovakia’s governing coalition. 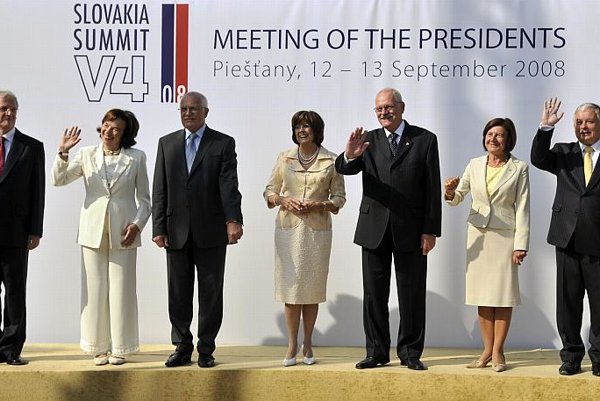 AT a press conference following the recent summit between the presidents of the Visegrad Four (V4) countries, Hungarian President László Sólyom declared that his country’s relations with Slovakia had been spoiled by the nationalist rhetoric of one particular member of Slovakia’s governing coalition.

“We are concerned about the statements made by SNS (Slovak National Party) chairman Ján Slota, who repeatedly offends the local Hungarian minority and Hungary, and spoils the atmosphere of our common work,” Sólyom said, as quoted by Czech public television on September 13.

Sólyom raised the topic of Slovak-Hungarian relations even though it was not officially on the agenda at the summit, which took place in Piešťany from September 12–13. The other participating heads of state were Slovak President Ivan Gašparovič, Czech President Václav Klaus, and Polish President Lech Kaczynski.

He acknowledged that the countries clash occasionally, but stated that there were no problems facing mutual relations.

“Certain questions and issues resurface at negotiations,” Gašparovič said. “But these problems are on a level that cannot obstruct our relations.”

Sólyom agreed that Slovak-Hungarian relations are good on the regional level. He said that villages and towns in border regions successfully share European Union resources and enjoy free movement of labour. The ministries and presidents of both countries have good relations as well, he said.

“But despite these positive developments, there are things that give us a reason to believe that there are problems,” Sólyom stated.

Specifically, he criticised the Slovak government for not condemning Slota’s anti-Hungarian statements. Instead, the coalition shirks responsibility by saying it is solely the opinion of one of its parties, he said.

Sólyom cited a recent poll that found that more than one third of Slovak students have a negative opinion of the country’s Hungarian minority and want them to “go back across the Danube”.

This could have been avoided, according to Sólyom, if such a high-ranking politician were not as virulently anti-Hungarian.

Sólyom added that he would be very happy if the situation changed.

Gašparovič agreed that statements have been made that both the Hungarian and Slovak governments dispute. But he argued that those statements had been provoked by journalists.

“I don’t accept opinions that imply that animosity has developed in Slovak-Hungarian relations, or between their citizens, naturally,” Gašparovič said.

But Grigorij Mesežnikov, president of the Institute for Public Affairs (IVO) think-tank, disagrees.

Mesežnikov believes that Slovak-Hungarian relations are unique in the European Union. At the root of the tension is the fact that the SNS is a coalition partner, and that tension is aggravated each time Slota or other SNS members say something provocative, he said.

“Slovakia and Hungary's entire dynamic definitely doesn’t conform with the formal character of their relations,” Mesežnikov said. “Unfortunately, the relations are far from how allies and partners in the EU and NATO should act.”

But Mesežnikov disagrees with that as well.

The Visegrad nations cooperate on regional concerns, not bilateral relations among their countries, which until now had never been an issue, Mesežnikov said.

“Unfortunately, the tension between Hungary and Slovakia is indeed serious,” Mesežnikov added.

Political analyst Miroslav Kusý expressed a similar opinion to The Slovak Spectator.
He argued that the V4 summit and any statement or agreements that emerge from it have little importance given the presidents’ limited powers in these countries.

Sólyom sees the situation in a sober way, according to Kusý.

“In my opinion, it is Slota who worsens tensions, but also the Smer party, as it gives Slota a green light,” he told The Slovak Spectator. “Or, Fico tells Slota that he is of a different opinion and that’s it. Of course, this doesn’t solve the problem. Fico doesn’t do anything to enforce discipline among his partners.”

Like the political analysts, Slota believes that Slovak-Hungarian relations have reached a low point.

“Everybody smiles, everybody pats each other on the back, but at the end of the day, everybody feels that relations between Hungary and Slovakia have frozen,” Slota said, as quoted by the SITA newswire on September 14.

He continued, “Hungarians are playing the Hungarian card in Slovakia as part of their political ambitions before their parliamentary elections.”

Other topics discussed at the summit included the recent conflict between Russia and Georgia. The presidents did not agree enough on who was responsible for it to issue a joint statement, but they did agree that countries should resolve their disputes peacefully. They also discussed EU enlargement, particularly Croatia’s bid to join the union.

The presidents convene their annual summit in a different city in one of the V4 countries. Last year, they met in Hungary. Next year, they will meet in the Polish spa town of Sopot.

What is now known as the V4 Group was originally called the Visegrad Three. It expanded after the Czecho-Slovak Federal Republic split in 1993.

The name originated from a meeting between the countries' presidents at that time on February 15, 1991, in the north Hungarian town of Visegrad.