THE RESIDENTS of Pezinok haven’t given up on protesting against the construction of a waste dump near their town’s centre. 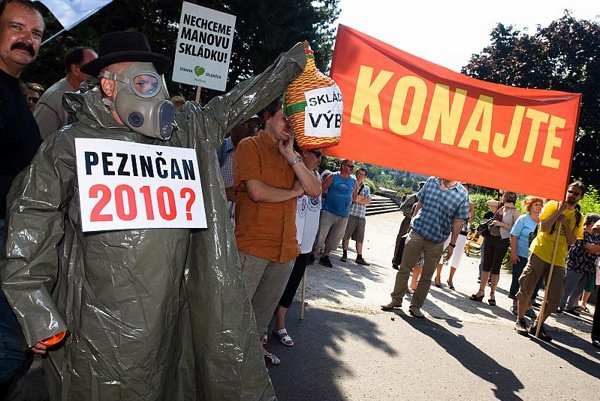 THE RESIDENTS of Pezinok haven’t given up on protesting against the construction of a waste dump near their town’s centre.

They are furious that the Slovak Environmental Inspection approved the construction several weeks ago even though the dump was banned in the town’s master plan. They also point out that the Regional Construction Office in Bratislava, which has also given the go-ahead on the dump, is led by Ján Man, who owns the land where the dump is to be constructed.

The residents’ fifth demonstration, which took place on September 10, was attended by more than 4,000 people. Many of them signed a petition addressed to Prime Minister Robert Fico that asked him to enforce the law. The petition will also be sent to European Union institutions.

Representatives from other towns and villages joined the protest as well in solidarity with the residents of Pezinok. This included officials from Bratislava’s Devín district, who are in the midst of a tug-of-war with a real estate developer, and officials from Trebišov, who oppose a planned thermal power station.

The demonstration included speeches by representatives from the Skládka do mesta nepatrí (Waste Dumps Don’t Belong in Towns) civic association and performances by famous singers Jana Kirschner and Peter Cmorík.

Pezinok Mayor Oliver Solga told The Slovak Spectator that the demonstration was meant to draw attention to the fact that the residents’ rights had been violated.

“Our right to a sound environment was violated by the public authorities that allowed this waste dump,” Solga stated.

In their message to the prime minister, the residents emphasised that their will had been blatantly ignored.

“Authorities are violating not only laws, but the basic principles of democracy,” the petition states. It continues, “A legitimate question arises – who really rules in this country, and which values are preferred?”

Pezinok’s inhabitants are trying to drive home the idea that the waste dump was approved by people with an interest in seeing it created. They cite the fact that Regional Construction Office head Ján Man, Jr., a Smer appointee, owns the plot under the dump and is the son of Ján Man, Sr., who requested the permission to build it.

“An unethical and unlawful connection between a businessman and a public authority led to the abuse of the role that public servants are supposed to perform: protecting the health, environment and will of citizens,” the petition reads.

But Marián Kočner, a representative of Westminster Brothers, the current investor in the Pezinok waste dump, isn’t backing down either. In an interview with the Slovak Radio on September 10, he repeated the same opinion that he recently shared with The Slovak Spectator.

This August, Kočner told The Slovak Spectator: “Someone is exploiting the residents. It will take some time before they realise it, but eventually they will.”

He added that if the waste dump isn’t built at the planned site, Bratislava’s Transport and Waste Disposal (OLO) company won’t have a place to dump the remains of incinerated waste.

“It isn’t true that OLO intends to deposit at the newly built Pezinok dump,” she said. “OLO has never been addressed by anyone in connection with this.”

Furthermore, Zuzana Čaputová of Waste Dumps Don’t Belong in Towns also disputed Kočner’s claims. She told The Slovak Spectator that she opposed the construction of the dump based on her convictions.

“As a mother of two, it doesn’t make sense to run even if only a potential risk from another waste dump, especially one as big as eleven and a half football pitches put together,” Čaputová explained.

Čaputová noted that some residents had already filed a suit at the Regional Court in Bratislava, in which they’re seeking an injunction to stop the construction until the merits of the case can be decided. The residents have also filed a request asking the Environment Ministry to investigate, she said.

“The petition we are sending to the European Parliament will continue until the grape harvest festivities in Pezinok [at the end of September],” Čaputová said.

Mayor Solga added that the grape harvest festivities attract almost 200,000 people to Pezinok each year, and that he expects many of them to sign the petition addressing the European Parliament.


The controversy over the waste dump in Pezinok has been dragging on for five years. Solga explained to the SITA newswire that Pezinok had a waste dump, the so-called Old Pit (Stará jama), which was closed last year. So the town planned to build another.

In 1996, the Old Pit was privatised and the Pezinok brickworks factory began dumping more of its waste there, increasing the dump’s capacity to 65,000 tonnes annually.

According to Čaputová, the Old Pit remains a problem for Pezinok.

“The Old Pit is an enormous environmental burden with millions of tonnes of waste, including a dangerous kind, without a sealing off, draining, or degasifying system,” Čaputová told The Slovak Spectator.