PÁL CSÁKY, chairman of the Hungarian Coalition Party (SMK), has caused an uproar by mentioning the prospect of autonomy for southern Slovakia at a meeting with Romanian MEP László Tőkés on September 27. 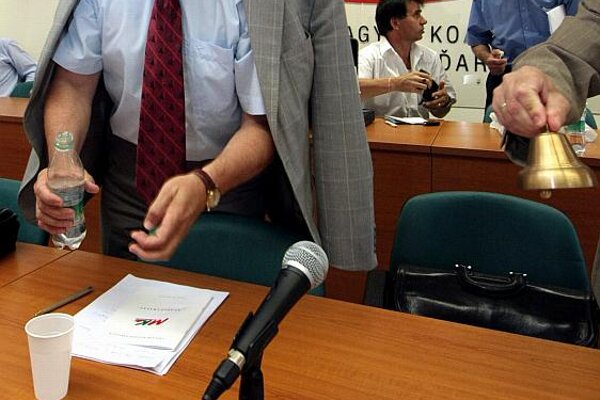 PÁL CSÁKY, chairman of the Hungarian Coalition Party (SMK), has caused an uproar by mentioning the prospect of autonomy for southern Slovakia at a meeting with Romanian MEP László Tőkés on September 27.

But one political analyst says a debate about autonomy for southern Slovakia is completely legitimate. Slovak Radio and the Sme daily reported on September 29 that Csáky made the comment during a meeting with Tőkés in Dunajská Streda.

According to the media, Csáky told Tőkés about a plan he had drafted while deputy prime minister under Mikuláš Dzurinda from 2002 to 2006.

The plan calls for a minority parliament in southern Slovakia that would decide on funding for cultural and educational institutions that benefit the Hungarian minority.

“The point of the meeting was to explain what we understand under as autonomy,” Csáky told Slovak Radio in Hungarian.

Tőkés is the chairman and founder of the Council for the Autonomy of the Carpathian Basin. The SMK is currently just an observer at the Council but will vote soon on whether to apply for full membership.

At a press conference on September 29, Prime Minister Robert Fico called on Csáky to "stop harming Slovakia and Slovak-Hungarian relations". He also mentioned that Csáky had told foreign media that he feared for his safety in Slovakia.

Fico blamed the comments on what he called the SMK's isolation, internal rifts and lack of an agenda.

“There is no doubt that the biggest threat to Slovak-Hungarian relations is the SMK chairman and his extremist leadership,” Fico said.

Anna Belousovová, vice-chairman of the Slovak National Party (SNS), had a very similar reaction.
“Csáky has clearly revealed his cards and the policy of the SMK, which is chauvinism,” Belousovová said at a press conference.

Csáky's comment comes a little more than a week after SNS chairman Ján Slota proposed that Slovakia create militias to guard against those recently formed by right–wing groups in Hungary.

“I feel threatened by the political situation there,” Slota said. "It's very easy to imagine the bridges being crossed by troops heading from (from Hungary to Slovakia),” Slota told a press conference.

Fico has rejected the idea of creating militias, but has defended Slota.

"He is following the coalition's platform, which clearly maintains the status quo in relation to ethnic minorities,” Fico told media on September 29.

Any speculation on autonomy for Hungarians in Slovakia is unacceptable, according to KDH chairman Pavol Hrušovský. He said Csáky’s statements complicate the cooperation between SMK and other opposition parties.

“The KDH will refuse to cooperate with Pál Csáky if he does not stop radicalising Slovak politics,” Hrušovský at a press conference on September 30.

“What Csáky said is ridiculous and stupid," he inveighed. "Nobody in Slovakia will be a party to it."

Former SMK chairman Béla Bugár denied that autonomy is part of the SMK's agenda. Even the SMK's vice-chairmen said they didn't know why Csáky had brought up the topic.

But Bugár also criticised the KDH and SDKÚ, saying that they were exploiting Csáky's comment as an excuse not to cooperate with the SMK.

“One must see that solving issues affecting minorities has become a kind of a burden for Slovak parties,” Bugár told The Slovak Spectator.

He also mentioned that the Dzurinda governments from 1998 to 2006 addressed many issues facing minorities.

“At least anti-minority opinions remained on the fringe," he said. "They didn't come from the governmental level, nor the parliamentary level."

“But now, when we are no longer in power, he added, "I haven't heard Dzurinda or Hrušovský say anything against Slota’s statements attacking Hungarians.”

Martin Krajčovič, a KDH spokesman, told The Slovak Spectator that the KDH has always been critical of any statements that escalate tensions or divide society.

“Slota only provokes with his statements, but Csáky is proposing a dangerous solution,” Krajčovič said.

But political analyst Miroslav Kusý told The Slovak Spectator that he believes a discussion about autonomy is justified.

“Autonomy is a fully legitimate tool in politics,” he said.

He added that half of Europe has autonomous regions that work and exist successfully. He cited southern Tirol, in Austria, and Finland as examples.

“But I do not mean by this that autonomy is the best option for Slovakia," he said. "That would be a last resort."

But if the SMK is pushed to the political fringe, as is happening now, Kusý said, ethnic tension will be fomented and there could be no other solution than autonomy.

Kusý emphasised that the constitution does not prohibit autonomy.

“The only point that the coalition and opposition is able to agree on is Hungarians, or, rather, anti-Hungarianism."

He added, “There is an idea here (in Slovakia) that playing the Hungarian card helps get votes.”

Kusý continued that the basic solution to the topic of autonomy is to discuss it openly.
“Fico and Hrušovský's statements come across as hysterical cries,” he said.

Such statements worsen ethnic relations and fracture the already divided opposition, Kusý said.
“This is a bad situation which cannot end well,” he warned.

Political analyst Péter Hunčík agrees that the KDH and SDKÚ should have reacted to Slota's anti-Hungarian statements in a similarly swift and condemnatory fashion.

“Just looking at it from the point of view of solidarity,” Hunčík told The Slovak Spectator, “this paints a very sad picture of the state of the opposition.”