A MYSTERIOUS epidemic struck the city of Nitra last week, characterised by large gatherings in dark auditoriums and frequent outbursts of applause. Sufferers had an unusual appetite for coffee and were always begging for something they called “the tickets”. The strangest fact: the Divadelná Nitra (DN) theatre festival coincided with the most serious stages of the disease. 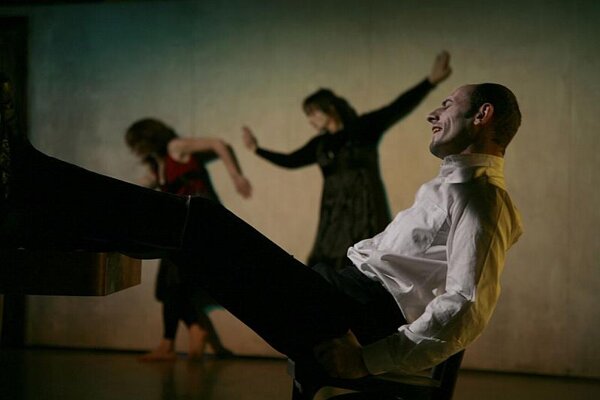 A MYSTERIOUS epidemic struck the city of Nitra last week, characterised by large gatherings in dark auditoriums and frequent outbursts of applause. Sufferers had an unusual appetite for coffee and were always begging for something they called “the tickets”. The strangest fact: the Divadelná Nitra (DN) theatre festival coincided with the most serious stages of the disease.

From September 26 to October 1, the usually calm streets swarmed with hundreds of people and it was almost impossible to find a free table in the town’s numerous pubs after 20:00. The words “Divadelná Nitra” were being pronounced with English, Russian, Dutch, Hungarian, Greek, Italian and many other accents and one would be asked 30 times a day how to get to the Andrej Bagar Theatre, the focal point of the festival.
“As many as 52 foreign guests and 13 foreign journalists accompanied by countless crews came to Nitra this year,” said Monika Ondrejovičová, PR manager of the event. “Attendance was spectacular; the majority of tickets were sold out immediately after the ticket offices opened. We are extremely satisfied with the run of the whole festival.”
The first festival evening was, as is traditional, dedicated to the Dosky Awards ceremony. Forty theatre critics, scientists and cultural publicists had chosen the winners in a previous poll, which honoured Canto Hondo, Deep Song about Her by the ElleDanse Alternative Theatre from Bratislava with the Award for Best Production of the Season 2007/2008. Its two directors, Šárka Ondrišová and Kamil Žiška, were also awarded Best Directors. The Dosky Award for Best Actress and Best Actor went to Daniela Kuffelová from the Andrej Bagar Theatre in Nitra and Robert Roth from the Slovak National Theatre in Bratislava.
Though the award night maintained a professional character, Ondrejovičová said that Divadelná Nitra was by no means the privilege of an “enclosed professional community”.
“Our ambition has always been to involve the broader public in the event,” she observed, adding that, as far as attendance was concerned, Slovak, Czech and Hungarian performances were most popular with the locals. “The average Slovak spectators are still not completely used to attending foreign-language performances, even though we always provide them with subtitles.”
This interest in “domestic theatre” was obvious also in a lively discussion incited by Tomorrow There Will Be..., an opera by the Czech National Theatre in Prague. This “musical story,” as the authors call it, was inspired by the 1950s political trial of Milada Horáková. The fact that the piece features Soňa Červená, a legendary opera diva who herself had to live in exile and lost her mother due to political processes, made the story unusually authentic.
“Although our play is principally about communism, we did not want to just complain about forgotten historical problems with current relevance,” its director Jiří Nekvasil said. “Through the touching story of Horáková, we tried to find parallels with current political regimes and systems.”
Slightly more controversial was the RO Theater from the Netherlands and its provocative interpretation of Bertolt Brecht’s Baal, directed by Alize Zandwijk. At the very beginning of the play, the protagonist draws a big penis on his belly, which seems to symbolise his attitude towards gender roles. This is even more significant as a woman plays the part of Baal, a typically masculine character. On the other hand, the public appreciated the “terrific music” played by a musician who never leaves the stage and plays an incredible number of different instruments.
Although the 17th annual Divadelná Nitra festival featured dozens of performances, they were far from the only highlights of the rich programme. A great number of accompanying events taking place in the streets and various clubs were also meant to bring Nitrians closer to the festival and theatre.
“The festival embraced almost 130 concerts, exhibitions, workshops, film screenings, shows or happenings related to performing arts, thanks to which the locals really could say that Divadelná Nitra is their festival,” said Ondrejovičová.
Those interested in exhibitions could admire paintings as well as jewels, books and rocket models. The more active participants had a chance to learn juggling, painting, dancing and clay modelling. Probably the most culturally rich was the Saturday “White Night”, which included several nocturnal guided tours of the city centre and its principal monuments, as well as a six-hour-long poem marathon and various open-air concerts.
But the objective of Divadelná Nitra is to educate as well as entertain. A concrete result of these long-term efforts is the new publication 15+1, published in Slovak and in English, about the 16 festivals that have been held. Its authors, Darina Kárová, Lujza Bakošová and Soňa Šimková, officially introduced the book on September 28.
“Other, more urgent projects have always kept us busy – this is why we have only now managed to finish the [15-year jubilee publication].” They explained the riddle posed in the title of the book, which contains a comprehensive overview of the most important facts on “the biggest theatre festival and one of the most important cultural events in Slovakia” and offered some important advice regarding festival management and organisational issues.

Another instructional aspect of Divadelná Nitra has been reflected in manifold lectures and presentations taking place in the course of the festival. This year, a panel discussion called “Theatre and Audience – Experience” was the highlight of the programme aimed at theatre experts and professionals.

“The discussion focused on successful educational projects by dramatic institutions aiming to bring people closer to the theatre,” said Elena Kárová, manager of the event, adding that the topic was closely connected with “responsibility”, this year’s theme of the festival. “This initiative has resulted from the growing alienation of spectators from dramatic arts.”

Seven speakers from Slovakia, the Czech Republic, Hungary, France and Holland presented their methods and tools designed to combat this problem. The Rotterdam RO Theater for instance involved 13 young people from 16 to 26 with no previous theatre experience to four intensive workshops that culminated in a presentation before an audience of over 300.

Similarly, the Czech Children’s Opera Olomouc revived the ancient concept of school theatre, enabling children to participate in two operas, thanks to which they learned the rudiments of musical theory.

Kárová said that only after having heard all the presentations did she realise how important Divadelná Nitra was from the educational point of view.

“Although their contribution is indisputably important, the majority of the presented projects were meant just as short-term activities,” she told The Slovak Spectator.

“One should remember, however, that a lot of remarkable initiatives bring tangible results only after a longer period of time," she added.