Baal is about love and freedom

ACCORDING to the official site of the famed Dutch RO Theater, Bertolt Brecht’s Baal “is a rebel who wants to redefine all the rules and human values himself”. But in the provocative interpretation of the play directed by Alize Zandwijk, “herself” would be more suitable, for the usually masculine protagonist is a woman in this version. 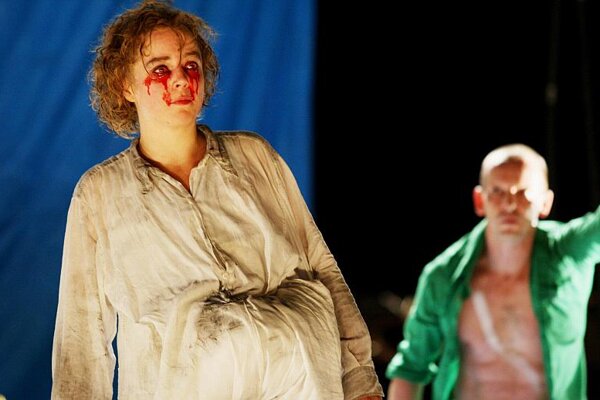 ACCORDING to the official site of the famed Dutch RO Theater, Bertolt Brecht’s Baal “is a rebel who wants to redefine all the rules and human values himself”. But in the provocative interpretation of the play directed by Alize Zandwijk, “herself” would be more suitable, for the usually masculine protagonist is a woman in this version.

Fania Sorel, a young Belgian actress living in the Netherlands who plays Baal, and who has recently won the Colombina Award for Best Supporting Actress, “frees herself from conventions, expectations and imposed morals,” according to the website. “She struggles free of a world that has become stuck in a groove and predictable.”

The Slovak Spectator spoke with the actress shortly after the performance, just as a fierce discussion on gender issues raised by the play had finished.

The Slovak Spectator (TSS): Are you surprised with the gender discussion that seems to have been provoked by your ensemble’s interpretation of Baal?

Fania Sorel (FS): Not at all. Discrimination due to someone’s sex is something we know in Belgium and Holland. But we should not accept it anymore. It can be eliminated only by unceasing protests and debates. That is why I am pleased to see that people talk about these problems. It is very important, because it promotes the emancipation of both genders equally. Hopefully we will one day agree on the fact that women have the same brain capacity as men and vice versa.

TSS: Was there any difference between the perception of the play in the Netherlands and here in Slovakia?

FS: As far as the aforementioned polemic is concerned, the reactions were the same; there were some people who liked it, and others who did not, which is completely natural. A slight difference could perhaps be noticed in connection with the fact that Baal was played by a woman. Slovaks seemed to be more surprised about that.

TSS: The performance was two and a half hours long, and you virtually never left the stage. Is it really possible to play at full throttle for such a long time?

FS: When we came to Nitra on the eve of our performance, the first thing everybody did was to go to the city centre to find a café, and I went to bed. This is the way to do it (laughing). But I usually do not feel as tired as one would expect, for the audience gives me so much energy that I could play even two such performances in a row. When on the stage, I literally absorb the public’s vibrations – their anger, tears or laughter.

TSS: Was Baal your first experience with Brecht?

FS: When I was seven years old, I saw a play of Brecht’s under a circus tent that really amazed me. Since then, I have always highly appreciated his work. When Alize offered me the role of Baal, I felt very pleased, but also afraid at the same time. Everybody knew him, everybody spoke about him in the most laudatory terms, so I was not sure whether they would accept me in the play. But during the rehearsals, I completely forgot my doubts and let Baal penetrate into my soul.

TSS: Have you learned anything from Baal’s character?

FS: Oh, I did, and a lot of things. Brecht’s play is about love and freedom. Through the character of Baal, the author encourages people to live their own lives, without always following the generally accepted moral rules set by the society. And there was another feature that significantly changed my life. Maybe it sounds strange from the mouth of an actress, but I am a very shy person. Baal taught me to stand up and protest against conduct I do not approve of. That was a hugely valuable lesson.