FOLLOWING an official visit from Slovak President Ivan Gašparovič on October 9, U.S. President George W. Bush stated that he expects Gašparovič to receive a "positive decision" by mid–November on whether the visa requirement for Slovaks will be officially lifted. 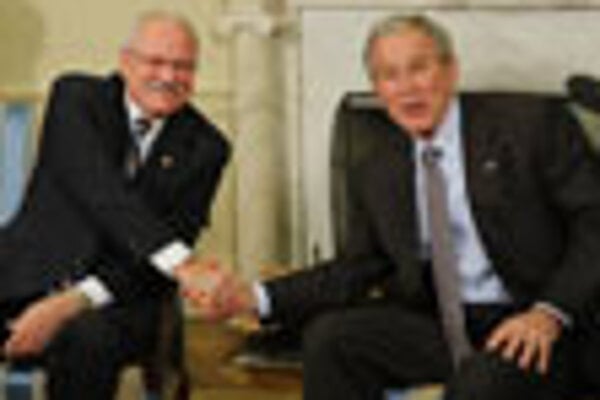 FOLLOWING an official visit from Slovak President Ivan Gašparovič on October 9, U.S. President George W. Bush stated that he expects Gašparovič to receive a "positive decision" by mid–November on whether the visa requirement for Slovaks will be officially lifted.

Some political observers are taking "mid–November" to mean November 17, which is a highly symbolic date because it marks the start of the Velvet Revolution in 1989, which brought down the already-crumbling communist regime in Czechoslovakia.

The cancellation of visas would add Slovakia to the 27 countries that participate in the Visa Waiver Program (VWP), which allows the citizens of those countries to visit the U.S. visa–free for tourism and other non–business purposes for up to 90 days at a time. Most VWP countries are from the European Union, but others include Japan and Brunei.

According to the SITA newswire, citing information from the U.S. State Department, once the visa requirement is officially abolished, Slovaks travelling to the U.S. will have to follow the new procedure which should come into effect for all citizens from VWP countries as of January 12, 2009.

The procedure requires that each traveller have a biometric passport and obtain travel authorisation from the Electronic System for Travel Authorization (ESTA) at least three days prior to arriving in the U.S.

Travellers apply for authorisation by submitting an application through the Department of Homeland Security’s website. The applicant will receive an e-mail notification soon after stating whether authorisation has been approved.

After arrival in the U.S., Slovaks' documents and fingerprints will be inspected by an immigration officer. Permission to enter the country does not mean permission to work there, the agencies emphasised.

Any Slovak who is turned down for travel authorisation can still apply for a visa at the U.S. Embassy in Bratislava.

The decision to move quickly toward lifting the visa requirement came after a report showed that the rejection rate for Slovak visa applicants had dropped below 10 percent. The countries have also successfully signed two important agreements.

“I commend our Slovak partners for this important step toward an expanded and more secure Visa Waiver Program,” Chertoff said, according to a DHS press release dated October 8. “Sharing law enforcement information is fundamental to combating transnational crime and discouraging criminal and terrorist travel."

The press release went on to state that the agreement "represents important requirements of the modernized VWP".

"They include better information sharing about international travel and border screening, improvements in information exchange on known and suspected terrorists, timely and comprehensive reporting of lost and stolen passports, and enhancement to airport and aviation security," it states.

Kaliňák emphasised that nothing in the agreement will invade Slovak travellers' privacy.
"It is absolutely safe," Kaliňák said, according to SITA.

The other agreement was the result of a Memorandum of Understanding that was signed this March during Kaliňák's visit to the U.S. It committed the countries to exchanging information about known and suspected terrorists.

Kaliňák signed it with U.S. Ambassador Vincent Obsitnik in Bratislava on October 2.
Before departing for the U.S., Gašparovič expressed his belief that the visa requirement would be dropped.

"I will return home with word that the visa duty will be cancelled," he said after a meeting with Ambassador Obsitnik on October 1.

The last time President Bush received a Slovak statesman was in March 2006, when former Prime Minister Mikuláš Dzurinda met him in the Oval Office. The last Slovak president to visit the Oval Office was Rudolf Schuster, who was there in June 2002.

During his meeting, which lasted between 40 and 50 minutes, Gašparovič also spoke with Bush about Slovakia's participation in the War on Terror, participation in NATO operations in Afghanistan, and about the situation in Georgia.

Rastislav Káčer, former Slovak Ambassador to the U.S. and current president of the non–governmental Slovak Atlantic Commission, told The Slovak Spectator that the U.S. could have abolished the visa for Slovakia and new EU members four years ago.

"It would have been a nice gesture from the U.S. and would not have presented a threat," he said.

“Slovakia was ready for that, and it is a pity that the U.S. has treated European countries in this differentiated way," he told The Slovak Spectator.

“I hope that we will learn how to use it to its full extent, and not abuse it," he added. "I am especially looking forward to young people having the opportunity to travel more easily."
The U.S. Congress passed legislation last year allowing for an expansion in the number of VWP countries, which included Slovakia.

The legislation required candidate countries to cooperate on sharing information necessary for security and law enforcement.