Crisis spreads: all bank deposits to be secured

FINANCIAL giants around the world are being forced to rely on infusions of government cash; central banks are trimming interest rates; stock exchanges are staggering from day to day; each of them watching warily for the next horror to emerge from the global financial crisis. 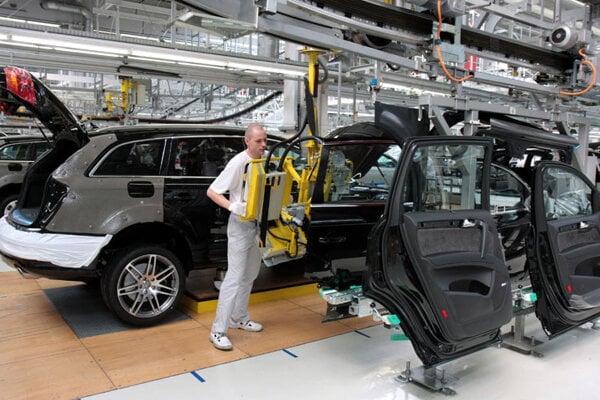 The car industry, which exports most of its production, might be affected by the current crisis (Source: SITA)
Font size:A-|A+

FINANCIAL giants around the world are being forced to rely on infusions of government cash; central banks are trimming interest rates; stock exchanges are staggering from day to day; each of them watching warily for the next horror to emerge from the global financial crisis.

Slovak politicians, bankers and analysts, meanwhile, have been busy trying to assess the likely impact that the crisis might have on Slovakia, keeping their fingers crossed for a happier outcome here. Roughly speaking, the hope is that Slovak financial houses will withstand the freeze in liquidity in American and European financial markets, and the economy, a slowdown notwithstanding, will avoid recession.

In preparation for possible trouble ahead, the government of Prime Minister Robert Fico is amending legislation so that the state will guarantee every crown (or euro) of customers’ cash deposited in Slovakia’s banks. Currently, deposits in Slovak banks carry a 90 percent government guarantee up to a maximum of €20,000.

The cabinet on October 8 approved a revision to the law on deposit guarantees in response to a decision by European Union finance ministers to raise the minimum level of guaranteed deposits to €50,000 across the EU. The ministers also pledged a unified approach to protecting financial institutions crucial to the Europe's financial system.

However, Prime Minister Fico was quick to announce that Slovak banks are safe, that the deposits of Slovak customers are not under any threat and that the move is a reaction to the recommendation of EU finance ministers to strengthen deposit protection.

“The draft [legislation] is, in a way, a demonstration of trust in the Slovak banking system,” said Finance Ministry State Secretary Peter Kazimír, as quoted by the SITA newswire. “We are in fact declaring that we believe in its safety and stability, and can therefore afford to make such a move.“

The state will now guarantee the deposits of private citizens, self-employed people, non-profit organisations, non-investment funds, foundations and other corporate entities which are not obliged to submit audited accounts.

The guarantee applies to all the deposits that citizens have with different banks. However, the state will not guarantee investments in mutual funds.

Market watchers interpret the move of governments Europe-wide to guarantee deposits as an effort to calm the situation rather than as decisions which might further weaken trust in the banking sector.

Confidence in the banking sector has already been tarnished and this is why the governments of some European Union countries have started taking measures, VÚB Bank senior analyst Martin Lenko told The Slovak Spectator.

“If it had not happened, the European banking sector would have been hit by a scenario similar to what took place a couple weeks ago in the United States,” Lenko said. “Thus I understand these measures as being intended to improve trust in the markets and at the same time create conditions which will help prevent the spread of complete panic and the domino effect which might be the result of financial problems with, or the crash of, a European bank, for example.”

Mária Valachyová, senior analyst with Slovenská Sporiteľňa, another bank, agrees that increasing deposit guarantees in banks and the support that governments have directed towards the European banking system is intended to calm potential worries among the population.

“I do not think that governments, by increasing guarantees for citizens’ deposits, will in fact increase their spending, particularly not the Slovak government,” Valachyová told The Slovak Spectator. “The Slovak banking sector is healthy and most probably the guarantees will not be used at all.”

Market watchers and analysts also suggest that there is much to learn from the current crisis since financial markets will never be the same.

Juraj Karpiš, an analyst with the INESS economic think tank, said that he interprets the move by governments as “an attempt to rescue everything that can be rescued”.

“The financial system in the way we know it today will have to go through fundamental changes,” Karpiš told The Slovak Spectator. “It seems that the system of central banking and state oversight of the financial market has not been able to prevent its collapse. It will be necessary to find a model which can erase from the system the moral hazard of the creditor of the last instance and the opportunity of banks to shift their losses onto the whole population.”

Karpiš said that customer panic and mass withdrawal of deposits could eventually cause problems even to relatively healthy banks.

“The government has been trying to prevent this by promising a full guarantee of deposits,” Karpiš told the Spectator.

The Slovak banking sector has previously undergone a consolidation process, whereby some institutions were forced to close and many became part of larger financial houses.

“Since there is surplus liquidity in the Slovak banking market, Slovak banks are not dependent on inter-bank financing and thus should be able to remain standing during the current turbulence on global financial markets without wider complications,” Lenko said.

Valachyová added that the surplus liquidity is visible through market interest rates, which are very close to the level of the central bank’s key interest rates.

According to Lenko, in Slovakia traditional banking, i.e. providing loans and deposits to domestic customers, has prevailed.

Investment banking, in the true sense, does not have deep roots in Slovakia and thus the risk profile of local banks is much better compared to the banking houses that have had problems over the past few weeks, Lenko added.

“Compared to American banking houses, the Slovak banks are very conservative and have been very cautious when it comes to providing loans,” Valachyová said. “Equally, I think that none of the banks has invested a large amount into US securities tied to mortgages.”

Karpiš agrees that the condition of Slovak banks when compared to their American peers is pretty solid.

“However, a significant economic slowdown might bring some problems for Slovak banks,” Karpiš added.

Slovakia exports a significant proportion of the goods it produces and the main question is therefore what impact the deepening crisis will have on the country’s economy.

“Considering the recent developments and the expected rapid slowdown in economic growth in the European Union in the coming quarters we have revised our forecast for real GDP growth for 2009 from 6.5 percent to 3.0 percent,” Lenko said. “However, the slowdown will be linked to the decrease in foreign and domestic demand.”

Slovakia is unlikely to be completely shielded from the crisis, but one way to ease its effects is to re-evaluate earlier financial plans and in particular planned investment activities, Lenko added.

Karpiš too predicts that economic slowdown will be the side of the crisis that Slovakia cannot escape.

“However, the slowdown in economic growth in the European Union is already happening today and the word recession is being mentioned not only relation to Ireland and Spain but also in association with one of the largest economies – France,” Karpiš said.

According to Karpiš, the negative effects on foreign demand for Slovak-made products could be partially compensated by Slovakia’s ability to attract manufacturers that want to reduce their expenses and who might move from more expensive EU member countries.

“However, in this competition with other new EU members, the further decline of the Slovak business environment, for example through price regulation or the reduction in market flexibility, certainly won’t help Slovakia’s chances,” Karpiš concluded.