A hometown race in Košice

"WE have won" were the final words uttered by Pheidippides, the Ancient Greek soldier who ran dozens of kilometres from Marathon to Athens, before collapsing.On October 5, just under 2,500 years later, the Košice Marathon took place under more peaceful circumstances, but with the same objective: run for dear life to bring your family at home (well, OK, up in the stands) a message announcing your victory. 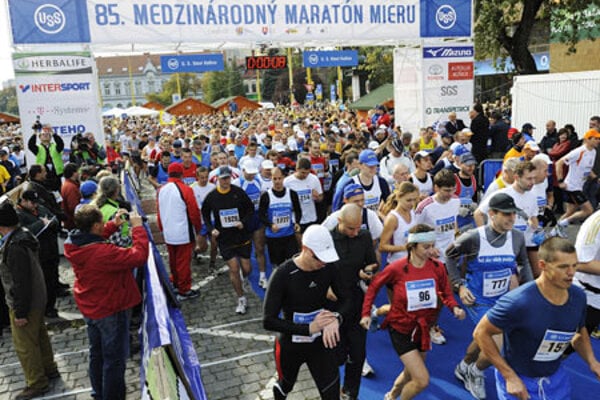 "WE have won" were the final words uttered by Pheidippides, the Ancient Greek soldier who ran dozens of kilometres from Marathon to Athens, before collapsing.On October 5, just under 2,500 years later, the Košice Marathon took place under more peaceful circumstances, but with the same objective: run for dear life to bring your family at home (well, OK, up in the stands) a message announcing your victory.

The Košice International Peace Marathon has taken place on the first Sunday in October every year since 1924, which makes it the oldest marathon in Europe and the second oldest in the world after Boston. Last week, more than 4,000 runners gathered at the starting line and prepared to compete in eight categories. Dejene Yirdaw, from Ethiopia, and his compatriot Selina Chelimo won the 42.195-kilometre race with times of 2:10:51 and 2:34:23 respectively.

"This year's results were more than satisfactory," said Štefan Daňo, the event’s chief organiser and president of the Košice Marathon Club. “Firstly, the number of participants was very high, and secondly, Dejene’s time was the second-best in the marathon’s history.”

Even the weather was better than expected, although it was far from ideal, Daňo said.

“We were extremely lucky,” he told The Slovak Spectator. "Heavy showers and strong wind were predicted for the day of the race. But when I woke up on Sunday, after a restless night, I was told: 'We take back the rain, but you'll have to accept the wind at least.' So I did," he explained, laughing.

Apart from the full marathon, a half-marathon (21.097 km), a mini-marathon (4.2 km), a hand-cycling race and an in-line skating race (20 km each) also took place. Arguably the most interesting was the non-competitive mini-marathon, since there were virtually no limits on who was allowed to participate. As a result, a mother with a pram and even a dog were seen among the crowd of nearly 1,800 runners.

Although the numbers were considerable, Daňo and his team still aim to recruit more people in the future.

“By 2010, we would like to raise the overall number to 5,000 participants in all categories,” he observed.

With as many as 34 nationalities among this year's runners, the Košice Peace Marathon fully deserves to be called "international". According to Košice Mayor František Knapík, such events are always a good opportunity to improve the town's profile.

"We host dozens of foreign guests annually who visit Košice not only to attend the marathon, but also to see our monuments," he remarked. "If we put the accent on this aspect, our town could benefit from 'marathon tourism'."

But the marathon obviously still belongs mainly to the locals. Every year, hundreds of families spend all of Sunday in the city centre, cheering the exhausted runners and applauding their success.

"The marathon has represented an important part of our cultural life for more than eight decades, which clearly explains why people are so keen on coming and supporting both local and foreign racers," Knapík told the Spectator.

But the families do not always stay sitting in the stands. Those who decided to take part in the race on Sunday together with at least one of their relatives received a special award from George F. Babcoke, president of U.S. Steel Košice, which co-organised the marathon. To set a good example for other participants, Babcoke ran the mini-marathon with his father Gary.

"It was my first marathon here in Košice, but the fifth I ran with my dad," he told The Slovak Spectator shortly after the race. "In comparison with the Chicago or Cleveland marathons, this one has a greater feel of a hometown event. It was really exciting for me to stand on the starting line, even for the mini-marathon, and watch all the community supporting us. Everything seems closer here. It just feels more 'at home' in Košice."