NON-GOVERNMENTAL organisations have repeatedly raised the alarm over allegations of political cronyism, saying that Slovakia has become increasingly insensitive to obvious corruption, and that even corruption itself has increased. But in response Prime Minister Robert Fico has accused NGOs of having become part of the opposition, and attacked them for criticising the ruling coalition’s leading members. 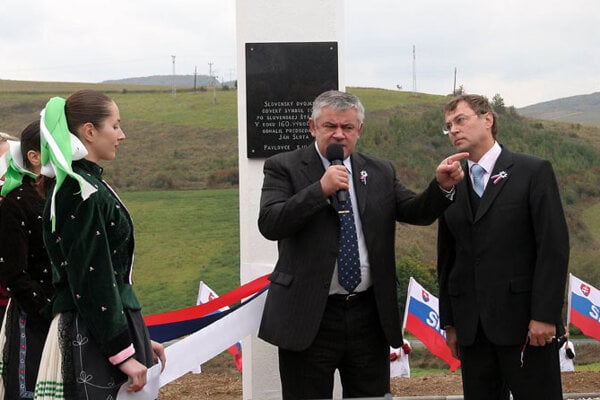 NON-GOVERNMENTAL organisations have repeatedly raised the alarm over allegations of political cronyism, saying that Slovakia has become increasingly insensitive to obvious corruption, and that even corruption itself has increased. But in response Prime Minister Robert Fico has accused NGOs of having become part of the opposition, and attacked them for criticising the ruling coalition’s leading members.

Transparency International Slovakia (TIS), the Fair Play Alliance - both non-governmental watchdogs - and the Institute for Public Affairs (IVO) - a non-governmental think-tank – all agree that the ruling coalition has ignored instances of blatant cronyism by its representatives.


The IVO has even said that the governing coalition is now openly inclined towards favouring its supporters by using public funds.

As an example from recent days, NGOs cite the fact that on October 5 Ján Slota, the leader of a junior coalition partner, the Slovak National Party (SNS), was taken to a party event in the village of Pavlovce in eastern Slovakia by a helicopter owned by a private company, EHC Service. The company has been awarded several lucrative government contracts during the term of the current coalition.

Moreover, according to the Pravda daily, Slota’s car received a police escort with flashing blue lights to the village, where he unveiled a large Lorraine Cross. The ceremony was organised by the SNS.

The right to receive a police escort with flashing blue lights, and thus avoid normal traffic rules, is reserved for only the president and government ministers, according to the SITA newswire. They were granted this right in order not to be held up when travelling to important meetings. However, the only cabinet member present in Pavlovce was Finance Ministry State Secretary František Palko, an SNS nominee.

According to the prime minister’s spokesperson, Silvia Glendová, even Fico does not normally use the police blue lights.

Viktor Plézel, spokesman for the Police Presidium, said the police do not attend party meetings and if someone asks the police to provide a service for commercial reasons, he or she must pay for it.

Fico refused – through his spokesperson – to say whether he thought Slota had used the helicopter and police escort without authority, and whether he considered their use acceptable.


“I really will not comment on [Slota’s] means of transport,” Glendová told the Pravda on October 9.

According to an SNS spokesperson, Jana Benková, the media reacted improperly to news about Slota’s means of arrival at the unveiling of the Lorraine Cross. She dismissed media coverage of Slota’s transport as “wicked hints” and as “baseless”, adding that the media were not interested in the event in Pavlovce, but rather in the SNS leader’s means of transport to it.

“The helicopter flight to the event in Pavlovce was provided by the Regional SNS Council in Prešov because of Ján Slota’s tight schedule, according to which he had to move quickly from a business meeting to the site of the event.”

In connection with the use of a police escort, Benková told the media: “All measures were aimed solely at ensuring security and the peaceful running of the event.”

The regional head of the SNS in Prešov, Anton Korba, confirmed to Pravda that the party did not pay for Slota’s transport.

“He was taken there by our acquaintances. So what?” he said when asked about the flight. “It’s like when someone gives you a lift. Today, it is common for people to have helicopters,” Korba added.

Moreover, on October 13, the SNS press department published the request sent by Korba to the district police in Vranov nad Topľou, asking police to accompany Slota to Pavlovce. In it, Korba asked for a police patrol during the erection of the Lorraine Cross, as well as during the unveiling ceremony. “We also ask for traffic to be stopped for a short time on the no. 18 road in the village of Podlipníky for the transport of delegates from the restaurant Lietadlo to the site of the unveiling,” the request reads.

The police explained their presence by saying that SNS representatives reported to the municipal police in nearby Hanušovce that a government delegation would be coming. Plézel confirmed to The Slovak Spectator that the police were currently examining what happened.

EHC Service did not reveal how much Slota’s trip had cost. The company is owned by Peter Korba from Prešov and, through Grafobal Group, is also connected to tycoon Ivan Kmotrík.

EHC Service was awarded, by direct order (i.e. without a public tender), a contract by the Interior Ministry to monitor the country’s eastern border worth Sk20 million (€664,000).

It receives Sk5 million more (€166,000) each year from the Defence Ministry to train military pilots.

After news of Slota’s trip emerged, Transparency International Slovakia (TIS) filed a motion with the parliamentary committee dealing with conflicts of interest involving public officials over Slota’s trip to Pavlovce.

Emília Beblavá, head of TIS, told The Slovak Spectator that cases like Slota’s are now symbolic of how Slovak politicians behave. “Currently, we are seeing cases of party cronyism and abuse of public authority for personal benefit which have nothing to do with the public interest,” Beblavá said.

If a private company flew Slota in its helicopter simply out of gratitude for having received several public contracts, then, according to Beblavá, Slota should have notified the parliamentary committee on conflicts of interest in the first place. “This is the place to announce gifts and donations,” Beblavá explained.

She added that since the company is connected to government expenditure through the public contracts which it holds, it is very probable that its interest in currying favour with a public official was self-serving.

“If this is a barter, then of course it is an even bigger problem than the fact that [Slota] has not fulfilled his duty of notification.”

Beblavá said she regards Slota’s police escort as inappropriate and improper but that it is a matter for the police. According to her, it is unthinkable that any politician in Slovakia would use a police escort in order to make a lecture somewhere.

Recently, Beblavá resigned from a work-group which had been set up by Prime Minister Fico to implement a national anti-corruption programme. She explained her departure by saying that the group had not done any work, despite its comparatively long existence.

Last year, TIS filed a proposal containing 30 measures and legislative or administrative changes that should be adopted to remove space for corruption; so far the NGO has received no response to the proposal.

At the same time, the government has not proposed any alternative.

“The opportunity to make serious changes to the system which would limit the space for corruption is currently virtually zero,” Beblavá added.

Following Beblavá’s move, the prime minister, again speaking through his spokesperson, said that that the government welcomed it. “With this step, Beblavá merely declared openly that she would work for the opposition and against this government,” Glendová said on the public-service TV channel STV on September 30.

At the beginning of this month, the head of the IVO, Grigorij Mesežnikov, said that the governing coalition is now more openly inclined towards cronyist methods, and neglects the principle of impartiality as the basis for democratic rule. On October 3, Robert Fico reacted to this with a statement echoing his earlier attack on Beblavá: “We consider the IVO an institute which is absolutely inclined towards the rightist opposition. For us, it is not trustworthy, and we do not pursue such issues.”

According to the head of the Fair Play Alliance, Zuzana Wienk, the law on conflict of interests is so poorly worded that even Slota’s free helicopter ride, probably worth tens of thousands of crowns, probably doesn’t violate it.

“Probably it would be difficult to prove that Slota profited in connection with his post of MP,” Wienk told The Slovak Spectator. “I see it as a huge gap in the law.”

According to her, it is barely believable that the company would provide Slota with such a service for free if he were not an influential politician.

“The fact that politicians can use these benefits and advantages without sanction, and that neither the law nor checks can secure the remedy, is an absurd mockery of citizens,” Wienk said.

Wienk thinks Fico’s attacks on NGOs are because they have highlighted some problems with the governing style of the current coalition which are very dangerous.