All but two banks profited in first half of 2008 MOST of the banks operating on the Slovak market reported a profit in the first half of this year, with the sector netting a total of Sk10.477 billion (€347.8 million). Only two foreign bank branches posted a loss.

Compiled by the Spectator staff from press reports
External contributor 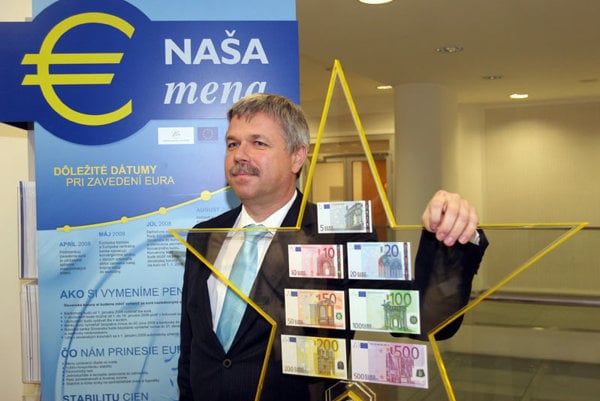 All but two banks profited in first half of 2008

MOST of the banks operating on the Slovak market reported a profit in the first half of this year, with the sector netting a total of Sk10.477 billion (€347.8 million). Only two foreign bank branches posted a loss.

HSBC ended in the red due to investment in personnel services. Its also invested heavily in forming new commercial trade channels. BRE Bank SA, a branch of the foreign bank that shelters the electronic banking division of mBank, also ended in the red. The internet bank has been active on the Slovak market since November 2007 and expects to be operating at a loss until 2012, the SITA newswire reported on August 11.

Slovakia’s banking sector saw profits rise by 9.7 percent year-to-year in H1 2008. The profits from the three largest Slovak banks – Slovenská Sporiteľňa, VÚB Banka and Tatra Banka – accounted for approximately 62 percent of that, or Sk6.522 billion (€216.5 million), which was an increase of 8.5 percent year-to-year. Net interest income contributed most to the positive results, while year-to-year growth was reflected in the rapid increase in loans.

Slovenská Sporiteľňa posted the highest profit, Sk2.407 billion (€79.89 million), as a result of a rise in the volume of loans and deposits. VÚB Banka followed with a profit of Sk2.274 billion (€75.48 million). Tatra Banka was third with Sk1.841 billion (€61.11 million). UniCredit Bank also earned a profit of over Sk1 billion (€33.19 million), reporting slower year-to-year growth in costs compared to revenues. J&T Banka posted the highest year-to-year increase in profit, when its taxed profit rose 108.7 percent to Sk115.8 million (€3.844 million).

Not counting the National Bank of Slovakia (NBS), 17 commercial entities and eight branches of foreign banks are active on the Slovak market.

mBank registers 45,000 clients as of September


A RECENT analysis shows that BRE Bank SA made a good decision in launching mBank, an internet bank, in Slovakia.

Since starting operation 10 months ago, the virtual bank, which is an electronic retail banking division of one of the biggest Polish financial institutions, has registered more than 45,000 clients, who have opened 70,000 savings and current accounts, the SITA newswire wrote in early October.

“In September, the bank reached a record number of new clients and newly-opened accounts since its entry into the Slovak market,” bank spokesperson Marek Michlík told SITA.

Michlík said the bank had set a target of 100,000 clients within three years, but that he now believes it will achieve that much sooner.

The bank’s volume of deposits reached Sk4.7 billion (€156 million) at the end of September. The volume of mortgages drawn exceeded Sk1.25 billion (€41.49 million). And the volume of consumer loans without a specific purpose amounted to Sk43 million (€1.427 million).

mBank is currently in the advanced stages of preparing and testing services for corporate clients, credit cards and investments in mutual funds, Michlík said.

“Nevertheless, the international product team is now primarily focusing on preparing the system for the transition to the euro, also at the expense of new product development,” Michlík said. “Euro conversion is for mBank, as well as for all banks in Slovakia, the strategic project of the year.”

mBank specialises in providing bank services to large-scale corporate entities, international corporations and small and medium-sized businesses. BRE Bank SA is a member of the Commerzbank group, the second largest private bank in Germany, and holds a 70 percent stake in Poland-based BRE Bank.

DESPITE being focused on euro adoption, ČSOB and Istrobanka, which are merging as of late 2009, have started providing some joint services.

The first step in the banks’ gradual merger is the sale of selected ČSOB products at Istrobanka branches. Daniel Kollár, ČSOB’s director general, announced at a press conference on September 30 that the banks have been analysing the cross-sale of products since July, the SITA newswire wrote.

“We have to complete the entire accounting and regulation process, and that is difficult,” Kollár said.

Both banks are currently preparing separately for euro adoption.

Miroslav Paulen, director general of Istrobanka, said that the three months of cooperation between Istrobanka and the ČSOB finance group have resulted in integrated savings, investment, and insurance products. For Istrobanka clients this means the option of using the foreign payment system in the Czech Republic and the chance to invest in ČSOB funds at an Istrobanka branch. The advantages for ČSOB clients include more options in car insurance policies.

All clients will benefit from the banks’ 224 interconnected ATMs and 152 branches.

“After just three months of working together, our first products and services and first benefits for clients are already visible,” Kollár stated.

The other aspects of the merger include building a unified managerial structure and gradually unifying management at lower levels. Kollár said it will also be necessary to analyse the network of branches, which after the merger will probably be optimised.

“The combined products that we offer are just the beginning,” he said. “The number will grow.”

ČSOB became a subsidiary of the KBC group in 1999. Istrobanka was founded in 1992 and acquired by BAWAG P.S.K. in 2002. This March, BAWAG sold its shares in Istrobanka to KBC. The transaction received approval from the National Bank of Slovakia and Anti-Trust Office in July.

Banks set to compete for Sk30 billion under mattresses

But that may change as euro adoption draws closer. The government’s official information campaign on adopting the common European currency recommends depositing Slovak crowns into a bank account as the safest and cheapest method for converting it into euros, which will be performed automatically on January 1.

This has set off fierce competition among banks, which have been offering higher interest on term-deposit accounts. Up to now, the yield for a one-year term-deposit account was 4 percent, which means depositing Sk100,000 (€3,319) would have earned Sk3,240 (€107.55) after fees. Accounts for 18 to 24 months offered interest of between 4.3 and 4.5 percent.

But VÚB is now offering 4.5 percent on one-year accounts, regardless of the sum deposited. Tatra Banka and Slovenská Sporiteľňa are offering the same.

UniCredit Bank is spicing up the market by paying interest on a term deposit upon opening the account. The downside is that the depositor cannot withdraw the sum from the bank prior to its maturity date, not even for a fee.

“These are interesting yields,” said Pavol Ďurkovič, a financial adviser to the AWD company. However, he added, people might still choose savings accounts, which provide slightly lower interest, but allow the money to be withdrawn at any time.

“Last year, Slovak households kept almost half of their money in banks and about 15 percent in cash,” the UniCredit Bank analysis states. This year, the share of cash will be reduced to 11 percent and bank deposits will rise to 51 percent, it predicts.

When compared with investment patterns in Western Europe or the US, Slovaks are still far more conservative.

A number of statistics show that Slovaks prefer to deposit money in classic bank accounts or fixed-time deposits than shares, mutual funds, or insurance policies. Analysts predict that this trend will continue in the coming years.

Šramko named ‘Governor of the Year’

The award ceremony took place during an annual meeting of the International Monetary Fund and the World Bank in Washington, DC.

According to Taimur Ahmad, the magazine’s editor-in-chief, Šramko received the award for navigating Slovakia’s introduction of the euro, especially concerning the fulfilment of the Maastricht criteria, including the stability of the crown’s exchange rate in the ERM II and keeping prices stable during a time of rapid rise in the cost of global raw materials.

Šramko has already received a similar award twice. In January 2006 he was declared the Central Banker of the Year by British publication The Banker and in the same year he received his first award from Emerging Markets.